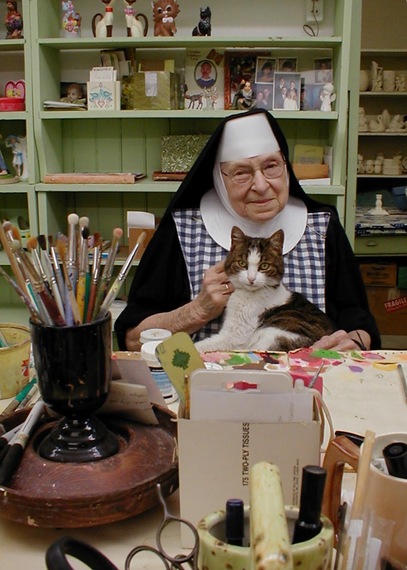 There is a beautiful interplay between the old and the young. Lessons exchanged. Inspiration shared. Secrets and miracles handed from one to the other. This relationship is what sustains the cycle of life, and propels the world forward.

At age 31, lost and disoriented at a crucial crossroads in my life, I met 87-year-old Sister Augustine. Barely over five-feet tall and attired in a traditional, head-to-toe black habit, she ran the ceramic shop on the grounds of a 150-year-old convent. Long forgotten by the world, she worked quietly in her studio six days a week.

Over the course of five years and hundreds of visits, Sister handed me the blueprint for finding peace and happiness at any age, and showed me how living life to the fullest is as much a state of mind as it is a rare gift to be cherished.

Be humble.
Sister Augustine wore the same threadbare black cotton robes every day. The coif portion of her classic habit was crafted from a recycled white Clorox bottle. She had no need for a fancy wardrobe. Nor for other meaningless things.

"These days, everyone wants something bigger or more than their neighbor has. It's rare to hear of someone who wants a bigger heart, a bigger faith, or a bigger sense of gratitude for what they already have. This kind of materialism and attachment makes people greedy and territorial," Sister said, adding how that "isn't what really matters."

Observing her during our weekly visits, I realized that God and her calico cat named Blitzen were what made her heart sing. And her greatest pleasure wasn't in material possessions, but in being able to share her talents as an artist and a mentor. The simple things are what got her out of bed every morning and added the spring to her step.

Be connected.
Sister Augustine always reminded me how our relationships to one another--our natural connections to every other living being--are priceless and irreplaceable. These bonds are what nudge us forward, through good times and bad.

"We can't survive without touch and a connection to each other. From the time we're born, we need to be held and nurtured," Sister said. "We need to feel that we belong to a family and, once we grow older and become more aware, we then understand the need to belong to something greater than ourselves."

In sharing our lives with one another--laughing, creating, exploring the universal questions we all have--Sister and I made the most of the time we had. We added value to the precious minutes and hours, not in dollars and cents but in smiles, wisdom, and memories.

Be mindful.
"So often these days, people walk around blind when their eyes are wide open," Sister Augustine once told me. "They fail to see what's right in front of them."

One afternoon, I came upon Sister in her flower garden. I watched as she gently cupped a flower in her hands, examining it closely, petal by petal. She then pinched off a withered leaf, letting it fall the short distance to where it would serve a new purpose. Next, she straightened the bent stem of a young floret, allowing it to fully bask in the sunlight.

Sister Augustine's mindfulness in all things taught me the benefits of pausing. The frenzied world is what distracts us from true beauty and from experiencing life. Age had enlightened my friend to the joy of being unhurried, unencumbered, and fully aware. Thanks to her, I glimpsed Heaven on earth.

Be curious.
In many ways, Sister Augustine was like a sponge, absorbing information. I would tell her about my time working in the Vice President's Office at The White House or as a celebrity publicist in Nashville, among other adventures. These were foreign worlds to a cloistered nun, who had entered the convent during the early years of The Great Depression.

Just as I thirsted for her to reveal the answers and meanings to the questions I had about belonging, purpose, spirituality, rejection, and lifelong struggles, it was Sister's own pursuit of knowledge that kept the world new and fresh for her. Her curiosity continually opened her mind and fueled the sheer awe she had for life.

"Life never stops surprising you, or teaching you new lessons," my friend often said, followed by her signature chuckle and the twinkle in her eyes.

Be unfinished.
The Bucket List--an ultimate race against the clock to check off experiences and achievements before we die--has become a popular symbol for living life to the fullest. But Sister Augustine didn't believe in bucket lists per say. At least not the conventional kind of list that has an endpoint when one can declare the mission completed. Because, then what?

For Sister, life was infinite, even here on earth. A bottomless trove of new possibilities and creations. And when the end comes--the "reward" as she called it--being in mid-stride is only further confirmation that no moment was wasted.

"Life is meant to be an unfinished piece of work that others carry on in some way after you've gone," Sister Augustine said. "That way there truly is no beginning and no end." 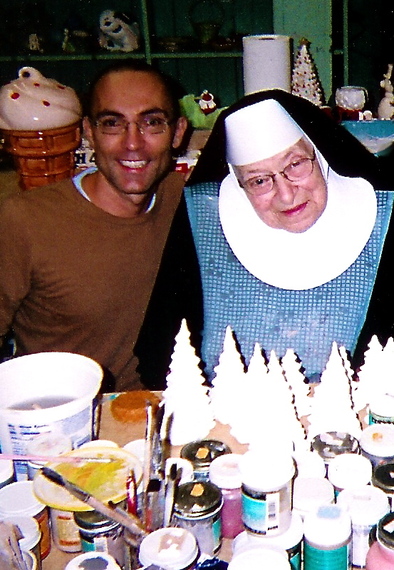 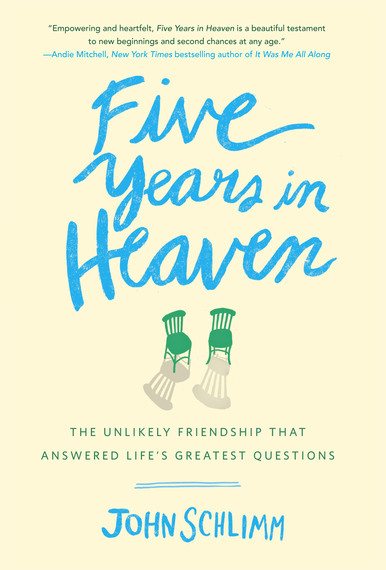