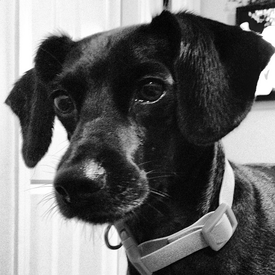 This is Chet. He is my 3-and-a-half-year-old rescue dog, the light of my life and the bane of my existence. What he lacks in good behavior (hint: a lot) he makes up for in being the cutest, funniest and most loving little dog in the whole wide world. He has also taught me a lot about life.

Almost any other dog owner you ask would say the same thing about their own canine companion, and they would genuinely mean it. Dogs may eat food off of the ground, go to the bathroom outside and say "hello" by sniffing behinds, but we're the ones who have a lot to learn.

1. Actions speak louder than words.
Dogs can't talk, but that doesn't mean they can't communicate. A wag of the tail or a quick look into your eyes will tell you everything you need to know. If subtle isn't your pooch's style, they'll find a more expressive (ever heard of an on-purpose accident?) way to get their point across.

2. Go with your gut.
If you're nervous, excited or otherwise, own it. Let it out. Act on it. People are inclined to suppress their instincts for the sake of rationality, but dogs don't care enough to keep things bottled up. No, the mailman hasn't tried to murder us yet. He hasn't really done anything that justifies a full-on door-rushing frenzy every single afternoon. But we're keeping an eye on him, just in case.

3. Never underestimate yourself.
Unlike people, dogs don't let their fear of failure hold them back. This confidence, though occasionally inflated and misguided, is what keeps our canine counterparts tirelessly trying to lick whatever is on our plates, climb trees in search of squirrels and dig holes that lead to goodness knows where.

4. Don't take the little things for granted.
As humans, we not only fail to appreciate but have a tendency to complicate the simplest of things. Dogs, however, couldn't be more different. They are content with a calendar solely dedicated to napping, taking walks, playing and indulging in the occasional belly rub.

5. Love like crazy.
Is there anything better than coming home from the grocery store and being greeted like a war hero returning from active duty? Dogs love unconditionally and, even better, unapologetically.