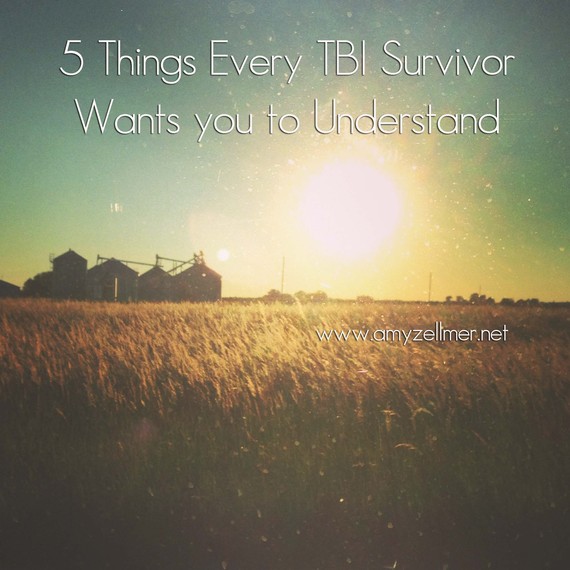 March is National Brain Injury Awareness Month, and as promised, I am writing a series of blogs to help educate others and bring awareness to traumatic brain injuries (TBI).

1. Our brains no longer work the same.
We have cognitive deficiencies that don't make sense, even to us. Some of us struggle to find the right word, while others can't remember what they ate for breakfast. People who don't understand, including some close to us, get annoyed with us and think we're being "flaky" or not paying attention. Which couldn't be further from the truth, we have to try even harder to pay attention to things because we know we have deficiencies.

Martha Gibbs from Richmond, VA, suffered a TBI in May of 2013 after the car she was a passenger in hit a tree at 50 mph. She sums up her "new brain" with these words:

Almost 2 years post-accident, I still suffer short-term memory loss and language/speech problems. I have learned to write everything down immediately or else it is more than likely that information is gone and cannot be retrieved. My brain sometimes does not allow my mouth to speak the words that I am trying to get out.

2. We suffer a great deal of fatigue.
We may seem "lazy" to those who don't understand, but the reality is that our brains need a LOT more sleep than normal, healthy brains. We also have crazy sleep patterns, sometimes sleeping only three hours each night (those hours between 1 and 5 a.m. are very lonely when you're wide awake) and at other times sleeping up to 14 hours each night (these nights are usually after exerting a lot of physical or mental energy).

Every single thing we do, whether physical or mental, takes a toll on our brain. The more we use it, the more it needs to rest. If we go out to a crowded restaurant with a lot of noise and stimulation, we may simply get overloaded and need to go home and rest. Even reading or watching tv causes our brains to fatigue.

Toni P from Alexandria, VA, has sustained multiple TBI's from three auto accidents, her most recent one being in 2014. She sums up fatigue perfectly:

I love doing things others do, however my body does not appreciate the strain and causes me to 'pay the price,' which is something that others don't see. I like to describe that my cognitive/physical energy is like a change jar. Everything I do costs a little something out of the jar. If I keep taking money out of the jar, without depositing anything back into the jar, eventually I run out of energy. I just don't know when this will happen. Sometimes it's from an activity that seemed very simple, but was more work then I intended. For me, like others with TBIs, I'm not always aware of it until after I've done too much.

3. We live with fear and anxiety.
Many of us live in a constant state of fear of hurting ourselves again. For myself personally, I have a fear of falling on the ice, and of hitting my head in general. I know I suffered a really hard blow to my head, and I am not sure exactly how much it can endure if I were to injure it again. I am deeply afraid that if it were to take another blow, I may not recover (ie, death) or I may find myself completely disabled. I am fortunate to have a great understanding of the Law of Attraction and am trying my hardest to change my fears into postive thoughts with the help of a therapist.

Others have a daily struggle of even trying to get out of bed in the morning. They are terrified of what might happen next to them. These are legitimate fears that many TBI survivors live with. For many, it manifests into anxiety. Some have such profound anxiety that they can hardly leave their home.

Jason Donarski-Wichlacz from Duluth, MN, received a TBI in December of 2014 after being kicked in the head by a patient in a behavioral health facility. He speaks of his struggles with anxiety:

I never had anxiety before, but now I have panic attacks everyday. Sometimes about my future and will I get better, will my wife leave me, am I still a good father. Other times it is because matching socks is overwhelming or someone ate the last peanut butter cup.

I startle and jump at almost everything. I can send my wife a text when she is in the room. I just sent the text, I know her phone is going to chime... Still I jump every time it chimes.

Grocery stores are terrifying. All the colors, the stimulation, and words everywhere. I get overwhelmed and can't remember where anything is or what I came for.

4. We deal with chronic pain.
Many of us sustained multiple injuries in our accidents. Once the broken bones are healed, and the bruises and scars have faded, we still deal with a lot of chronic pain. For myself, I suffered a considerable amount of neck and chest damage. This pain is sometimes so bad that I am not able to get comfortable in bed to fall asleep. Others have constant migraines from hitting their head. For most of us, a change in weather wreaks all sort of havoc on our bodies.

Lynnika Butler, of Eureka, CA, fell on to concrete while having a seizure in 2011, fracturing her skull and resulting in a TBI. She speaks about her chronic migraine headaches (which are all too common for TBI survivors)

I never had migraines until I sustained a head injury. Now I have one, or sometimes a cluster of two or three, every few weeks. They also crop up when I am stressed or sleep deprived. Sometimes medication works like magic, but other times I have to wait out the pain. When the migraine is over, I am usually exhausted and spacey for a day or two.

5. We often feel isolated and alone.
Because of all the issues I stated above, we sometimes have a hard time leaving the house. Recently I attended a get together of friends at a restaurant. There were TVs all over the room, all on different channels. The lights were dim and there was a lot of buzz from all of the talking. I had a very hard time concentrating on what anyone at our table was saying, and the constantly changing lights on the TVs were just too much for me to bear. It was sensory stimulation overload. I lasted about two hours before I had to go home and collapse into bed. My friends don't see that part. They don't understand what it's like. This is what causes many of us to feel so isolated and alone. The "invisible" aspect of what we deal with on a daily basis is a lonely struggle.

Kirsten Selberg from San Francisco, CA, fell while ice skating just over a year ago and sustained a TBI. She speaks to the feelings of depression and isolation so perfectly:

Even though my TBI was a 'mild' one, I found myself dealing with a depression that was two-fold. I was not only depressed because of my new mental and physical limitations, but also because many of my symptoms forced me to spend long periods of time self-isolating from the things -- like social interactions -- that would trigger problems for me. With TBI it is very easy to get mentally and emotionally turned inward, which is a very lonely place to be.

I invite you to join my TBI Tribe on Facebook if you are a survivor, or loved one of a survivor.