By the age of 27, I was relatively sure I had a firm grasp on my sense of self. I was confident of my strengths, aware of my weaknesses and straddled both in my own personal comfort zone. Then I gave birth to my first child, followed by our five younger children. I'd read What To Expect When You're Expecting, so I was all set, right? But becoming a mother altered not only the way that I perceived the world, but also the way that I perceived myself.

1. The Fear
I still vividly remember securing our newborn daughter into the backseat of our car for the ride home from the hospital. The sky was a vivid blue, the trees a vibrant green. But what I noticed was the exhaust from the idling car next to us, which seemed to be wafting way too close to our precious daughter's pristine lungs.

The reality of being tasked with the survival of a tiny, helpless human being is an awesome responsibility. And on the heels of 9/11, the world seemed like a dark, scary place for my precious infant to inhabit. When you feel such deep, unbound love for your child, suddenly, you see the horrors that you might have been oblivious to prior. Every tragic news story involving the illness or passing of a child brings tears to a mother's eyes. Why? Because she doesn't just read it, she feels it. To know what the bond is like between a mother and her child and to imagine it broken is an unexpected emotional burden for a mother.

2. The Massive Physical Exhaustion
Obviously, both pregnancy and delivery are expected to be physically demanding. I was prepared for those aspects. Well, as prepared as one can be to push a human being from your body. What I underestimated, however, was how physically intense the whole motherhood role is ALWAYS.

The moment this became clear to me was on a groggy morning three weeks into my daughter's life. As I nursed my lukewarm coffee, the thought came to me, I'll never sleep late... again. Even after the throes of infancy, sleeping in with six kids is still a distant dream. It's not just the sleep deprivation, however, which you expect. It's the constant lifting, the lugging, the scrubbing of spills, the quick dashes after a toddler barreling toward an open door or exposed staircase. It's the hours of walking a wailing infant back and forth in the wee hours of the night. Ooh, my aching muscles. If only I had time for yoga...

3. Self-Defeat
I've always had confidence in my ability to tackle challenges and to bring results. The problem with being a parent, particularly a stay-at-home parent, is that the workload is never really done. The challenges that come with raising a child, or multiple children, come at you from all sides, at any given moment. There are the messes, the sibling squabbles, never-ending housework, the endless curious questions and thankless random tasks. Sometimes, days that are chock-full of such challenges are enough to bring me to my knees. I knew it would be hard, but had NO IDEA just how impossible it would feel sometimes. I despise the feeling of failure, but there are those days where nothing goes right, and the only remedy is getting up tomorrow and beginning anew.

4. Primal Love
I knew I'd love my children, and I figured the love would resemble that I felt for my husband. And it did, but there was an even deeper, intense aspect to it. I couldn't fathom just how much I'd cherish those late-night nursing sessions, or how I'd delight in witnessing those first faltering steps. At all stages of their lives so far, there are those moments when I look at my children and my heart wants to burst at their beauty (both inside and out). It's that all-encompassing feeling that you'd sacrifice your own life for these tiny people. Or in a more simplistic way, you put their needs before your own... basically all the time.

5. The Urge To Do It All Over, Again, And Again...
When my husband and I decided to start our family, we never discussed how many children we'd like to have. If someone had told my 27-year-old self that I'd eventually be the mother of six children, I'd have ended up curled in a fetal position on the floor, whimpering softly. But I've discovered that as I nurture my children and help them to develop their character, they in turn have helped me to refine my own.

I'm a stronger person because of them. I'm becoming a more patient person than I ever would have been. I've been pushed to my limits of endurance, and have been forced to look inside myself at qualities that needed to change, yet would have been easy to conceal or avoid without being viewed through the eyes of an impressionable child.

I never expected it, but I welcome it. 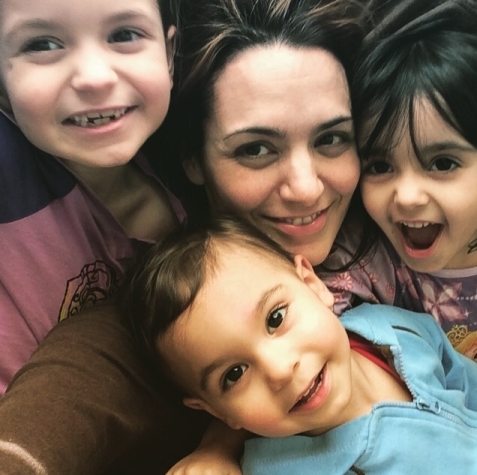 More:
ParentsParenting character
Newsletter Sign Up
Raise the kind of person you'd like to know
Subscribe to our parenting newsletter.
Successfully Subscribed!
Realness delivered to your inbox