"Seven years ago I was living in my little house in Haiti. Had anyone told me then that in 2012, I would be climbing the Great Wall of China with a diverse group of Boston students, I would have simply called them a liar!" - Stephane, 11th Grade

Stephane is one of 42 Boston Public Schools students with whom I toured Beijing last month. After a year of meetings, forms, and fundraising in preparation, our China trip turned out to be ... wonderful! Here are five lessons about education that I learned in the process:

1. Truth is often a gray area ... which is what makes teaching so complex.

"Wait," one student asked as our tour bus rumbled through Beijing, "I thought China was communist, so isn't everyone supposed to be equal? Why are there all these capitalist-style shopping malls everywhere?"

It's a lot easier to quiz students on textbook definitions of economic structures than to capture the capitalist-communist melange of China. China is growing at a breakneck pace: the fastest example in history. As our bus chugged past high-rise building after high-rise building, our guide, Li Jun, explained that just ten years ago, Beijing looked about 50 years less developed than it does today.

The words had not left Li Jun's lips when a horse-drawn wagon clip-clopped down the highway across from us. "WHOA!" screamed my students. "I have never seen a horse on the highway!"

But there's modern China for you, growing pains and all.

2. Kids are better than adults at not judging a whole group by a few individuals.

Maybe it's because the 30 students in each Boston classroom wouldn't want to be judged by the actions of their teacher or one of their classmates, but our kids were open-minded about China.

The Tiananmen Square Massacre of 1989, in which hundreds of protesters were killed by government forces, and other publicized actions of the Chinese government, have left many American adults to make generalizations about China. Media portrayals of China have encouraged us to stereotype the whole country as a repressive, ever-growing beast scheming to take over the world.

Not our students, though.

In Beijing, a highlight for students was eating dinner with a local family and sharing stories. "I thought Chinese people would be strict," one student reflected, "but they were happy and funny! I had a great time talking with them. It wasn't what I expected at all."

3. A great teacher can transform your experience.

Last summer, I visited China without a guide ... and totally hated it. Without being able to read anything or communicate, I was lost and frustrated.

In short, I was confused, so I was angry ... much like many of the students in American classrooms. It is infuriating to not understand something. It makes kids act up in classrooms, and it made me hate China.

On this February trip, however, my fury changed into enlightenment, thanks to our tour guide. Li Jun and his warm smile helped us all around Beijing, explaining the facts, statistics, and traditions in a way that made the baffling at last understandable. I could feel my mind expanding. What Li Jun did for us in Beijing, a great teacher can do for students in math, science, or any other daunting school subject.

4. The world is interdisciplinary and globally interconnected, so schools must be, too.

"Duh!" you might say, but when you work in a public school teaching English to 150 students a day, it takes serious effort to coordinate effectively with teachers of other subjects, let alone with schools in other countries. Often, it just doesn't happen.

And yet, in the span of five minutes in Beijing, we had lessons in:

• Math: Converting Yuan to dollars to buy stuffed panda dolls.
• Foreign Language: Attempting to converse with Chinese students.
• History: Discussing with our tour guide why there are pictures of Mao everywhere.
• English: Writing in journals about the frustration of Facebook being blocked.
• Science: Pondering whether a human can ingest a deep-fried scorpion in the Night Market and live to tell the tale.
•Physical Education: Striding across Tiananmen Square and the Forbidden City.

Moreover, swaying in the crowds of Beijing, we calculated: there are 1.34 billion people in China and 6.84 billion people in the world, meaning one in every five people on earth is Chinese. In the year 2012, our curriculum better be globally minded!

5. Global, hands-on learning has a humanizing effect on teachers and students alike.

During one week in China, our students gained a vastly richer understanding of themselves, their teachers, and our world.

In 2012, students benefit from learning that is global, hands-on, and out-of-the-box. Is this hard to pull off? Sure. But, hey, taking 42 students to China for a week was "hard to pull off" too ... and it was worth the effort.

Lillie Marshall is a Teach Plus Teaching Policy Fellow and teaches in the Boston Public Schools. She runs two teacher-travel websites, www.AroundTheWorldL.com and www.TeachingTraveling.com and tweets at @WorldLillie. 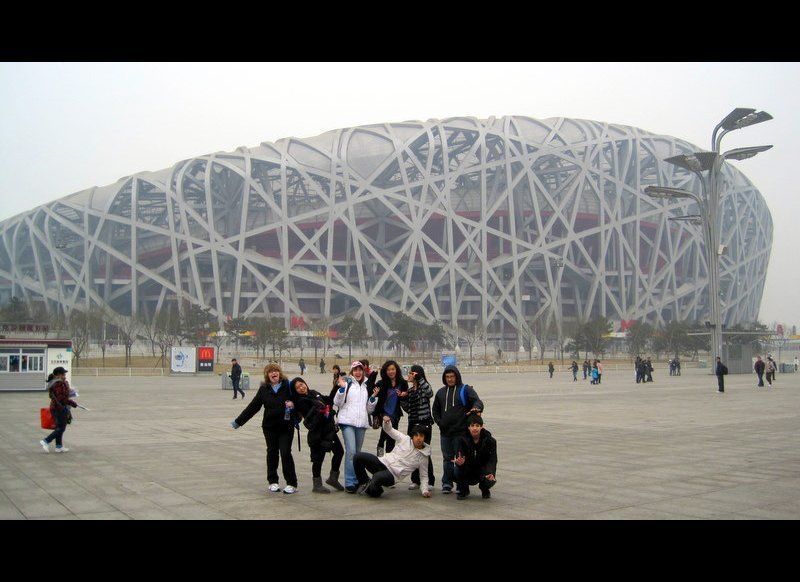 1 / 9
The Bird's Nest
Boston Public School students by the Bird's Nest in Beijing, built for the 2008 Olympic Games.