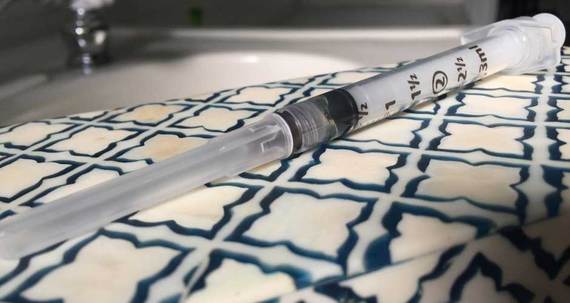 Disclaimer: This is my experience alone. I don't speak for any other transpeople or anyone else taking testosterone.

A one and half inch long needle penetrates deep into my muscle and pushes the culturally-prescribed masculinity into my system. The first few months of my testosterone injections I had no idea what I was opening in my soul, my mind and my body. I thought I was simply going to grow some hair. Hopefully only on my face and not my butt (spoiler: it grew on my butt). Maybe gain some muscle growth. It didn't occur to me that I'd gain a deeper understanding of the masculine mystique.

We all have different amounts of testosterone and estrogen drip, dropping in our bodies despite our assigned gender/sex. I made the deliberate decision to tinker with this tango. Here are a few things that have come from this experiment in hormonal chemistry:

1. The soul resides in the pituitary gland. Ok. Maybe not. But it sure felt like the influx of new hormones changed me in places I thought were untouchable. I was under the impression it was like remodeling the outside of the house. Yes, I'd get new and exciting changes, maybe a paint job, but I thought the interior would mostly remain the same. I was wrong. I was gutted. I felt different after my second shot. It was a carnal time in my life. From my second shot until about three years into my testosterone treatment I craved fleshly activities: eating, fucking and making money. I wanted everything to be high-risk and visually stimulating. Give it to me. Give it to me. That's how it felt. My emotional range went from having complex feelings about a bee struggling to escape my soda can to barely feeling a thing when my girlfriend was curled up and bawling. I questioned if we even have souls during this period. Dark. I know.

2. Sex IS amazing. I had complicated feelings around sex before I took T. My first girlfriend wasn't a lesbian and didn't embrace the whole thing very well. Plus, I was raised in a religion that equated my sexuality with burning in the deepest level of hell. So, you know. Guilt and shame. Not fun. Those feelings lingered through all of my relationships until T took hold. Finally. It freed me. Shame was smothered by desire and guilt extinguished in the warmth of a body pressed against mine. I felt my skin tingle and come alive. Now I knew why everyone was obsessed!

3. Masculinity is beautiful. Masculine bodies always had me borderline repulsed until my body began to masculinize. I associated them with brute, hair and stink. They seemed hard and clumsy. Then I watched the veins grow in my arms, my skin became coarse, fat dissolved and hair grew. I looked in the mirror and I still saw tenderness, grace and softness. I began to look at other masculinized bodies and realized they too held a feminine beauty that I had failed to see before T.

4. Emotional violence. Before T I wasn't one to lash out. I seldom got angry even in times when I should. I experienced verbal and physical abuse in a relationship before T and I did nothing. I was extremely submissive. After taking T I was able to use my voice and stick up for myself. Unfortunately, I also found the ability to be cruel. In moments of rage, I used words that couldn't be undone. I felt completely out of control. It took multiple screaming phone calls for me to realize I had to tame this beast. I no longer find myself reaching those points of anger but I still find myself getting unnecessarily annoyed and frustrated at the tiny things.

5. My body separates me. When I was a lesbian I'd go out to bars and immediately fit in with a group of girls. They'd draw me in and we'd be friends for the rest of the night. I was safely one of them. Guys rarely talked to me. I felt like the luckiest person in the room -- surrounded by the ladies. Then I took T and my facial features masculinized and I had top surgery. I'd walk into bars and girls would tighten their circles and turn their backs. As I stood in line to order a drink, dudes would make disturbingly sexist comments about women in the bar. I was lonely. If I tried to nudge my way into an all lady conversation I was treated like the dude trying to get in someone's pants. So, going out really lost its appeal. However, I was part of a new network of guys who treated me much better than when I was lesbian. I'd checkout at the grocery and the cashier would say, "Have a nice day, man." Or the gas station attendant would tell me, "It's going to be $28, boss." I'd practice these niceties at home. "Thanks, man!" "Yeah, buddy."

My dose of T has changed over the years. I started on a lower dose and have continued to drop my dose. My hormones usually read in the space between what doctors consider a 'man's' levels and a 'woman's' levels.** A space explored by many, yet left hidden in our language and in our society. I have no regrets in tinkering with my hormones. It's giving me the ability to see beyond the black and white and through the gray to realize we're a rainbow of hormones. This isn't a man's world and it ain't a woman's. It's our world. Bodies with differing amounts of hormones racing toward the sun.

**I put quotes because these are amounts established by a medical society that sees gender as a binary.

Read more of my work at leocaldwell.com