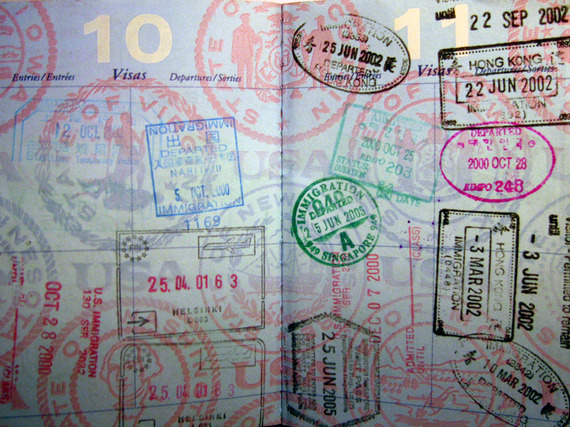 Eight years, eight cities: Buenos Aires, Melbourne, Bangkok, Berlin, Rome, Tel Aviv, Cape Town and Sydney, where I just relocated for a new job. And what do I have to show for all that time spent living outside the U.S.? The list goes on, but here are some highlights: at least twice as much romantic drama (and comedy) in half the time I spent in New York City, at least two books (the first, Is It True What They Say About Black Men?, is out Nov. 4), and at least five valuable lessons in love and lust.

There are good and bad ones everywhere, ones who'll love and leave you and ones who are as hot-and-cold as defective plumbing. Dating abroad can feel like Groundhog Day, only in different languages. When I first moved to Buenos Aires and guys kept immediately asking me the same question -- "Es cierto lo que dicen sobre los hombres negros?" ("Is it true what they say about black men?") -- I assumed it was an Argentine thing. In Buenos Aires, where there were so few black men, the curiosity, though crudely expressed, was understandable.

Then the ice-breaking question became a recurring theme in pretty much every city I visited and lived in, including Cape Town, where black men outnumber white men by a considerable margin. I wasn't expecting the black sexual mystique to apply there (I was once even asked by a black guy!), but South Africa's recent history of institutionalized segregation means black men remain as invisible in gay Cape Town as if they weren't there at all.

The common denominator here, though, isn't just the million-dollar lead-off question but what it implies: There's no escaping guys who are driven primarily by libidinal concerns. Men are not necessarily more romantic or relationship-oriented because they happen to be Italian, or whatever, and unless you're Katharine Hepburn in Summertime, you're not more likely to be swept off your feet by someone who speaks a Romance language. Dating is a crapshoot everywhere. The only certainty is that you'll meet an abundance of men with one-track minds, and the main thought running on that track will be motivated by the possibility of sex at the finish line.

Well, newsflash: Even if you meet a great guy while waiting to use the ATM on Istiklal Street in Istanbul or end up having drinks with the one admiring the Nefertiti bust beside you at the Neues Museum in Berlin, there's a good chance that he has a profile on Grindr or at least one of the other myriad Internet meet markets. And if you come back from the bathroom on your first date and catch him checking his Grindr messages, just be glad he waited until you weren't sitting across from him.

3. You never really know a guy until you're speaking the same language: his, not yours.

When it comes to speaking English vs. speaking Spanish, my true colors show when I'm not overthinking what to say, so I probably shouldn't expect someone speaking English as a second language to be any different, especially if he's far from fluent. And if he's speaking broken English, there are so many conversations that we're unlikely to have.

During my first trip to Buenos Aires, I met a guy named Martín whose grasp of English was well below rudimentary. At the time, I spoke even less Spanish, so I guess you could say that we communicated using the language of lust. Plus he loved the Carpenters. Despite his language limitations, he sang along perfectly to "Only Yesterday" and "Yesterday Once More," which made him suitably sensitive. I didn't really know him from Fernando, Alejandro or Gonzalo, but we bonded anyway over the course of my first few B.A. visits, because ignorance really is bliss.

I lost touch with Martín shortly after I moved to B.A. and didn't see him for about four years, until I ran into him on the street a few weeks before I left for good. When we hung out a few days later, we had our first-ever conversation in Spanish, and it was like talking to a different guy. The years hadn't changed him (or his love for the Carpenters). Understanding his language did. Among the things I learned that day: Work colleagues aside, he didn't associate with anyone who wasn't family, so spending time with me was his version of really going out on a limb. He avoided traveling by car because he thought of them as being generally unsafe. He hated traveling period because, well, what was the point? He was in his late-30s, and he'd never left Argentina and likely never would.

He was totally fine with that, which didn't make him any less of a lovely guy, but had I known that once we'd gotten over the language barrier, we'd have so little in common, we probably never would have made it to our second date.

4. If you're looking for a nice American boy, try finding him abroad.

Of all the American men who have ever approached me online or offline while overseas, I can't remember any of them ever saying anything about "fun," preferred sexual positions, or penis size (if non-black Americans are as curious about the legitimacy of that dreaded, dreadful myth, they've never let on with me), and I'm pretty sure that no American guy has ever sent me unsolicited nude shots. Online conversations with them have typically begun the way offline ones do -- "Hi. How's it going?" -- and then on to the small talk (as in actual small talk, not "Hung?").

I asked a black American friend who had spent a year living and studying in Cape Town for his take, and he suggested that being abroad and out of their comfort zone might bring out the best in American men. It's sort of like the way I am when I'm speaking Spanish. Because I'm less comfortable with the language than I am with English, my verbal expression tends to be more neutral than when I speak in English. My uneasiness from being out of my comfort zone creates the impression that I'm a lot nicer and more polite than I actually am. But from what this same friend told me, when American men return home and log on, No. 1 once again applies.

5. Anti-American sentiment around the world doesn't really apply to dating and going out.

The general population might still lump you in with Americans who talk too loud, don't speak a foreign language, wear track suits to the theater and tend to vote Republican, but when you go out at night, you might get treated like a VIP, especially if you're visiting from New York City. When I first moved to Buenos Aires, I was shocked to find out that Americans waiting outside certain busy bars and clubs on weekend nights got to use their nationality to jump the queues, and once inside, an American accent -- which is as sexy elsewhere as British and Australian accents are to us -- can get you even further than flattery, of which you're likely to be on the receiving end. It will pique people's curiosity and possibly even get you lucky.

It's not just a novelty thing among those who can only dream of America. I can't remember ever hearing a gay man outside the U.S. who spent time living or traveling there having anything negative to say about the country or the people in it, unless he was American. I still get a little electric jolt every time someone tells me how much he loves Americans. In a strange and occasionally exhilarating way, it makes me even prouder to be an American than I ever was when I was living there.