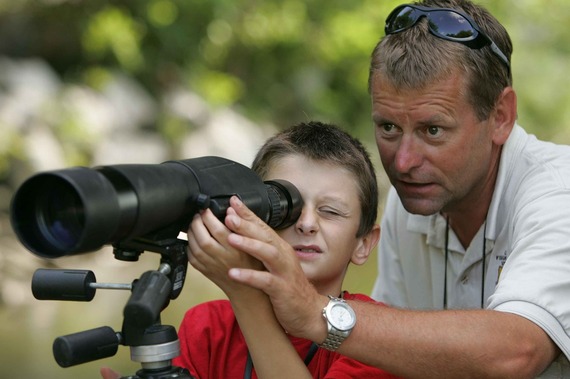 We spend 15-20 years in educational establishments learning the skills that are supposedly going to land us the jobs that will help us create the life we want.

The only problem is that formal education doesn't really teach us about mindset, dealing with people or about how to react in times of adversity, all of which are fundamental in achieving real and sustainable success. It was in these areas that my father had a huge impact on my development, and these are the five things that he taught me which have helped me advance my career and that I will look to pass on to my children.

My father came from a family of coal miners going back several generations, in fact, every living male relative of my father worked down the coal mines. But that wasn't a life my father wanted for himself or his children. My dad decided that education was going to be his escape route, so he worked hard and became the first member of his family to go grammar school and then he completed the equivalent of an electrical engineering degree. This allowed my father to get a good position at a telecoms company and break the cycle of coal mining.

My dad used to tell this story to me often to remind me that anything was possible and that we should set our goals based on where we want to be rather than where we are. He used to say "don't let your history determine your future." Following his advice and example, I was the first member of the family to go to University, and then went on to become a Top Leadership Expert, who'd written three books, even though there were no authors in our family.

My father was always a humble man, he treated everyone with respect, whether they were a janitor or managing director. He always used to say, "remember no matter how successful you become you still put your trousers on one leg at a time, same as everyone else. Never demand or expect special treatment. Never treat people badly just because you feel they're beneath you. Make everyone feel important because you never know who they know, or what they will become." It's amazing the impact that this has on people, especially yourself; it helps build trust and respect, and it also makes people more willing to help you in your goals.

3. Do the tough things when it matters most.

My dad was a big sports fan, and he was always most impressed by the players who got the job done when the going got tough. He said these were the people you could depend on. It's easy to shine when things are going well, but those who are truly the best do their best when the going is the toughest. That's what will make you stand out. It was this advice that made me volunteer for the tough projects, those that no one else wanted to do, and when we successfully delivered them it was this that helped me stand out and get promoted ahead of my colleagues.

4. Come in quietly, do a great job, leave loudly.

My dad would always say, "don't tell me what you can do, show me." In fact, he hated those people who would shout about how good they were and who would then come in and fail. He always said to me, "come in quietly, under promise, over deliver, then leave loudly as it always leaves a better impression." He always believed it was better to shout about what you'd done, rather than shouting about what you're going to do.

There's a fine line between arrogance and confidence and using this advice always helped me stay on the right side of that line. Arrogance can be a real turn-off, but when you're confident it helps build trust and confidence in others.

5. You sleep soundly with a clear conscience.

If there was one thing my father said more than any other, it was "it's never the wrong time to do the right thing." When it came to his values, it was this that was the one that most important to him. He always said, "it's easy to know what's the right thing to do just ask your conscience, and if you always do the right thing you will sleep a lot more soundly." In business there are many times that we have to make tough decisions, one's that can have a big impact on the lives of others.

These are never easy decisions to make, and nor should they be, but if you can be sure that you have done the right thing, not only will you be able to look yourself in the mirror, but also your colleagues. You cannot put a price on a clear conscience.

Following this advice has helped me achieve some amazing goals, things that others thought were impossible, it's allowed me to remain humble, earn trust and respect and also sleep soundly at night. This is exactly what I wish for my children and why I will be sharing the same advice.

What five things would you like to pass on to your children and why?