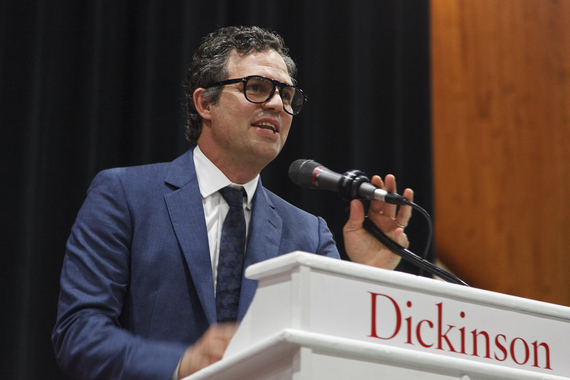 It's commencement season and politicians, authors, and titans of industry and innovation are descending upon campuses across the country to shake hands, accept awards, and impart wisdom on the eager ears of America's newest college graduates. This is a normal phenomenon. But, what if instead of the usual speaker, a superhero visited your campus? That's what happened at my college on May 17 when The Hulk--actor Mark Ruffalo--accepted the Sam Rose '58 and Julie Walters Prize at Dickinson College for Global Environmental Activism. So, what happens when The Hulk, befitting his green self, comes to commencement? Here's my top five:

Most commencement speeches are fairly predictable. Whether a former president or pioneering doctor, there is an expectation that their remarks will contain encouraging thoughts on leadership, service, and time honored advice. When Dickinson announced that Ruffalo would be receiving its100,000 prize for environmental activism--which he donated to Water Defense, an organization he co-founded-- the student response was a small explosion. Tweets, Facebook statuses and frantic emails from friends abroad flooded the Internet. The excitement was real and so were the questions.

Students wanted to know that Mark Ruffalo was a real climate crusader, not just a celebrity face for climate change. When we discovered that he was a climate-change champion, the the campus conversations shifted from 'What is Ruffalo going to say?' to 'How far can we take the climate-change fight?'

Graduates waited patiently for their chance to get up close to The Hulk for a question and a handshake. Some got more than a selfie with Mark Ruffalo, though. Over lunch, they engaged in meaningful discussions about their efforts to train local communities how to monitor their waterways for any effects of natural-gas fracking. They walked away with an acute sense of why celebrity is so important to activism. Celebrities make important activists, because their high profile lends them a voice that can reach ears far and wide.
It wouldn't be a graduation ceremony if Facebook, Twitter, Instagram, and Snapchat stories weren't flooded with pictures of diplomas, friends in cap and gown, and a few tears. But, when Ruffalo took the podium to deliver his remarks, the response was immediate. Every graduate, their younger sister, and cousin from Georgia had their phone out to capture the scene and show off how close they sat to The Hulk and how rad his glasses were. A picture is worth a thousand words, and Ruffalo's message will live indefinitely in all those Instagram photos.
Ruffalo hit a sweet spot in the generation inspired by change when he said, "Activist is not a dirty word." Activism and extremism no longer synonymous, students are excited to go out and make change; to be activists. When issues of race, identity and inequality are in the news 24/7, it's no wonder students broke out into a rowdy applause when Ruffalo spoke. "I'm asking each of you at some point or another to act up. Be misbehaved. Buck the system. Fight for what you believe in." Young people want change and they're ready to take chances and follow their passion to achieve justice.
The class of 2015 is ready to let their actions speak for them. Having finally crossed the finish line and collected their diplomas, they're realizing they've only just entered the fight. It's their time to follow their passions, build cool things, and stir up some trouble. Ruffalo encouraged the Dickinson class of 2015 to misbehave and build the world they want. If The Hulk can smash climate change, imagine what the 2 million graduates of the class of 2015 can bring down?