My daughters just left for their third year of sleep-away summer camp. They love camp just as I did as a kid. They gain value life skills and independence at overnight camps, as well as making forever friends.

Now as an experienced camp mom, I know the drill -- how to pack, what to pack, how to drop them and run -- and have tempered my expectations of them, as I know they won't write home.

But I wasn't always this way and sadly, still remember their first year as we prepped for camp....

We packed their bags together. We (OK, mostly I) carefully put shirts and shorts together in tight rolls as outfits.... enough for six days. We put clean underwear and socks in one tidy compartment, and packed four pairs of long pants to wear during horseback riding. I told them that they would most likely want to change into shorts or something after riding as they would be stinky, and that I packed some extra shirts too, just in case. Yet as I carefully explained what and why I was packing certain things, their sweet, elementary-aged faces remained blank. Perhaps they did not yet understand the benefits of changing clothes or the beauty of clothing choices.

I also bought them shower shoes for the communal showers at the camp and explained the bacteria they needed to avoid. I filled shampoo and soap bottles so they had enough for a shower a day... but yet, I still fretted that they wouldn't have enough soap. I reminded them to shower each day and brush their teeth. I packed the requested (1) beach towel and (1) bath towel and really tried to figure out how I could send them each for a few more towels... because how could two towels really be enough for a whole week?

Their bags were heavy as they each packed about six books each, and journals and pens and note cards for writing about their days and to write home. They both love to read and I think I imagined each of them using their few hours of free-time each day leaning against trees and getting lost in a book... just like at home. I was also sure I'd receive letters written in flowery prose from camp about their perfect and glorious days away at camp.

The bus ride up to camp was three hours long, so I assumed they would need a snack. I packed granola bars and crackers, a little candy snack and some fun little games to keep them occupied. I packed enough for maybe a 20-hour car ride for 40 people. Maybe.

I guess in my crazy mom head, I assumed they were going to fashion camp, where each camper would have a large closet where they could hang up their large wardrobe of clothes, feel the need to shower daily (just like at home) and have unlimited leisure time in which to curl up with a book. Maybe I also thought they would be alone. Especially on the bus. And the camp would not feed them. Ever.

I was 'That Mom' that packs embarrassing things in their kids' luggage and sends them too much mail.

Trust me for your children's sake -- you don't want to be "That Mom."

So for those parents who have never sent their kids away to camp, here are a few pointers for you to make their camp preparations a little bit easier. 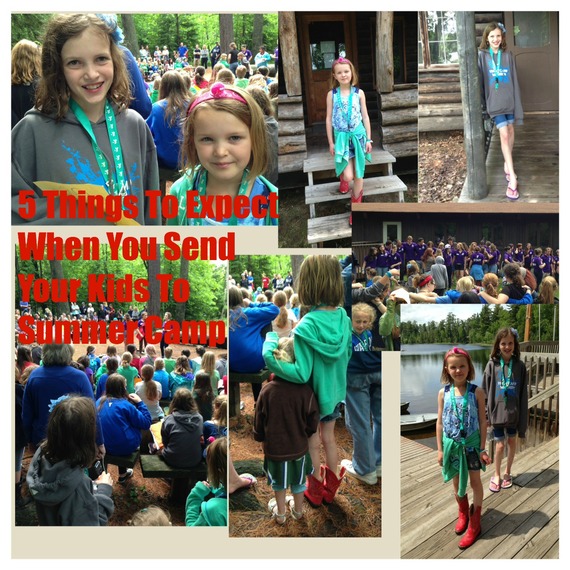 1. They will not shower.
Sure, they seem like clean beings at home. They shower daily, wash their faces and brush their teeth... but until their camp counselors actually physically force them into the shower, they will not shower. So don't waste your time packing all the fancy toiletries and soap and stuff. Just assume a few good swims in the lake will suffice.

2. They will not change clothes. Ever.
Like you know that outfit they are wearing when you drop them off? That's what they will be wearing when you pick them up. Yes, even those kids who like to change their clothing 85 times when you are at home. They will also wear the same outfit for seven days straight.

3. They will not use the plastic laundry bag that you included in their suitcase for their dirty clothing and wet suits and towels.
They will throw that wet towel right into their suitcase onto ALL of their clean clothing and it will stink to high heaven. In fact, it will stink so much that halfway home, you have to stop and tie the suitcase onto your car's roof because you swear something died in there.

5. Chances are that your kids won't miss you.
Oh sure, they still love you and want to live with you and eat the food you make when they return and don't want to leave you forever.... yet. But Summer camp provides so much to do -- new experiences, new friends, new fun -- that they don't have time to miss you. So don't be sad if your 10-year-old, instead of running up to you and giving you a big hug when she first sees you at pick-up, just throws her sweatshirt at you and says "hold this" while she continues to go off and hang out with her new friends. She'll eventually come around and give her baby sister a hug... right before she tells you that she needs to come to camp for much, much longer next summer.

So this summer, when I packed their bags again for camp -- this time for 2-3 weeks -- I just threw together a small backpack with two changes of clothing, some underwear and a toothbrush... along with my mother's heart during this letting go process that just gets bigger and bigger each year as I watch my kids grow up and gain experiences that I am no longer a part of.

And soon, they will just pack their own bags. But I know I'll go ahead and slip in a few extra pairs of underwear and a clean toothbrush because I'm a mom, and that's just what we do.