My father always had a lot of respect for King Kamehameha I.

When we were young he would take us every June to watch the Kamehameha Day parade. And after, we would eat Hawaiian food for lunch. Before the parade started, we usually stopped off in Chinatown to buy a fresh plumeria lei to place at the foot of King Kamehameha's statue. My youngest brother was given the middle name Kamehameha with the consent of a Father David "Daddy" Bray, a Hawaiian kahuna directly descended from the great chief.

When I was a reporter during the Vietnam War, we liked to write things on our helmets. Draftees would infuriate some of their more strict officers by drawing peace symbols on the helmets we called "steel pots."

"Forward my young brothers [and sisters] and drink of the bitter waters of battle for there is no turning back until we are victorious."

I liked the word Imua for its brave ring, a feeling of control in the face of Vietnam firefights, which could suddenly turn into frenzied entanglements of chaos and fear.

This week, we honor Kamehameha I with parades, and songs, and by buying Hawaiian plate lunches to eat in the summer sun at the beach. My friend Janice Marsters says we all know Kamehameha's statue and most of us have a vague idea about how he united the Hawaiian Islands into a kingdom and why he wrote the Law of the Splintered Paddle, but for many Kamehameha Day is just another state holiday in Hawaii.

Here are five things that may make it more interesting to think about the man born on a stormy night in Kohala who became Hawaii's greatest alii.

1) Like a character from a Greek heroic poem, Kamehameha had the equivalent of a price on his head from the day he was born.

Alapainui, the ruling chief of Hawaii island, ordered the child who was about to be born to Kekuiapoiwa , Kamehameha's mother (Alapainui's niece), to be executed at birth. This was after a priest warned Alapainui the child would grow up to be a mighty warrior who one day would overthrow him.

Kamehameha's mother had her infant son wrapped in a kapa shroud and carried by a runner to a place called Awini in the mountains of Kohala where Kamehameha would be hidden away for five years under the protection of a woman relative named Kahaopulani. For some reason, perhaps guilt, Alapainui eventually welcomed the young boy Kamehameha to live in his household where Kamehameha began his training in the chiefly skills of leadership and fighting.

2) Kamehameha grew to be more than seven feet tall.

His height is estimated by taking into account the length of his war spears and his feather cape, which measured more than seven feet in length. Hawaiian chiefs did not allow their feather capes to touch the ground. Kamehameha was also extremely strong. He is reputed to have picked up and moved a rectangular rock known as the Naha Stone that weighed more than a ton. The legend was any man who lifted the Naha stone would eventually conquer all the Hawaiian Islands.

Kamehameha had been told not to lift the Naha Stone because he lacked the high-ranking Naha blood; he was of the lower niaupio bloodline. But Kamehameha, who never let anyone put him down, was undaunted and proceeded to successfully move the stone.

The Reverend Stephen Desha wrote, "All who stood by were amazed and dumb with awe."

The Naha Stone today rests in front of the Hawaii County Library on Waianuenue Avenue in Hilo.

3) Kamehameha was a brilliant strategist.

He formed a special group of warriors that were similar to shock troops today such as the U.S. Marines. They were fast-running spear throwers known as the Kipuupuu warriors.

Kipuupuu is the name for the pelting rain, which sweeps through Waimea on Hawaii Island. Author Desha called Waimea "...this mountainous land full of fearless men" -- the kind of men Kamehameha wanted with him.

The Kipuupuu were trained to rush in first with their spears, surprising enemy encampments, leaving them momentarily confused, after which Kamehameha bore down with his regular troops and killed the startled enemy. Many of the Kipuupuu warriors died in the first moments of a battle.

One of the most beautiful songs sung by the Brothers Cazimero is "Waika," about Kamehameha's Kipuupuu warriors as they stripped wood for their spears in the forest known as Waika. The song speaks of the soldiers' reveries as they work in the cold and the mist surrounding the verdant plants.

As they prepare for war, the elite soldiers are deep in thought about the beauty of the forest and loved ones they will probably never see again. It is a universal lament that could be understood by today's army troops in Afghanistan, a pre-battle song about soldiers yearning for life as they face the certainty of death.

When foreigners began to arrive in the Hawaiian Islands, he used them mercilessly to learn skills to make himself a more powerful thinker and military commander. Kamehameha adopted the Englishmen Isaac Davis and John Young to teach him how to use cannons and guns during battles. In return, he gave Davis and Young each a chiefly Hawaiian wife and acres of valuable land.

Historian Samuel Kamakau wrote, "It was through the aid of muskets and of foreigners to instruct in their use that Kamehameha was able in so short a time to bring all the islands under his rule." The historian Ralph Kuykendall said that even though Kamehameha had foreigners helping him "they were always his servants, never his masters; his was the better mind and the stronger will."

Kamehameha at times also favored the innovation of western attire. When the Russian exploring ship Rurick arrived in Kailua-Kona in 1816, Louis Choris, the official artist on board, painted a portrait of Kamehameha. When Kamehameha arrived for the painting session, he surprised Choris by showing up in the attire of a sailor, blue trousers, a clean white shirt and a necktie of yellow silk.

Choris said, "I begged him to change his dress; he refused and insisted on being painted as he was," wrote Choris. His resulting work, "Kamehameha in Red Vest" is one of the most famous paintings of the king.

5) Kamehameha was an entrepreneur, quick to grasp business opportunities.

Kamakau writes that Kamehameha and his people first tasted rum in Kailua-Kona in 1791 that had been brought in by a Captain Maxwell.

"Kamehameha went out to the ship with Young and Davis when it was sighted off of Keahole Point and there they all drank rum," writes Kamakau. He said Kamehameha set up a still at Kahapaakai "and from this beginning rum-making spread over the group from Oahu to Hawaii."

Interestingly, Kamehameha did not become much of a rum drinker himself. People who knew him said the king was disciplined in his eating and drinking habits. Captain Vasilii Golovnin, commander of the Russian ship Kamchatka, wrote in 1818, "Tameama [Kamehameha] ...is alert, strong, active, temperate and sober, never takes strong drink, and eats very moderately ... his honesty and love of justice are demonstrated by his behavior."

Kamehameha died in Kailua-Kona on May 8, 1819. There is no grave to visit today to mourn him because, before he took his last breath, he instructed his friend Hoapili to hide his bones in a place they would never be found. That was the custom then. The bones of alii were believed to contain mana. By hiding them, a chief's enemies could not steal the bones to enhance their own power.

No Hawaiian king after Kamehameha was ever able to have such far-reaching power. 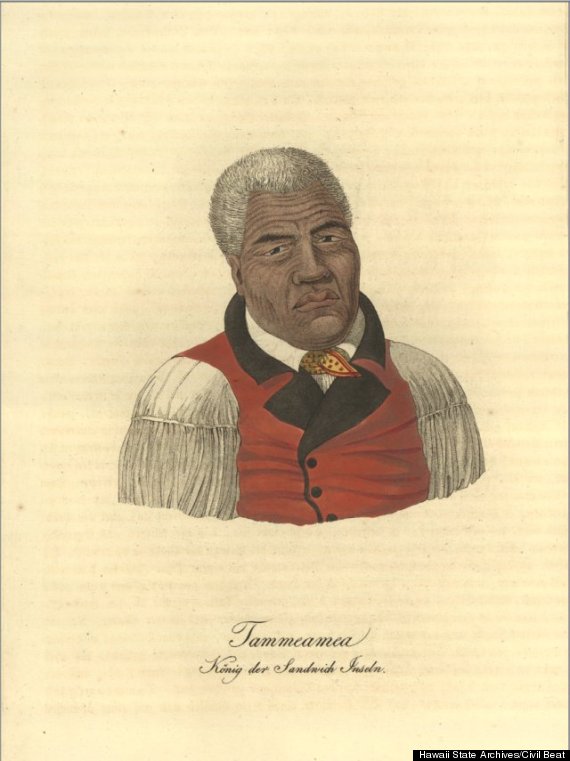