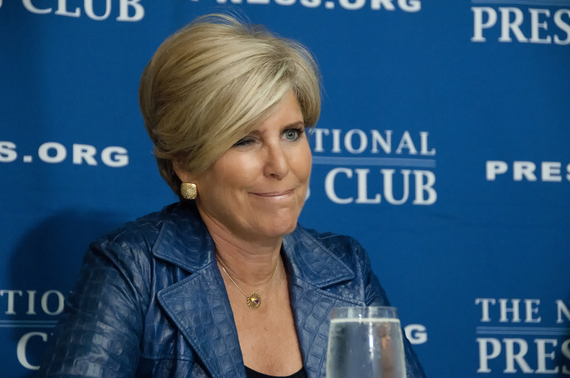 In the personal finance world, there aren't many names more divisive than Suze Orman. In fact, even Orman doesn't always seem to agree with herself, often giving her audience one piece of financial advice and then later suggesting the opposite course of action. "Orman is nothing if not a contradictory personality," as The New York Times put it in a feature on Orman.

Orman has justified her evolving advice in the past by saying, "Financial advice needs to change according to what is happening in the economy," according to CNBC. But sometimes it's not only Orman's advice that can be contradictory but also her actions. From launching a financial product she had previously railed against to endorsing products she'd often criticized as bad deals, here's a look at five times Orman didn't follow her own advice.

Read: Denied By Suze Orman? 4 Things You Can Actually Afford

1. She Recommended Her Approved Prepaid Card

Orman often tells her audience to avoid fees on financial products, advising listeners to cancel credit cards with annual fees, shop around for a bank with low fees and avoid high-cost prepaid cards.

But in 2012, Orman launched her own prepaid card, the Approved card. She said that consumers who used the card as she prescribed would only ever pay $3 a month and she touted a partnership with TransUnion that she said would give cardholders unlimited access to their TransUnion credit scores and credit reports.

After the launch, however, the card was found to charge numerous fees, according to NerdWallet, from $2 to contact the customer help line -- the first call every month was free -- and $4.95 to make over-the-counter deposits to the highest fee on the account, a whopping $30 bill payment fee. The partnership with TransUnion also fizzled and nothing came of it despite Orman's hopes that the bureau would one day factor the card usage data into credit score calculations. In June 2014, Approved cardholders received letters notifying them that their Approved cards would soon be shut down, and Orman's prepaid card was officially dead.

2. She Taught at a For-Profit University

Orman has often preached the evils of student debt. "Student loans can be the most dangerous loans anybody ever takes out because, in most cases, they are not dischargeable in bankruptcy," she said in a "Money Tips" segment on her website. She advised students to do careful math to figure out what monthly payments would be and decide whether they could afford them once they left college.

Orman's aversion to student loans didn't prevent her from partnering with University of Phoenix to create a credited personal finance course, however. Orman made this move despite statistics that show University of Phoenix and other for-profit schools account for 47 percent of student loan defaults, even though only 13 percent of college students attend such institutions, according to Huffington Post.

Students at for-profit schools are for more likely to end up with student loan debt they can't afford, yet Orman still chose to join the school's faculty and even praised University of Phoenix in a 2011 USA Today article for requiring all of its students to "go through a free and mandatory three-week orientation course to make sure they understand the full costs of college before they sign on the dotted line."

3. She Sold Her Gold

In 2011, Orman was preaching the virtues of gold. Demand for this precious metal was surging, and it was quickly racing up in value. That year, gold reached a peak value of around $1,900 per troy ounce, an incredible rate of increase from about $1,350 in January 2011.

In August 2011, shortly before the price of gold peaked, Orman announced via Twitter that she had sold her gold. "I sold my gold today only because I had a tremendous gain and had way too much money in gold," Orman tweeted.

Orman continued endorsing gold as a smart investment even though she'd just sold hers at a price that would turn out to be just under an all-time high. In September 2011, she tweeted, "Gold should make up at least 10-20 percent of your portfolio," and predicted on Twitter that gold would reach $2,100 an ounce by November 2012, though she included the caveat "time will tell." It never reached $1,800 in 2012.

Related: What Suze Orman and 9 Other Powerful Women Carry In Their Wallets

4. She Endorsed a New Car

It's no secret that buying a used car instead of a new car can mean several thousands of dollars in savings, and this was the reasoning behind Orman's frequent suggestions to her audience to buy used. In a 2010 article for O, The Oprah Magazine, she wrote, "Since the most significant drop in a car's value occurs in the first two or three years, buying one that's just a few years old means you avoid paying for those early years of big depreciation."

Then in 2012, Orman landed an endorsement deal for Acura's "Season of Reason" marketing campaign, giving advice to "spend smart." Acura and Orman were sending the message that smart spending apparently included spending $40,000 for a new Acura TL, reported Forbes, even though that contradicted Orman's earlier advice.

Over the years, Orman's advice on mortgages has changed. In the early 2000s, Orman told people to aggressively pay down their mortgages and even went as far as to say homes offered a "known return." But this came with a big risk, wrote MarketWatch columnist Chuck Jaffe in 2003: Paying down a mortgage "to the exclusion of other investments is all-eggs-in-one-basket investing. It's a dangerous strategy being pitched as the ultimate safe one." Jaffe was unfortunately proved right when the 2008 housing market collapse leveled home values and wiped out equity and investments many homeowners had poured into their homes.

After the collapse, Orman changed tacks on mortgages. In 2011, she recommended a strategic mortgage default as a smart option for homeowners with underwater mortgages. Then, in a 2013 episode of "The Suze Orman Show," Orman told her audience that it was all right to buy a home with only a 10 percent down payment, reported CNBC.

For her own real estate portfolio, however, Orman pays cash. She told The Wall Street Journal in 2014, "If I can't write a check for it, I can't afford it." Of course, with Orman's net worth estimated to be about $35 million, what the personal finance expert can afford is very different than what the average American can afford.