For those of you who don't have children and are spending wild nights out on the town, parenting may not seem very exciting or glamorous, but, it isn't. Although parenting has its rewards. I've heard. At least that's what all the parenting books say. Not that I've read any parenting books, but my wife put a big stack on my nightstand and I saw that quote on a back cover: 'Parenting has its rewards.' I skipped ahead to the ending and spoiler alert: The 'rewards' are not financial.

Apparently, one of those non-financial parenting rewards is the satisfaction in hearing your child's second grade class sing monotone Christmas carols while signing the words in American Sign Language. The only good school play I've ever attended was when three ten-year-old girls left the stage, forgot their portable microphones were still live, and proceeded to criticize all the boys in the class. My favorite line: 'Would you rather kiss a boy or jump in a toilet?'

Whether it's a play, a dance recital, or a school Christmas pageant, reality television has conditioned us to demand the option of voting less talented children off any show. The lack of a 'Vote No' texting option can leave parents feeling frustrated and powerless, and unless your child's school has an open bar, I would suggest the following five survival strategies:

1. Take notes.
I like to dwell on the positives in life, which is why I can never remember details of my children's performances. Taking notes can help. Taking notes is a common technique to help pay better attention during a class or meeting, but it can also be useful during a play or pageant. Here are my notes from last year's Christmas pageant:
Oldest kid--boy; song and dance number; 3 out of 10
Youngest kid--also boy, but double check with his mother and insist on haircut; class recitation of poem; 2 out of 10
Tyler's mom--9 out of 10
Caleb's mom--8.5 out of 10
To do: get my kids on Tyler and Caleb's soccer team

2. Just start clapping.
Children are easily confused, so if they hear applause they'll think that's the cue to take a bow and exit. So each time a new class walks on stage and the music starts, count to ten and then start clapping like it's going out of style. Other parents will join in, because adults are easily confused, and eventually the children will shrug and shuffle off the stage. With any luck you can cut that three-hour pageant down to fifteen minutes. 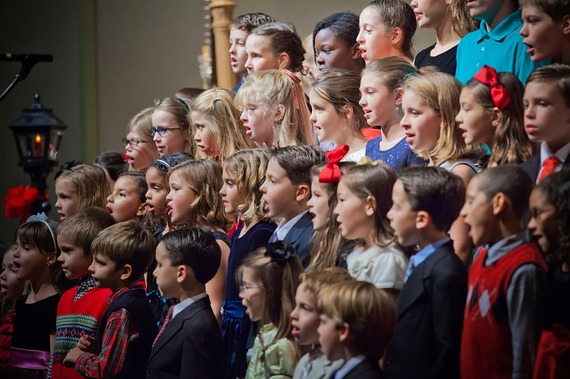 3. Don't be afraid to laugh, even if it's not a comedy.
Laughing stimulates the brain and will help keep you awake in that dark, stuffy gymnasium. You may get some dirty looks if the play isn't a comedy, but in my defense, why was an all-boys school performing Steel Magnolias anyway?

4. Bring an exercise ball to sit on.
This will keep you alert and awake while also strengthening your core. It can also be used as a beach ball to be tossed around by the audience to keep them alert and awake while also strengthening their cores. Also, experts say any time you're in a school gymnasium your risk of a dodge ball game increases exponentially. If a game of dodge ball does break out, that exercise ball could probably take out an entire row of carolers.

5. Boo early and often.
Sit in the second to last row and start booing the second the lights go down. When the audience turns around to look, you should also turn and look right at the principal sitting behind you. If he punches you, nobody would blame you for leaving early.

Paul Johnson stand-up comedy: My Dad Can Beat Up Your Dad