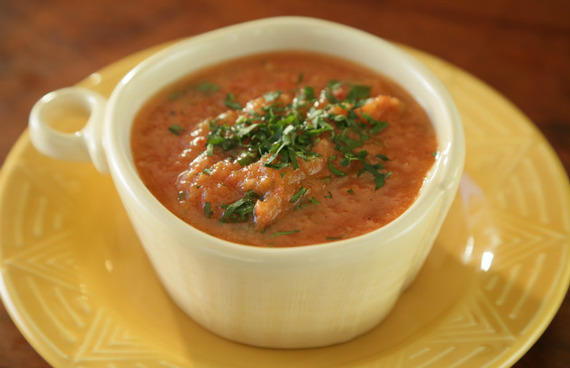 For years, I've relied on a simple remedy from the garden to beat the heat--a sort of a cross between a cold soup and salad. The Spanish call it gazpacho. I call it the most refreshing soup on Planet Barbecue.

Planet Barbecue? Yes, because when you sip gazpacho at my house, it makes a stop between the farm stand and the blender. Sometimes I grill the veggies--tomatoes, peppers, onion, garlic, cucumbers, etc.--over a screaming hot wood fire. The idea is to char the surface to impart a smoke flavor, while leaving the vegetables essentially raw in the center.

Alternatively, I blast the veggies with wood smoke in a cold smoker, offset barrel smoker, or even with a handheld smoker--just long enough to add a whisper of smoke, but not so long you cook them.

I often call smoke the "umami" of barbecue. It adds an unexpected dimension of flavor--without overpowering the pristine freshness of garden vegetables.

Here are 5 techniques to help you take grilled or smoked gazpacho over the top.

For 5 more tips and recipes for Grilled Gazpacho and Smoked Gazpacho, visit BarbecueBible.com.