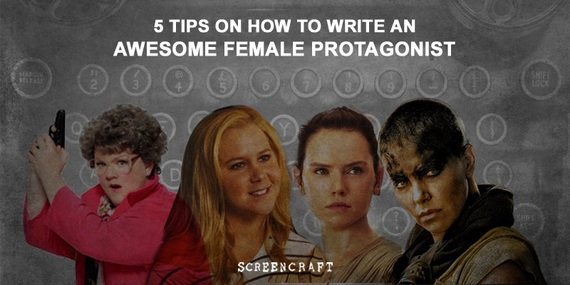 Brianne Hogan is a freelance writer and screenwriter (and sometimes actor) based in Toronto. She has a degree in Dramatic Literature and Film Studies from NYU, but has probably learned more about the art of screenwriting from watching Netflix all day. Her byline's appeared in Creative Screenwriting, Elle Canada, HelloGiggles, among others. You can follow her on Twitter @briannehogan.

With the mega success of recent films like Mad Max: Fury Road, Star Wars: The Force Awakens, and Trainwreck one would assume that Hollywood has the kickass female protagonist down to a science. Unforgettable female heroes who were each assertive, nuanced and captivating in her own way powered each of those movies, ultimately resulting in box office gold.

But you know what they say when you "assume" things.

The truth is, Hollywood has a tendency to treat female protagonists as second-class citizens. The majority of female characters are still mothers, girlfriends, wives. or the "means well" secretary/assistant to the male hero. Their value is determined by who they are bedding, who they want to bed, or who they gave birth to. They rarely have dreams or desires of their own -- well, except when they are desiring a male's attention, of course -- and they seldom have a journey of their own. Except when it comes to "getting the guy."

This is not an opinion, by the way. It's a fact. According to a 2015 study by Dr. Martha Lauzen at the Center for the Study of Women in Television and Film at San Diego State University, only 12% of film protagonists were female in 2014. More depressing is that only 29% of major characters and 30% of speaking characters in the top 100 films were women or girls.

These are some wonky statistics considering that women buy half of the movie tickets sold each year and because, well, we comprise 50% of the global population.

As writers, we have the opportunity to change these statistics and create stories starring interesting, complex and relatable female characters that the audience will passionately root for -- one need only look at Rey from Star Wars VII: The Force Awakens to know how true this can be.

Here are five tips to assist your writing of the next great female protagonist.

1. She is More Than "Broken And Beautiful"

A script reader friend of mine recently lamented the number of screenplays she reads that describe female characters as "broken and beautiful." What does this mean? I have no idea. It's a pretty vague way to describe someone. But if I were to venture a guess, I would say the "broken" part hints at some kind of inner conflict and vulnerability. Cool. But let's go further than that because "broken and beautiful" sounds like an attractive, semi-interesting object much like my grandmother's watch. Flawed characters are fascinating because they're real and relatable. Ask yourself: where does this woman get her power? How does she define herself? How do those around her define her? What are her habits? What mistakes does she consistently make? A truly fleshed out character is not "broken" for the sake of sounding "interesting." She's interesting because she is flawed. She's compelling because she overcomes challenges -- both internal and external -- and learns from them. Most importantly, she is the catalyst for her story, and not a passive observer. And she doesn't necessarily have to be beautiful, either.

Tina Fey, Amy Poehler, Amy Schumer, Kristen Wiig, Melissa McCarthy and Mindy Kaling are some of the smartest and funniest comedians out there right now, and they all have one major thing in common: they're women. Most comedies cast the female part as the "straight man" -- the voice of reason and logic -- to the man's outlandish, emotional behavior. In other words, she is the big party pooper. This is not only an unbelievably boring role, but as the above wickedly talented comedians prove, it also need not be the case. When writing your comedy feature or pilot, make a conscious decision to make your female characters witty, outlandish, quirky, crude and/or larger than life. Dip deeper than the female tropes we're used to seeing and you will be pleasantly surprised.

Some of the most kickass female protagonists in recent film memory were originally written as male characters. Angelina Jolie in Salt was initially intended as an action vehicle for Tom Cruise. George Clooney developed Sandra Bullock's role in Our Brand Is Crisis for himself until she suggested she take it instead. And let's not forget Sigourney Weaver's Ripley from the Alien franchise. Ridley Scott's decision to change Ripley's gender ushered in a unique action heroine amidst a slew of muscle-bound male counterparts. A female character does not have to embody masculine traits to be compelling or successful, but switching genders can help break stereotypes and give a refreshing take on a familiar role.

4. When In doubt, refer to the Bechdel Test

By no means is this "the end all and be all," however the test is useful in determining whether you story supports two active female characters who aren't solely wrapped up in a guy and/or his journey. A film passes the Bechdel Test if it has:

The tool is a great reminder that females, even in a love story, can discuss other matters that don't include a man or romance.

Game of Thrones author George R. Martin once said that he "always considered women to be people," which explains why his female characters are so rich and fascinating to watch. Although it seems like a fairly obvious thing -- to write a female character as human since, you know, women are people -- as most movies and TV shows attest, it's apparently not. When writing a female character, a few things to keep in mind about her include: is she essential to the plot, or does she simply serve as a device for the male hero's story? What are her character quirks? What are her flaws? What are her skills? What does she desire? What motivates her? What scares her? The answers you receives are the things that, essentially, make her human.

When asked why he writes strong female characters, Joss Whedon said, "Because you're still asking me that question." Let's make 2016 and beyond the year we stop needing to ask that question.