By Leah Still for ShermansTravel 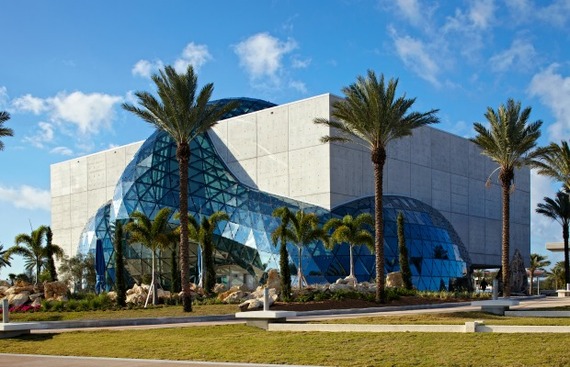 Before the rest of the world catches on, discover these five American cities that are gaining traction in the areas of fine arts, fine food, and fine beverages.

With a celebrated museum devoted to Salvador Dalí and a revamped downtown that's home to multiple craft breweries, the former retiree community of St Petersburg is boasting a younger energy that's giving the Florida city a totally new vibe. The focal point is Central Avenue; take yourself on a brewery tour by wandering down this street and its side avenues until you hit the Tampa Bay waterfront. Check out Green Bench Brewing Company, Cycle Brewery, and St Petersburg Brewing Company, and then walk a few blocks south to the Dalí Museum. Admire the exterior "enigma," a bubble protruding from the building made up of 1,062 triangular pieces of glass, and then head inside to see the museum's 96 oil paintings and other works.

Food and sports are the main events in this Kansas-Missouri border city that's enjoying a moment in the sun thanks to passionate fans who cheered on their beloved underdog Royals all the way to the World Series and the Sporting KC soccer team to a national championship in 2013. Long famous for its barbecue, Kansas City is experiencing an increase in hip bars and independent eateries that focus on seasonal fare. Visit Room 39 for meat and cheese from local farms, FüD for an organic vegan twist on classic American dishes, and Julep, a popular cocktail bar where whiskey is the liquor of choice.

In most American ski towns, après ski typically means drinking a few beers in a rustic, cabin-style bar while you rub your tired feet. But SLC is no ski town -- it's a classy yet outdoorsy city just 45 minutes from some of the country's top resorts, and by showing your lift ticket and mentioning "après ski" to the Utah Symphony box office, you'll get the best seats in the house at a discounted price. The city's sophistication continues at acclaimed restaurants like Pago, where every item on the menu is locally sourced, and Forage, known for its 14-course tasting menu.

A small Southern city once known only for being Walmart's headquarters, Bentonville, AR., is going through a cultural revitalization led by 3-year-old Crystal Bridges Museum of American Art. It's easy to spend a whole day here: marvel at the distinctive architecture that positions the museum across a natural spring, browse the impressive collection of works by artists like Andy Warhol and Edward Hopper, and explore the 3.5 miles of nature trails that wind through 120 acres of prime Ozarks forest. Then head to Bentonville's cute downtown to the 21c Museum Hotel, a stylish combo of boutique hotel, art museum, and inventive Southern cuisine at trendy restaurant The Hive.

Pushing yourself to the limit in Central Oregon's great outdoors and then rewarding yourself with the area's incredible variety of locally made craft beer, cider, and spirits is how things are done in the friendly mountain town of Bend. Spend your morning snowshoeing, skiing, kayaking, rafting, horseback riding, fly fishing, paddleboarding, rock climbing (you get the picture...), and then head downtown for some well-earned libations. To get the full microbrew experience, follow the Bend Ale Trail, a self-guided tour of 14 breweries.

Changes to Cuba-U.S. Relations: 5 Tour Operators React
5 Things That Might Surprise You About All-Inclusive Resorts
6 Affordable Ways to See London