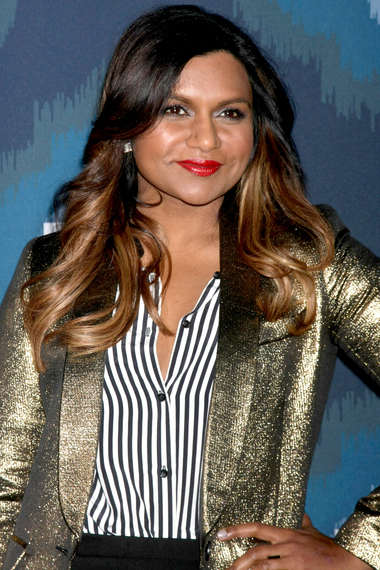 Gilda, Kristen, Amy, Tina. These are the names I gave during an exercise many years ago when a psychologist asked me to list women--famous or not--I would choose as mentors if hypothetically possible. I was referring of course to Radner, Wiig, Poehler, and Fey, and I chose them because to me, they were fearless.

This is probably counterintuitive if you know anything about actors or creative types because, as a group, we tend to be quite familiar with fear. Even the most skilled performers often cite that they're riddled with nerves before going on stage--but that doesn't stop them from doing it.

What that psychological exercise was getting at was that by focusing on people you admire, you uncover parts of yourself waiting to be strengthened. At first, it surprised me that I listed slapstick comediennes, but as time went on I knew it was because these women put themselves out there without fear of being judged--and that's how I wanted to live. Each year that passes I believe more and more that it's what life's all about. Not playing small. Having the courage to contribute your voice.

Because unfortunately, there is no return on investment for your fear. You get nothing back from the countless hours you spend alone with it, save for a few gray hairs. Of all the terrifying things this world has to offer, sometimes the scariest things can live within us: our negative self-talk, our beliefs about being accepted or loved or good enough. I don't know how to stop worrying. But harnessing the confidence of these women has truly helped me become more fearless, both in my creative work and in my everyday life.

Knowing that you're being true to yourself--whether you look dumb doing it or not--is the most liberating sensation there is. Recognizing you can feel the fear and pursue your passions anyway, or speak your mind even if your voice trembles, is incredibly empowering.

So take it from the first ladies of comedy and the lessons they've given us: pretend, for one moment, that you are not afraid. Show up. Get on that stage (whether the "stage" represents your first day on the job, an actual audition, or just facing another day as your authentic self). Be willing to make a fool out of yourself. Be willing to laugh at yourself. Be brave, and try again tomorrow.

1. "No one looks stupid when they're having fun." - Amy Poehler
Everyone has a moment or two from adolescence when they distinctly remember their freak flag not being well-received and decidedly shutting it down. Although I had many before my 7th grade summer camp experience, that week was pretty much the holy grail of embarrassment. Let's just say I didn't know how to use eyeliner or sing all the words to Dashboard Confessional at the time, so I was pretty much persona non grata. I was an enthusiastic theatre nerd swimming in a sea of kids who were trying to look like they didn't give a shit; it wasn't a good combo.

At the end-of-summer dance, I remember having a great time--by myself. Let's just say I got down with Mariah Carey a bit more than punk rock. I proceeded to lip synch an entire MC song, dancing enthusiastically and doing that thing where she puts one finger up in the air, waves it around wildly while closing her eyes, and puts her other hand on her ear. I was being me, performing, acting like an idiot, but having a great time. Until...I noticed people pointing and whispering. At that moment I told myself not to have fun like that, because it wasn't cool. But as I got older, I realized that people who constantly try to fit in and appear nonchalant aren't having any fun, and Ms. Poehler backed that up for me. Would you rather be looking over your shoulder, wondering if you're being liked, or having fun and enjoying yourself? Life is too short not to sing Mariah, thanks.

2. "There is no real security except for whatever you build inside of yourself." - Gilda Radner

Throughout my early '20s I clung to the notion that other people could make me happy, and it was a calamitous way to live. It made me clingy, dependent, and miserable. If you're dependent on external forces to make you feel secure, you'll never be happy. Instead, Gilda's words remind me that we have to feel secure in ourselves in order to feel secure in the world. So no matter what's going on around you, try and build something good within yourself. Spend time cultivating self-confidence. Take responsibility for your own happiness.

It can be easy to fall victim to "imposter syndrome" or feeling like we're not worthy of promotions, love, or even having a voice and expressing ourselves. I've certainly experienced it with creative projects, questioning whether or not things are good enough to put into the world. That sinking feeling that you don't deserve to give yourself a chance is at best distracting and at worst, paralyzing. What would happen if every powerful woman questioned whether or not she was worthy or capable of the task at hand? You can't doubt yourself like that, or you'll never get anything done. Work your ass off and know there's enough room for all of us to contribute something positive to the world. The world needs what you bring to the table, and there can never be enough people who are happily doing what they love.

4. "Don't waste energy trying to change opinions. Do your thing, and don't care if they like it" - Tina Fey
If only I would have learned this in my early twenties, they would have been a lot freer and more fun. If someone doesn't want to be with your or want you on their team in whatever way that may be, it's a waste of your time to try and change their mind. You don't need to convince anyone you're worthy of their attention. Instead, focus that energy on your own talents and passions. DO YOU. Strengthen your backbone and don't look back. Remember that people do what they do for their own reasons, and no one's opinion of you dictates your self-worth.

5. "You have to do what you really, really want to do--even if it scares the shit out of you." - Kristen Wiig
Kristen is so wonderfully unique and free and her advice is something I've tried to internalize over the last year: do what you love and worry about it later. The world needs more people who are happily pursuing their passions and sharing their light with others. I don't want to think of a world where Kristen Wiig was too scared to give us the Target Lady, or a world where Amy Poehler thought she was looking stupid so she stopped making us laugh.

When you're passionate about something and work hard, not only will amazing things happen, but you'll make the world a happier place. So whatever you've been putting off: a solo vacation, telling someone how you feel, or pursuing your artistic dreams, life is too short not to go for it. There will always be a hundred reasons to worry on any given day, but you can't let that fear prevent you from going after what you want. So what if it doesn't turn out exactly the way you thought it should? Do things because you want to. Do things because they're fun. Do them because you're fearless.