Like many feminists, I have always regarded the institution of marriage with some skepticism. While at one point in my life I thought I would never get married, I changed my mind when I met my husband, Chuck. Being with him made me feel like I wanted to experience everything life had to offer -- including marriage and whatever that entailed. I wanted to celebrate our love and our life together with the people we care about the most and honor our commitment to each other.

But marriage will always be a tradition borne out of the patriarchy. So there I was on our wedding day, a feminist dressed in ivory, clutching my father's arm while he walked me down the aisle. Making a wedding "feminist" is a tough task -- nearly impossible, and I found myself having to make concessions along the way. For example, while I originally wanted to walk down the aisle alone, in a nod to my independence, giving my dad his moment and avoiding hurting his feelings was much more important to me.

Luckily, I still found some ways to incorporate feminist values into my wedding that made me feel comfortable. This is not meant to define for anyone else what a feminist wedding is, and I do not claim that the way I did things is the "correct" way to have a feminist wedding. In fact, fundamentally I think what ultimately makes a wedding feminist is when the bride and her partner have the freedom to create the type of wedding celebration that feels right for them.

1. We picked a progressive officiant
We had a woman Justice of the Peace conduct our ceremony who was on board with the type of wedding we wanted to have and was willing to work with us to create a ceremony that reflected our philosophies. I met with her before the wedding and told her how important feminism is to me and gave her some suggestions of language I wanted her to incorporate in her remarks, like a reading from bell Hooks' book, All About Love. She also let me veto several of the traditional customs in wedding ceremonies -- like when the officiant thanks the father of the bride for "giving" her away -- a notion that implies the woman is a piece of property being transferred from one man to the next. Our officiant understood what we wanted and didn't want and became our partner in creating a customized ceremony.

2. We incorporated feminist readings into the ceremony
My husband I are not religious at all, so biblical readings were not an option for us. However, we both love literature, so I began looking at some feminist writers for inspiration. I ultimately settled on a poem by Maya Angelou and an excerpt from the Supreme Court decision that legalized gay marriage. Both readings emphasized values I believe are crucial to a successful marriage -- equality, fairness, and respect.

3. We wrote our own vows
Writing our own promises to each other was important to us. Being able to stand up in front of our families and friends and read the vows we wrote for each other felt empowering. I felt a sense of agency that I think would have been lost had we used more traditional, generic vows. They were words that came from our own hearts and were written exclusively for us.

4. I vetoed the veil
When I first got engaged, I imagined I would wear a non-white, colorful dress -- maybe even black! The idea of wearing virginal white bothered me. But finding a non-white dress was a lot harder than I thought, as they are still rare. I ultimately decided on an ivory dress, which felt like a compromise. But throughout the process, I knew I did not want a veil, even though my friends kept insisting I try one. The lifting of the veil is another symbol of property transfer -- once the groom removes it, he takes "possession" of his bride. I felt good in my ivory gown and veil-less head, and I'm glad that I didn't let anyone pressure me into wearing one.

5. I kept my last name
I've built a pretty solid career in my 30 years of life, and I also have a PhD, so my title of "Dr." will always trump "Mrs." My last name represents me and where I come from, and I didn't want to change it. And what I really didn't want was to be introduced, for the first time, as Mr. and Mrs. Charles Fritch, as though marriage erases my entire identity and subsumes it under my husband's. So I had the DJ just announce as the newlyweds, Brittany and Chuck, and have proudly kept my last name in tact (no hyphen). While I respect and support the women in my life who have taken their husband's last name, keeping that tradition was not in line with my personal beliefs. We have decided that when we have kids, their names will be hyphenated to include both of our last names, a move that feels right for us.

Infusing our wedding with feminist values made the day even more special, because doing so reflected who we are as people and what we aspire to. Ultimately, however, what makes a marriage feminist is not your wedding itself, but a relationship built on equality that you create together every day. 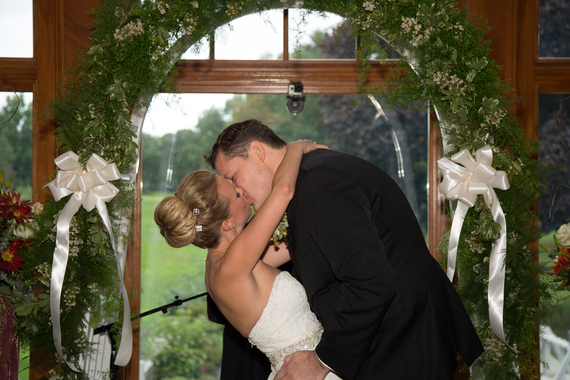 US Presidential Election 2020
Breaking news, analysis and the latest polls on the presidential race from HuffPost’s politics team
See More
Voting Made Easy
Register to vote and apply for an absentee ballot today
Register now
More:
weddingswedding planningWedding DressesFeminism
Newsletter Sign Up
A weekly guide to improving all of the relationships in your life
Subscribe to HuffPost’s relationships email
Successfully Subscribed!
Realness delivered to your inbox

Communications Strategist & Creator of Women Want To Be On Top