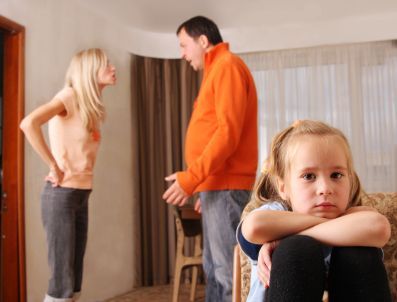 The news for couples with kids is generally pretty bleak. We're inundated by messages that children can be the death of a good relationship. That's bad enough. But what's even more troubling is that the reasons cited often ring true.

Kids invade your bedroom. They rule your schedule. They dictate where you go and how you spend your time. They spark squabbles over matters as trivial as where to put all the stuffed animals or which living room arrangement will lead to the fewest head injuries (the correct answer, by the way, is to remove all the furniture and sit on bean bags). Despite all this, I have one simple message to share: Kids don't kill relationships; adults do.

I say this knowing full well that tomorrow, yet another study will probably be published suggesting that that kids decrease marital satisfaction.

I've read all the research. I know it looks grim, but to my mind, we're all far too ready to accept this conclusion. Some of these early studies were riddled with problems, including small absolute changes in satisfaction (say, 2 points out of 50), vagaries in the measurement of "satisfaction," and finally, oversized graphs that seemed designed to exaggerate the point. Sadly, all those flaws didn't stop the press -- or the public -- from eagerly embracing the conclusion that having kids ranks right up there with STDs when it comes to maintaining a happy relationship.

In reality, each of these studies also suffers from the fatal flaw of all field research: correlation is not the same as causation.

Simply put, marital satisfaction may well drop as much as 50-90 percent after having kids, but even that stark, downward trend can never be conclusively linked to having kids, alone. It's always possible that having children is correlated with some third (or fourth or fifth) variable that deals that fatal blow to a marriage. No amount of statistical wizardry can ever eliminate this problem; it's the inevitable downside of field research.

Couples vs Kids: Round Two

Admittedly, recent studies have far fewer flaws, but there's one that the authors still haven't managed to eliminate: some couples become happier once they have children, and, to date, they haven't received nearly enough attention. Maybe it's time we studied them.

Given the much cited 50 percent divorce rate, and the strong correlation between a couple's adjustment and satisfaction before and after kids, we could just as easily look at the data and reach a different conclusion altogether: Many couples aren't very good at building and maintaining a relationship, and maybe kids just speed an already doomed couple towards marital demise. The stresses of every day life place an enormous strain on even the best-equipped couples' capacity to cope. Adding childcare to the list of duties is bound to strain them even further. In my own practice, those who weather the kid-storm tend to differ from those who are swept away in one important respect: the couples who seem happiest after children have worked hard to improve themselves.

So here's my whole new spin on the bad rep kids have in marital satisfaction studies. In the movie As Good as it Gets, Jack Nicholson, as the caustic Melvin Udall, complements his love interest with the following proclamation: "You make me want to be a better man." Allow me to paraphrase Mr. Udall: Kids can make us want to be better people.

Many of my clients have embraced parenthood as an opportunity to grow. Determined to avoid the mistakes of their own parents, they examine themselves with renewed vigor: how can I learn to handle anger better before my child is born? Maybe I should look more closely at my anxiety now. Can you recommend any good parenting books?

Not surprisingly, in my own practice, these are precisely the people whose marriages seem to improve after kids. Everyone -- especially our partner -- is bound to benefit from our quest to be a better person. Sadly, most troubled couples never get to explore this kind of thinking. Their heads are too crowded with messages that their relationship pitched off a cliff as soon as they left the delivery room.

One reason I think we're so quick to accept the gloomy outlook in the research is that we already believe kids kill relationships. Before having kids, we live with the terror of lost freedom -- by which we usually mean the freedom to stay up late watching movies or escape for a weekend without having to give any notice. Never mind the fact that very few couples actually have time to exercise these freedoms before having kids. Somehow children get blamed for the lack of spontaneity that wasn't even there to begin with. As parents, we're all too quick to project our dissatisfaction onto the experience of raising kids. We start asking little of life (often well before kids come along), and then feel deeply disappointed that life hasn't got as much to offer. The few couples who get it right end up as the exceptions to the rule -- glossed over by science, and regarded by the rest of us with the same mixture of suspicion and fear we feel when we spot the neighbor who always seems to have a smile plastered across his or her face.

Maybe there's another way. Rather than resigning yourself to the dissatisfaction predicted in the longitudinal studies, you could, like some I've people seen over the years, decide to embrace children as an opportunity for self-growth. You could use building a family as a chance to feel closer.

Here's just a sampling of the ways I've watched couples grow closer after kids -- the cliff notes, if you will. 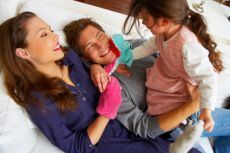 1) Jump at the chance to be with each other. When your schedule becomes squeezed by parenting demands, a carpe diem mentality can add a playfulness and excitement to intimate life that you weren't challenged to try out before kids.

2) Take a good hard look at yourself. Could you learn to be more flexible? Or a better listener? If you're open to learning new behaviors and attitudes, your kids will benefit -- and so will your partner.

3) Embrace the changes brought by kids. I learned to start viewing "going to the beach" as "going to the beach with kids" -- a slower, more meandering version of my kid-free beach days, but one that involved lots of games and breaks from packing. My wife and I both benefited by giving up our attachment to the old version. If you fight the change, you can count on tension with your partner. If you embrace it, you can start seeing things in a whole new way.

4) Use quiet times with kids as a chance to bond. Few moments provide the depth of satisfaction and emotional bonding of laying together, soaking up the bliss of a sweet, family moment. Sit close to your partner. Touch each other when you have the chance. This is family intimacy. It can only add to your relationship.

5) Celebrate when the day is over. My wife and I started a ritual of toasting at the end of the day: "We made it," we'd say; "the kids are alive and asleep. Ahhhh." We'd share the highs and lows. Parenting is a shared adventure, full of self-discovery and rich rewards. If you don't take the time to talk about it, you're nurturing distance and missing out --and then you end up as a statistic in a study.

Are you one of the couples who grew closer after kids? Let me know; add to this list by sharing your own experience in the comments.

If you like my posts, let me know! Let's connect on Facebook and Twitter. And be sure to sign up for my newsletter, for more tips and advice, as well as information on my forthcoming book, Rethinking Narcissism: The Bad--and Surprising Good--About Feeling Special, about understanding and coping with narcissism in all its forms, in our friends, lovers, colleagues-and even ourselves. HarperWave and Harper UK, July 2015

A version of this article previously appeared at PsychologyToday.com

More:
KidsParentsself improvementEmotional Wellnessself-awareness
Newsletter Sign Up
Raise the kind of person you'd like to know
Subscribe to our parenting newsletter.
Successfully Subscribed!
Realness delivered to your inbox