I had it pretty good growing up. As an only child, I was the star of the show. Every event in my life -- from my first school play to my college graduation -- elicited a frenzy of photography from the parental paparazzi. Each milestone was carefully documented in an endless series of photo albums that still grace my parents' bookshelves today. I had my parents' undivided attention, all the togetherness I could ask for, and a room of my own for when I wanted to be alone.

And so, when friends described what life as a younger sibling was like, I was taken aback. I was surprised by tales of photos scattered in boxes, never organized into albums -- or never taken at all. Of the constant flow of hand-me-downs. Of the inescapable lack of privacy. Certainly, I told myself, this won't happen if I have a second child.

Well, fast forward to the present day, and I'm constantly witnessing ways in which my toddler son is getting less than his older sister did. And yet, despite the outward appearance of deprivation, I'm discovering that the things he's missing aren't as important as I thought. Here are five ways my son is getting less -- and why I'm fine with it.

1. Fewer photo shoots. By the time my daughter was 1, I had painstakingly created three full-length photo albums of her every move. My son is almost 2, and I'm still working on his baby book. These days I'm more concerned about living life than documenting it -- picking apples, conquering jungle gyms, lounging together at the beach. While I still plan on (someday) finishing that album, I've made a conscious decision to spend my time participating in my kids' joyful moments, instead of stressing about capturing them. My son may not have as many photos, but together we're making special memories -- that I'm not experiencing from behind a camera.

2. Less new stuff. With my daughter, we were always purchasing a toy here, a book there. These playthings have slowly migrated to my son's room -- from princess tea sets to a collection of half-dressed baby dolls (occasionally missing a body part or two). And everyone is happy. Sure, some toys are missing pieces or buttons, but no more than a new toy would be five minutes after its box was opened. And, with all the money we're saving on playthings, we can do fun stuff -- like ride the carousel at the mall... again... and again... and again.

3. Less time to himself. Granted, my son's not even 2 yet, so I doubt he has a deep need for solitary reflection. But should he ever crave some alone time, he has a big sister to contend with, who's very interested in exploring his head with her feet, or uniting his stuffed bunny with her Barbie doll in holy matrimony... while he's still playing with it. His time playing solo is often limited or interrupted -- and yet, as cranky as he gets when his wooden puzzle is co-opted, I know how much he loves having someone who's always there to make him laugh, cry, and squeal with delight at every tickle.

4. Less pimpin' lifestyle. Between my son's nonstop eating and the bigger home we're starting to need, cash isn't always as free-flowing as it was back in the day. That means no more dropping dollars like we're planning a Kardashian wedding -- fewer dinners out at nice restaurants, fewer new outfits, fewer structured (and pricey) Mommy and Me classes. And, as it turns out, my son couldn't care less. He's just as happy at the library as at a music class; just as thrilled to throw Mommy's home cooking on the floor. As long as he's with his family, my son's a pretty happy little guy.

5. Less one-on-one time with Mommy. This was a tough pill for me to swallow at first. But I've come to realize that, while I can't always spend as much time alone with my son as I did with my daughter, other things make up for this change. Like my daughter teaching her brother to dance to her favorite Shakira song, or their dressing up in matching pirate gear and crying "Aargh!" as I chase them around the living room -- or those quiet moments when they think no one's watching, and my son places his head on his sister's shoulder, as she wraps her little arms around him and holds him close. Maybe I'm less a part of the picture, but the picture is a joyful one nonetheless.

Ultimately, while my son may not have Mommy's undivided attention or resources, he has something I never had -- a funny and feisty older sister to show him the ropes, make him laugh, and pick him up when he falls. And, while he may learn to ride a pink tricycle and have one baby album rather than three, he'll be just fine. In fact, he'll be more than fine. He'll be part of a family that adores him -- hand-me-down princess tea sets and all. 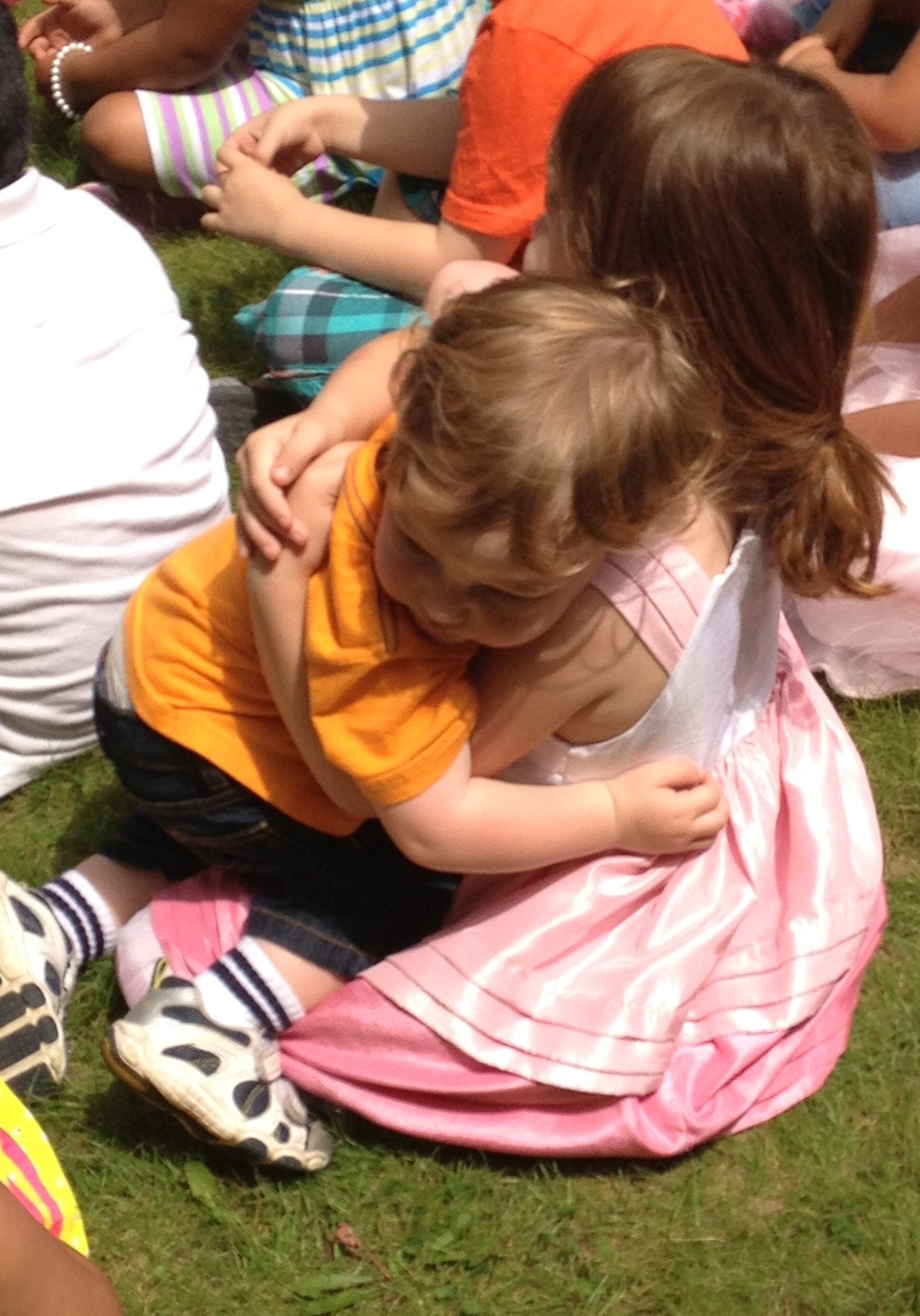