How many times have you seen a meme of a Black child embracing a White child with a caption about children being innocent and not seeing color, or reminding us that they aren't born racist? These memes tend to come out in droves when discussions about racial bias are happening. A discussion that has been ongoing in the wake of Trayvon Martin, Michael Brown, John Crawford III, Renisha McBride, Sandra Bland, and the list goes on. 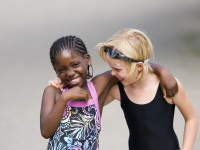 People high-five one another in the comments section and talk about the next generation giving them hope, but we all skirt around the reality that one day those same two children will likely distrust one another. None of us want to talk about how children actually learn prejudices. Instead, we all sit around pretending that everything will be okay in the future.

If we're really honest with ourselves, we will admit that things are not going to be okay in the future and that we're part of the problem. It's a hard to pill to swallow, but we need to acknowledge how we continue to perpetuate prejudice and/or racism in our everyday lives. Prejudice is an unfavorable opinion of a person due to their race, religion, sex, sexual orientation, etc. Racism is what happens when you mix prejudice with power and use the two to discriminate against a group of people in a systematic manner.*

While dismantling systematic racism is a daunting task, here are five ways parents pass down prejudice, which can lead to the perpetuation of racism:

1. We Say One Thing, But Do Another

We tell our children not to judge a book by its cover, yet how many of us actually follow through with this when it comes to people? We stereotype and judge other parents on the playground all the time. I'm not talking about shaking your head because a mom is on her phone or because they're hovering over their children. Have you ever prevented your child from playing with certain kids at the playground because they have a single mom? Have you ever turned down a play date because you're worried about their same-sex parents? It's easy to think that they're not paying attention, but we know that children are sponges and are always paying attention.

We cross the street and lock our car doors when we see someone that we deem dangerous. Do you explain to your kids that you're locking the car door because you're in a parking lot alone at night? Or do you make a scared face and hurriedly lock the door with no explanation? You could do the latter because you're in an urban city and two Black teenagers walked by with hoodies or there are a group of white teenagers dressed in Goth-like attire. If you did the former, you'd prevent your children from drawing their own conclusions about your fear and later doing something similar.

2. We Blurt Out Offensive Things During Tense Moments

I'll admit that I'm guilty of this one. When they announced the no indictment for Darren Wilson after the death of Michael Brown, I was heartbroken and livid. I yelled at the television and openly discussed my disdain for "those white people," while talking to my husband. My then two-and-a-half-year-old looked on as I cried and my husband tried to comfort me. The next morning, I felt an intense guilt and hoped I hadn't passed down this form of prejudice to my child.

I've since learned to change the channel and avoid those triggering moments when he's present. My husband and I will give one another a look that signals needing to curb the conversation. While we know the realities of racial issues in America, we both are committed to providing our son with the information from a more neutral standpoint and allowing him to come up with his own ideas based on his experiences.

"Why is everything we learned in school a lie?" One of my college freshmen asked me this in class one day during a discussion about popular culture and social movements. His question was certainly an exaggeration, but also pretty true.

When we whitewash or diminish aspects of history as a means of protecting our children, we're not providing them with all the information they need to truly understand the systems of oppression that affect us all. We do our children a disservice when we pretend that racism and/or prejudice no longer exists. Instead, we must share the truth with them if we intend to dismantle the system in our lifetime. We can do this by finding age-appropriate books and movies that share the truth of these difficult moments in our history, and then answering our children honestly when they ask questions. We can expose our children to diverse cultural activities that expose them to both the good and bad parts of history. So, don't just celebrate the Fourth of July, but celebrate Juneteenth as well.

When we tell Black children that they must wear button-ups instead of hoodies if they want to be respected. When we make comments about same-sex couples flaunting their love in public or these relationships being shown on television. When we focus on what young women wear that "tempt" men. When we promote laws that place gender non-conforming people in danger.

We are teaching our children that only certain people deserve respect. We're telling them it's okay to show bias to someone who does not perform their roles in society the way we deem appropriate. We're teaching them to stereotype groups and leading them down the road of prejudice even though we think we're just protecting them.

The dangers that we are concerned about are definitely real, but we must explain those dangers to them. Instead of saying that hoodie makes you look like a thug or those shorts make you look like a hooker, we must sit down and explain to them the ways they may be viewed by people who are racist, sexist and/or prejudiced. Put the shame on society instead of the victims.

5. We Stay Silent During Uncomfortable Moments

"In the end, we will remember not the words of our enemies but the silences of our friends." This famous quote from Dr. Martin Luther King Jr. always comes to mind when I'm tempted to stay silent in an uncomfortable moment. If you stay silent when your family and/or friends discuss hot button issues and state their prejudice loud and clear in front of your children, you're silently agreeing with the sentiments. Sure, you could talk to your children about it later to let them know that you disagree, but if you want to raise a social justice advocate, you need to model that behavior by speaking up in front of everyone.

I remind my family and friends often that I will not allow them to express prejudice against any group in front of my child. It's counter-productive to the person I want him to become. I recently found myself engaging in conversations about Target's gender-neutral bathroom stance and despite wanting to just walk away because the situation became a bit hostile, I didn't. I kept talking and providing facts about the issue because it's what I would want my son to do as well. I also know that not so long ago people who looked like me weren't allowed to use whatever bathroom they wanted, and I'm grateful to those who didn't stay silent in those moments.

Ask yourself if you want your child to be the one preventing a young girl from using the girl's restroom at school because her hair is short and she's not wearing a dress, or do you want them to be the child standing up for that little girl? Our prejudices can make the difference between our children being bullies or advocates. 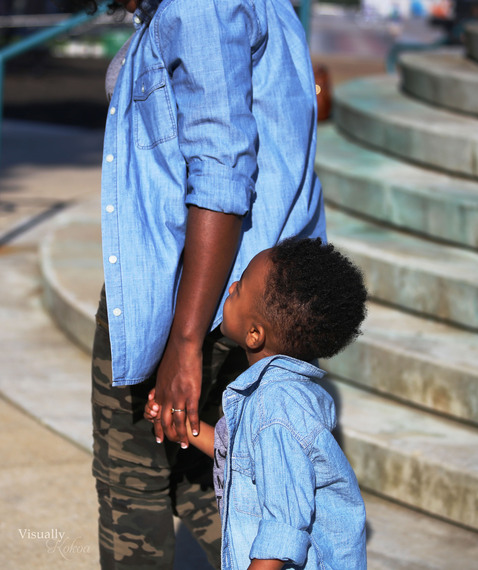 Raising children is hard. Raising children who are socially conscious and aware is even harder. Admitting that we are part of the problem is probably the hardest thing ever. If we can all work to remove these five things from our parenting, I think we'll be further along on the journey towards acknowledging our privilege, checking our prejudice, and putting down our pride. The good thing is we don't have to do this work alone, we can do it together. Join me and other parents for Raising an Advocate's inaugural course, "Exposing The Three Ps: Privilege, Prejudice, and Pride."

*If you're interested in learning more about systematic racism and prejudice, check out Privilege, Power, and Difference.

Danielle Slaughter is the voice behind Mamademics, as well as the creator of Raising an Advocate, where she shares resources and offers courses on social justice advocacy in parenting. You can follow her on Facebook and Twitter.

More:
Parents social justicesexismRacism
Newsletter Sign Up
Raise the kind of person you'd like to know
Subscribe to our parenting newsletter.
Successfully Subscribed!
Realness delivered to your inbox