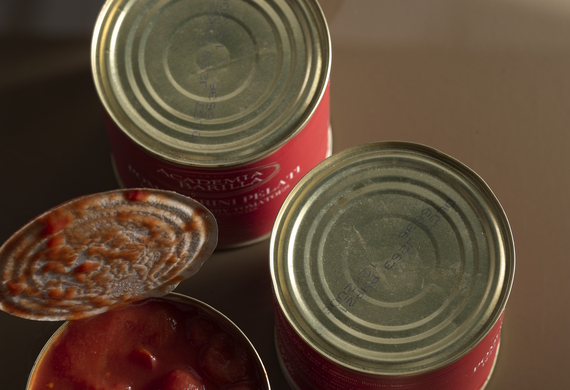 A new study has found that nearly 70% of cans randomly tested from retailers in Canada and 19 U.S. states contain bisphenol A, or BPA, in their plastic lining.

Many of the BPA-containing cans came from companies that have claimed to be moving away from the substance, including Kroger -- which announced in 2011 that it would eliminate BPA in canned goods -- and the Campbell Soup Company, which made similar announcements in 2012.

However, the study -- which tested 192 cans -- showed that BPA was found in all Campbell cans tested, 70% of Del Monte products, half of Progresso and Green Giant cans, and many of the private-label cans sold by Kroger, Albertsons, Trader Joe's, Walmart, and Target, as well as in dollar stores.

While the U.S Food and Drug Administration maintains that "BPA is safe at the current levels occurring in foods," research has linked it to endocrine disruption in fetuses and children, leading to sexual and reproductive development problems, and increased risk for breast and prostate cancers, infertility, type 2 diabetes, obesity, asthma, and attention deficit disorder.

Related: More Than Half of What You Eat Isn't Even Real Food, Study Finds

So if BPA is supposedly safe, yet it's been linked with potential health problems, what are we supposed to think about it? First, it's important to understand what it is.

"Bisphenol A is a man-made chemical that's been around since the 1940s. It's a building block to form a polymer, which is in plastics," explains Dr. John Jalas, MD, PhD, a pathologist at Providence Saint John's Health Center. "Practically everyone in this country has this chemical in our blood at this point. I kind of think of it as the collateral damage of human progress. Of course, we want the luxuries and convenience of modern chemicals, but none of the toxic side effects."

A lot of the concern about BPA exists because its chemical structure is similar to estrogen, and can mimic estrogen's effects when inside our bodies. This is how it's linked with early puberty and higher risk for cancer.

"The real fear with BPA is how it affects kids," explains Dr. Jalas. "There are slam-dunk links we know about, like tobacco and lung cancer, where the cause and effect are very clear. And now, we're seeing links between dietary factors like red meat and colon cancer. When trying to assess risk with environmental chemicals such as BPA it gets a lot more nebulous. But based on everything we know about what this compound does in animal studies, the risk is greater in the developing body (babies, children, adolescents); in a mature adult, the risks are very low."

If you want to avoid BPA, it is possible. Here are some ways:

All plastics have a recycle code somewhere on them. Plastics marked with 3 and 7 are more likely to contain BPA, so avoid using those products when possible.

Some products have switched to a similar compound, BPS, which studies have found might also have effects on health. Look for labels warning against both compounds, which are more and more prevalent. Alternately, look for traditionally canned foods in cardboard boxes, which Dr. Jalas says are unlikely to contain harmful compounds.

Aim for fresher versions of canned foods when possible.

Canned foods prevail because of their convenience and lower cost, but it's not impossible to make the switch to less harmful alternatives. Dried beans are ultimately less expensive, and totally easy to prepare. Homemade soups are also simple and cheap to make ahead and freeze -- with a little preparation, your need for canned soup will all but disappear.

Commit to the parts of your health within your control.

While it's impossible to live a 100% safe life, there are still a lot of things you can do to take control of your health. "We cannot live this life without being exposed to danger. It's impractical to think you can reduce your risk to zero for anything in this life," he says. "Use common sense, avoid exposure to too much of anything, eat fruits and vegetables, exercise, stay healthy and active."

Dr. Jalas also recommends being pro-active about carcinogens we're 100% positive about, like tobacco, which you should avoid at all costs. Also on his health check list? HPV vaccinations, particularly in adolescents, and regular doctor visits for check-ups and testing.

"This is what we know for sure works," he says. "It's boring advice, but it's right."

Need more healthy food tips? Be sure to check out these 10 Healthy Food Hacks That Don't Suck.

More from Teen Vogue:
3 Ways To Decode (And Deal With!) Emotional Food Cravings

Why This Celebrity Diet Trend Is All a Hoax

Here's The Truth About Going On A Gluten-Free Diet