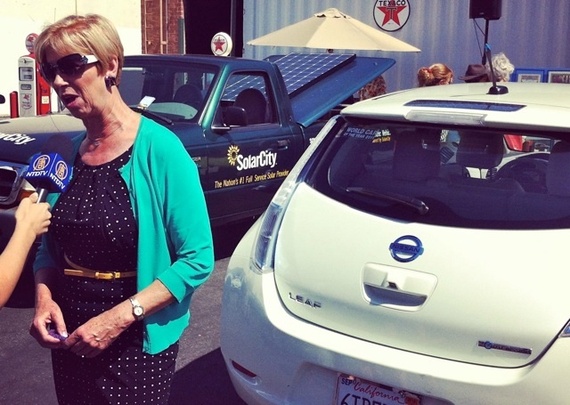 People already driving electric cars have fallen in love, as shown by off-the-charts customer satisfaction ratings. But for the vast majority of Americans who aren't yet driving electric, how do we get them charged up?

In our last two blog posts in this series, we talked about the large number of people we need to switch to electric vehicles (EVs) if we're to have a shot at averting the worst of climate change, and the types of public policies -- like cash rebates -- that will incentivize people to drive EVs.

But we won't win over the mass market if we aren't educating and exciting the public. Here are five ways to get more Americans interested in buying EVs:

It's probably not a coincidence that the BMW i3, the sporty new electric car, had one of its best-selling months following the release of a hilarious Super Bowl television ad, with more than 18 million views on YouTube -- not to mention the millions who saw it during the big game. You also may have seen this Cadillac ELR EV commercial, aimed at the luxury car buyer. Another ad, which cleverly parodies the Cadillac ad, is about the Ford C-Max Energi Plug-In Hybrid and is seriously funny. But these EV ads are the exceptions to the rule. The vast majority of car commercials we see are for gas-guzzling SUVs and pick-up trucks. Come on, automakers.

By contrast, a switch to electric vehicles will lead to cleaner air and lower carbon emissions -- public goods that benefit all Americans. Government agencies and nonprofits have invested in public service announcement (PSA) campaigns to promote seat belt use (i.e., "Click It or Ticket") and prevent wildfires (i.e., Smokey the Bear), and these campaigns have changed America for the better. Public utilities fund direct-mail campaigns about energy efficiency, and we've made big improvements on that front too. Why not PSAs and mailings re EVs?

A number of persistent myths surround EVs: They're too expensive, not any better for the environment, unsafe, slow, can only drive short distances, are a hassle to charge, etc. Chris Paine, the documentary filmmaker behind Who Killed the Electric Car? and Revenge of the Electric Car, busts several of these myths in this entertaining Washington Post article, and Sierra Club does it here. We need to do more to set the record straight.

3) Events: Get butts in seats.

One of the many counterintuitive findings of social science research is that people's attitudes tend to flow from their actions. Most EV drivers will tell you that they didn't really understand what all the fuss was about until they actually rode in an electric car and experienced first-hand how fun, cool, and fast these cars are. We need to give people more opportunities to test drive EVs. During last year's National Drive Electric Week, upwards of 90,000 people attended events in 150 cities, and thousands of people took test drives. The fifth annual National Drive Electric Week will be September 12-20 this year, and organizers (Sierra Club, Plug In America, Electric Auto Association, and local partners) are already gearing up to make it bigger than ever.

Workplace test-drive events are another great opportunity to get people talking to their friends and co-workers about EVs -- and to take them for a spin during their lunch break. Consider organizing one yourself.

It's terrific that actor/activist Ed Begley Jr. talks up his electric car, and we're heartened to know that celebs like George Clooney and Cameron Diaz drive electric too. But we need more high-profile celebrities, politicians, and business leaders driving EVs and actively promoting them in traditional and social media. Readers of People, The Hill, Buzzfeed, and the Wall Street Journal may have varying role models -- and most of them buy or lease cars.

5) Understand and appeal to new people.

EVs can excite a wide range of people with all sorts of interests. The new documentary film The Burden, to be screened in the coming days at a film festival in D.C., makes the argument that EVs are appealing to veterans and national security hawks who want to slash our dependence on foreign oil. Last week thousands of car-racing enthusiasts took to the streets of Miami to watch Formula E, where professional race-car drivers show off their talents in blindingly fast EVs. Those of us looking to accelerate the EV market need to seek out and understand all sorts of audiences.

The Center for Sustainable Energy conducted a survey showing that California EV drivers prioritize issues like carpool-lane access, fuel-cost savings, and emissions reductions -- and fit certain demographics. But we need much more information about what messages, which media outlets, and which spokespersons will excite people. If your company or group is researching this information, don't be greedy! Share it with other EV advocates, utility companies, government officials, and car companies looking to accelerate the EV market. Working smartly together, we can electrify the masses.

Mike Walker is the founder and CEO of AlterAction, and his blog is here. Gina Coplon-Newfield is the Sierra Club's Director of Electric Vehicles Initiative. This is the last in their joint blog series.