They all come back, don't they? Once they've grown, matured and realized the mistake they made. 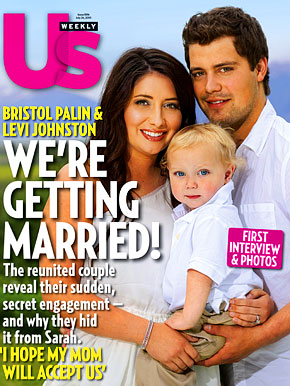 I woke up a few weeks ago to an US Weekly shocker: Bristol Palin and Levi Johnston had not only reunited, but took to the tabloid magazine to announce their engagement. This was about as much a "WTF?!" moment as Sandra Bullock coming out of hiding to announce she adopted a little boy from New Orleans while divorcing her husband.

I guess we shouldn't be surprised (and after living in Los Angeles for so long, I'm not quite sure why I let anything shock me), but still ... no matter if you couldn't stand the Palin family, you have to admit that Levi's actions were beyond douche-baggy. So for Bristol to forgive him and welcome him back into the family (although we'll see how long this lasts) you have to wonder if she's a poster child for forgiveness or just sick in the head. Yes, there is a child involved, and I'm all for putting the kids first, but unless Levi has changed (and Bristol too), then there is NO way this is going to work out. (Profound, I know). But for their sake (and Tripp's), I hope it does.

Which brings me to the issue at hand: what happens when your ex comes back? Do you let them in? Forgive and forget? Start anew? I recently was faced with that very same question when my ex came back into my life after a two-year hiatus. It wasn't as dramatic as Bristol and Levi, but it sure threw me for a loop (and that's putting it mildly). And as a relationship columnist, it made me really search for the answers as to why these guys come back -- because they really do all resurface, don't they? And what you can do to make sure this time around is different, for the better.

I never knew a decision could be so easy and yet so painful at the same time. Telling my boyfriend of a year that I didn't want to him to contact me ever again (unless he grew up) brought on feelings of relief and deep mourning. I was sick of his games and lack of respect, but this was also the same guy that I felt deep down was my future husband. Having to face the facts that this was not the right guy for me (at the moment) was awful -- especially since I knew he had the potential.

And yet, even though I knew one day our paths would cross again, it didn't make saying goodbye any easier. In fact, because I felt so strongly about him, it became almost impossible to move on. I dated, even entered in to other relationships, but I somehow knew this was the cream filling of the Oreo until he came back to bookend the other half. (Although isn't the middle the best part? Nevermind. We'll just got with it.)

Almost two years to the day that I sent that fateful email, he did come back (well, in the form of an email at least). When I saw a Happy Birthday email in my inbox (because as my other guy friends said -- "it's a safe 'holiday' for a guy to reach out"), I felt both elated and scared. Elated that maybe he had finally grown up and this was the beginning of a better relationship, and yet scared to death that he hadn't changed at all. Telling him to take a hike the first time was difficult enough. I didn't know if I could do it again.

What's more ironic, is that in the two months since he first reached out, two other exes have also come out of the woodwork. Was there some sort of secret contest I had no idea about? "Reunite with an Ex and Win a Trip to the Playboy Mansion!" "Apologize to an Old Girlfriend and Take Your New Girlfriend on a Trip to Hawaii!" I mean, how else do you explain all these guys coming back into my life at pretty much the same time?

As for the ex that I saw myself with for the rest of my life, it is still too early to tell what will happen. And I've grown enough to know that. No matter how I feel (or felt) about him, he still has a lot to do to earn my trust and respect. He apologized for past behavior and recognized how hurtful his actions were. And as it turns out, we are both planning a move to the same city by the fall. We're talking. Nothing more, nothing less. Time will tell if the timing is really right this time.

In the meantime, if you're just about to break up with someone, or have just cut off ties, here's my list of what to do and how to act if you want them to come back (only because they have potential). If they were verbally or physically abusive, then they used their only chance up long ago. But if it's just a matter of timing and maturing as a person, then if I'm any indication, they'll be lining up at your door in no time.

1) Go Out Classy When I said adios to my ex, there was absolutely NO derogatory language. Sure, I was upset and angry (and I made damn well that he knew that), but I also kept it PG-13 rated. Why? Well, for one, the minute you start throwing F-bombs all over the place (no matter if it's in your regular vocabulary), it diminishes the effect of what you're really trying to get across. Trust me, he'll think better of you if you keep it clean.

2) De-friend Him on Facebook and Twitter Yes, it might seem harsh (especially if your ex doesn't make a big deal out of social networking sites), but it's even worse having to see whom he's friends with now, or what his plans were last Saturday night. As for me, I not only de-friended my so-called ex, but I blocked him as well. We had so many mutual friends that even seeing him comment on their photos and statuses were enough to make me think about him way more than I wanted to (and trust me, I already was -- a lot). Plus, the benefit of him not seeing you on his Facebook feed is that he's going to wonder about you way more than if he had a portal into your everyday life.

3) Don't Ask About Him I did my best to remain friends with my ex's friends, and I don't think it could have happened unless they were so adamant that I stay in their lives. But it mainly worked because I didn't ask about my ex, and I made sure they didn't talk to me about him. It was too painful to hear about what he was up to, and it also ensured that I was friends with those guys because I truly enjoyed their company, and not because they could fill me in on all the dirt.

4) Date and Live Your Life Even though I always knew my ex would come back (and no, I'm not a psychic; nor am I related to one), I wasn't that gifted that I knew when that would be. So I had to go on with my life and do my best to put the past behind me. When you feel you're ready to date again (and trust me, initially you want and NEED to take some time for yourself), then get back out there. Live life. Have fun.

5) Work on Yourself When I was with my ex, I was so happy to be with him that I literally put him on a pedestal. I was so concerned with pleasing him that I forgot to make sure he was pleasing me (which I finally did when I told him to get out and grow up). Now that he is back in my life, I'm no longer putting all of his feelings first. It might take two to tango in a relationship, but it also takes two to make it work.

Eventually, they all (mostly) come back (granted, there are some that are that stupid and may never realize what they missed). It may be an email out of the blue or an unexpected run-in. But the best way to make that happen and make them want you back, is to be the best version of yourself that you can be. Yes, it's kind of after school special of me to say, but it's so true. If you treat yourself with the respect you deserve, stay classy and show that you're worthy of better, it will go a long way in making him take a hard look at what he gave up.

And to my ex -- you only get one more chance. Otherwise, I hear Jake Gylenhaal is available.