This is the season of soulmates. Couples are jockeying for space in candlelit restaurants, trying to find the right mood to share sweet-nothings and chocolate kisses. Rom-com marathons are running relentlessly on every channel, bathing us in the glow of endless love and laughter.

Cupid too, is on the scene. And it's game on. He's like a little matchmaking superhero with a backpack full of passion, aiming for all those hopeful singles willing to make themselves love's target. Much respect, Cupid. Love is hard work.

If you've recently been shot with Cupid's arrow, and you have a guy, then the cocktail of Adrenalin and Oxytocin is flowing through your veins. The delicious feeling of love is quickly becoming a permanent part of your system. 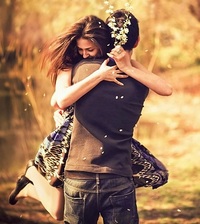 There's just one thing. How can you know if he's "The One"? Is there some way to be sure? You tried to get advice from your girlfriends, parading your guy around the circle like a poodle at the Westminster Dog Show. They all gave him thumbs up. But with their track record -- are they really the best judges?

It's so hard to know if your valuable time, effort and eggs are worthy of this man. How can you really know if he'll be a good husband and father?

One scientist has an answer. Dr. Mary Main, developer of the Adult Attachment Interview (AAI), shows that early childhood relationships and experiences are extremely influential in shaping adult attachments. The better the relationship he had with his parents, the more stable his level of attachment to you and your offspring.

Of course, many of you knew this intuitively, but Dr. Main quantified this in her famous research. The Adult Attachment Interview is a series of questions designed to determine an adult's attachment style and is based on "attachment theory," pioneered by John Bowlby in the 1950's. Bowlby and Main theorized that a child needs a secure relationship with at least one primary caregiver for successful social and emotional development.

Dr. Main discovered that how an adult describes his or her childhood directly correlates to their current attachment style and how they "show up" in current relationships. She found that, almost invariably, people fall into four distinct attachment categories that may be identifiable in your partner. The first indicates a more securely attached person. The last three are more problematic and worthy of a closer look.

Dr. Main also found out that with therapy, insecure attachment styles can be changed. So there is hope -- if he's willing to get on the couch for more than a few sessions.

Armed with this research, you can now become Nancy Drew and do a little investigation into his childhood. After all, it's better to browse the back cover before committing to reading the entire novel.

Ask some questions; dig a little. Find out if your love connection can handle a couple of pokes with Cupid's arrow. Did he have a happy childhood? How close is he to his mom and dad?

Start with the basics. No need to dig too deep at first. You're not trying to go all Oprah on him, dredge up the past, make him cry and freak out. Just ask him about his birthplace and hometown. Point out the scenery in some of his childhood pictures. Was it a fun place to grow up? Was his home as comfortable as the pictures make it look or was money tight? Did his mom or dad teach him to tie the tie he's wearing in that family shot?

A few warm-up questions will give you a better feel for what his family, home and life were like when he was a kid. Try a little time travel. Ask your guy how far back he can remember. It's an interesting enough question that he might just play along. Ask if he remembers going places or doing things with his parents. Share a memory of your own to get him going.

He might remember riding on his father's shoulders, playing with his mom at the park, or being dropped off at the home of his grandmother. Whatever the memory, consider your guy's tone and choice of words. How is he describing the memories? It may be a red flag if he's rambling, incoherent or unwilling to recall those days at all.

Play "relationship recall." Okay, so that's not a real game. And it's not as much fun as Cards Against Humanity or Xbox. Still, just pour a big glass of wine and see where it goes. The rules are simple: toss out five words that reflect your relationship with your parents when you were little kids.

If you catch him eyeing the remote, try it with photos. Grab photos of his cousin, best friend, his little brother, and parents too. Ask him to tell you about them all. It may take more time to get to mom and dad's pics, but hopefully, he'll get there and you'll be in a better place to assess if he's "the one."

His stories may give you clues about his parents' role in his everyday life. You may even be able to tell which parent was his favorite and which gave him trouble. Whatever the response, you know a little more about his attachment style.

Mull it all over. Feel free to hand over the remote now. You should have some pretty good intel. Consider what you know.

Are your guy's childhood memories more Huxtable or Kardashian? Did you notice words like controlling, absent, or typical? Could he talk about his parents without grinding his teeth, stonewalling or becoming a rambling mess? Did you sense there was more to those jokes about the way he was disciplined or the "independence" of being a latch-key kid?

This is important stuff. It all has an impact on how he attaches to you and any future children.

All of us have scary moments and hard times as kids, but not all of us tell the stories the same way. Take note if there is a lot of rambling or mystery sections in the timeline. It may be that his childhood insecurities will make it difficult for him to have a secure relationship with you now.

Red light? Green light? So, is he "the one"? While it's true that not everyone can be painted with the same brush, there are some pretty straightforward, secure attachment traits that signal a go:

If your guy felt welcomed, included, and valued as a child, your chances are good. If you've decided he's the one, congratulations. If not, never fear, Cupid will come around again next year. Love is hard work either way, but secure, attached love is always worth it.

Main, M. and Solomon, J. (1986). Discovery of an insecure disorganized/disoriented attachment pattern:procedures, findings and implications for the classification of behavior. In t. Braxelton and M.Yogman (eds) Affective development in infancy. Norwood, NJ: Ablex

Main, M. (1990). Parental aversion to infant-initiated contact is correlated with the parent's own rejection during childhood: The effects of experience on signals of security with respect to attachment. In K.E. Barnard & T. B. Brazelton (Eds.), Touch: The foundation of experience (pp. 461-495). Madison, CT: International University Press.

George Sachs PsyD is a clinical psychologist in private practice on the Upper West Side of Manhattan. He has appeared on NBC Nightly News, CBS, and WPIX. For more information on Dr. Sachs or the Sachs Center, visit the sachscenter.com.