Good news, friends: we're almost done with the worst of the 2016 political shenanigans. But the fat lady hasn't sung yet. 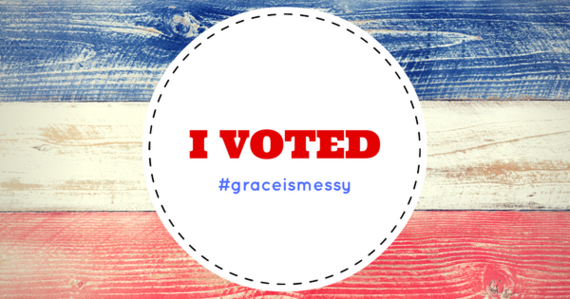 What do you do when you can't turn on any form of media without being smacked by slinging mud? You take good care of yourself.

Here are 5 simple ways to practice self-care during the most volatile election season in recent memory.

1. Give yourself space to breathe and just be.

I agree that every vote counts. I also support those who want to be informed voters. But neither of those two things require you to get into heated political debates. You also don't have to force your eyes open with toothpicks, in order to see the latest Wikileaks emails. Put the phone down. Close the laptop. Turn on a rerun of The West Wing (Bartlet for America!). The world will keep turning, whether you are watching or not.

What is one thing you could quit today to give yourself some space to breathe?

Countless people have confessed that Donald Trump exacerbates their anxiety. If that's true for you, don't watch him. And if you're a sexual assault survivor and the mere sound of his voice causes you flashbacks, leave the TV off. It would not be too extreme a decision to take a social media fast for the week. Do what you need to do to take care of yourself.

When anxiety strikes, whether it's a panic attack or just an extremely anxious day, I need reminders that they don't last forever. What's something you can write down right now that you need to remember the next time anxiety hits?

Today, focus on the small joys of each moment. Maybe you could even write them down.

3. Remember: this will be over soon.

Good news: political freak shows don't last forever. Take a few extra deep breaths on your lunch break. Hide in the server room if you need to get away from aggressive co-workers. Know your limits and step away when needed. If Sunday school is nothing but political banter, read your Bible at home. You've only got to make it one more week, friends.

4. Give yourself permission to say "no."

You do not have to engage anyone in conversation. If you don't feel comfortable dialoguing about politics, you have two choices: speak up for yourself and say "no," or avoid them like the plague.

If you can't see eye-to-eye with your parents or your pastor, you have permission to disengage until the dust settles! Chances are, your political argument with anyone at this stage in the game will not affect the way either of you vote on November 8th. This also goes for not engaging people on social media.

5. You don't owe anyone an apology for your political affiliation.

If people know who you are voting for and want to judge your character or your faith based on your choice for President, let them. They aren't your conscience and their opinion doesn't matter. You have the right to vote for whomever you choose and you even have the right not to vote. (Though, I really hope you don't exercise that right this time.)

My life changed when I started letting others' opinions go. Not everyone in the world is kind. Not everyone follows the golden rule or practices self control over their words. Not everyone has your best interest in mind. The fact remains that some people are jerks and there's nothing you can do about it.

Here's the truth, friends: Presidents come and go. I'm certain there have been other Presidential candidates you haven't loved. But to be frank, they aren't sleeping with you, and they aren't coming to your funeral. No matter what happens, all you can do is focus on yourself, your family, and the things that matter most in life. On November 8th, some of us will cast ballots and others will stay at home. But on November 9th, life goes on.

Get my brand-new book, Self-Care for the Wounded Soul, today at graceismessybooks.com!