Yes, it is true. You can. Each and every one of us can make a difference. How? By making small, but important, choices. Here are some easy examples of how you can start to make a difference:

1. Only eat sustainable and responsibly fished seafood. How do you know what is okay to eat? Go to http://www.seafoodwatch.org/, the app updated regularly by the Monterey Bay Aquarium and when you go out to eat...check to see which seafood on the menu is sustainable. The lists are separated by area of the country (or world), and given a Green, Yellow, or Red light. Red means the fish is critically overfished. Ever wonder why Red Snapper is hard to find these days? They've been overfished, and their populations have critically declined. You can read about it here, at NOAA Fishwatch. In some areas of the world it is okay to eat Snapper...fresh, line caught snapper....but in others, the populations are not sustainably fished. By using the SEAFOOD WATCH app, you can check which fishes are okay to eat, and which ones to avoid. Here is the worst cop out of all: well, it's already dead so I might as well order it. It is the demand for it that drives over-fishing. When people realize that in order to eat Red Snapper in the future they must not order it now, our fisheries will recover. Until then, if it is on the Red List, don't eat or order it!

2. Do not eat at restaurants that serve any endangered animals. Do not eat at restaurants serving shark. Any kind of shark. Why? Sharks are endangered. If we lose our sharks, our oceans will collapse. That seems pretty dramatic, right? But it is true. Sharks have been around for 450 million years. They are the apex predator (except for humans) in the ocean. They keep marine populations in balance. Sharks tend to eat the older, sicker, slower members of a population, which keeps that population healthier. They keep populations in check, which protects other food sources in the ocean like grasses, plants, corals, mollusks, etc. The foodweb is a constant balancing act, and sharks are a keystone species, meaning that they must be in the ecosystem or that ecosystem will collapse. Sharks kill around 5 people a year. Humans slaughter 75 to 100 million sharks a year, mostly for their fins.

3. When you travel, fly airlines who do not carry endangered species cargo. American Airlines recently announced it will no longer carry shark fins! They join, just to name a few, Air New Zealand, Air Pacific, Cathay Pacific, Singapore Airlines, Jet Airways, and United Airlines. Many, many carriers are joining the crusade to stop transporting ivory, rhino horns, shark fins, manta fins, sea turtles and other endangered species parts. Choose your airline based on this kind of criteria. If they contribute to the shark fin trade, do not fly them. And let them know why you won't fly them. Use social media to chastise any transport of these endangered species parts. UPS just banned shipping these items and we need other shipping companies to ban them also!

4. When it comes to trading in endangered species, we know the major consumer is China. Other Asian countries are also consumers, but the heart and soul of the shark fin trade is in Hong Kong. The nation of China has stopped serving Shark Fin Soup at state functions...a huge leap forward! Hong Kong has recently followed suit. 95% of shark fins are consumed by Asian countries and go through Hong Kong. The trade is beginning to decline, but we have to keep up the pressure. Shangri-La Hotels and the Peninsula Hotel Group just announced they will no longer serve shark fin soup, bird's nest, or black moss, all endangered. If you are traveling to Asia, ask the hotel if they sell shark fin soup, any ivory products, or anything with rhino horns. If they do, make the decision not to stay there, and let them know why.

5. Don't buy Chinese medicines with rhino horn, shark liver, or any other endangered species ingredient. Believe me, no scientific study has ever shown that these ingredients cure disease or serve as an aphrodisiac. If there is no demand, the trade will collapse.

A very friendly Hawksbill Turtle who swam right to me. Hawksbills are critically endangered thanks to BP oil among others.

Do you know the extent that humans depend upon the ocean to live? The Nature Conservancy points out that the ocean absorbs 1/3 of human produced carbon-dioxide and supplies us with oxygen. The ocean plant Kelp is used to make salad dressing, dairy products, shampoos and medicines. Compounds from the coral reefs, plants and animals, help treat numerous diseases, and research looks promising for more medicinal uses. Oceans produce 70% more goods and services into our economies and GDPs than land products. Each and every one of us needs the ocean healthy in order to survive. We all have a responsibility.

Rob Stewart, producer of the film Sharkwater, and Revolution, said this recently on his Facebook page:  "by 2050, we will live in a world with no reefs, no rainforests, no fish, and 9 billion hungry people." You might not be here, but if you have children or grandchildren, they will be. It is horrifying to think about how catastrophic living in that world would be. There are only a finite amount of resources, and we cannot keep allowing our population to grow without serious consequences to the quality of human life.

Start small, but start soon! If we all make small, good decisions, we can make a big difference. 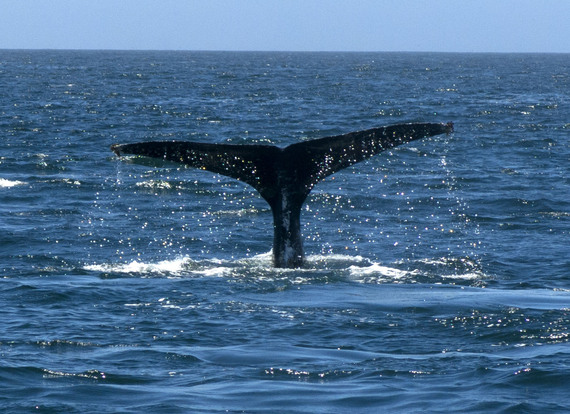 (All photos by Tam Warner Minton).