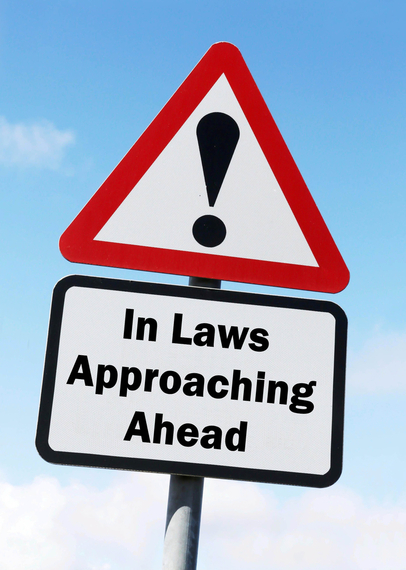 Here's a news flash: You can't choose your in-laws any more than they can choose you. Many rationalize that after the wedding tensions will dissipate. If that were true, the terms "monster-in-law" and "bridezilla" would not exist, and we would never feel like we were starring in our own reality TV show.

Most times, when starting out with challenging in-laws, the post-honeymoon portion of the show results in a dramatic climax with cameo appearances by an often unsuspecting cast of characters. I've dipped my big toe into this risky topic pool once before, and am now ready to take the full plunge. Here are five coping mechanisms I've developed, which I'm still laboriously practicing and pledging in writing to continue to rehearse:

One of my favorite things about my mother-in-law is her ability to express herself without compunction and her commensurate ability to agree to disagree. She respects that, like her, I'm outspoken and have strong feelings about most (okay, all) topics. We've had our share of arguments and may not always see eye-to-eye, but I've learned to avoid topics that will result in a problem. In the past, those topics included me working full-time, part-time, and being a stay-at-home mom. We also no longer discuss whether it's appropriate for "females" to travel for work, and what is a "woman's role" in the home. Taking deep breaths even as I write.

I realized we had a budding issue more than 20 years ago when my father-in-law interrupted my studying for the Bar Exam, as I sat next to his son -- my husband, who was studying for the medical boards, to tell me it was time to come help my mother-in-law make dinner. I wanted to scream, but I didn't. Guess who would've looked like the schmuck if she made an issue out of it? But I can't pretend that that first seed of resentment wasn't firmly implanted...

2. Not engaging emotionally in things you can't control.

My husband is a huge advocate of not engaging emotionally (and not investing energy) in issues that he cannot control or change. Maybe it's a guy thing, but it took me a long time to begin absorbing this via marital osmosis. My in-laws are integrally involved in raising two of their other grandchildren and often act as their surrogate parents. This brings parenting issues to the forefront of many of our interactions. For example, I've never understood threatening your kid with "Don't come home with less than an 'A'." In addition, we don't share the same political and social views so when discussions escalate, it's best to disengage. As an added bonus, my in-laws' extreme helicoptering style makes me look like a free-range parent -- a title no one who knows me would ever use to describe me -- so I try to enjoy wearing the laid-back, chill mom hat when I can.

3. Going limp and deflecting when necessary.

Going limp means not reacting to everything I hear and see. I'm not going to change it anyway, so what's the point? When my in-laws rewrite history and tell stories that are so wrought with inaccuracies they may as well be fairytales, I remind myself that correcting them would serve no purpose. Besides, my parents do it too. (My kids say I already have a selective memory, but that's just their teen hormones talking.)

It's hard for me to go limp when it comes to my children, so I try to deflect instead. When my father-in-law asked my son about his grades and future plans, then turned to my daughter and asked about her latest shopping spree and whether she had a boyfriend yet, I nearly had a heart attack. With my last breath, I mentioned her favorite subject in school, good grades and latest interests. He pleasantly surprised me by engaging her appropriately, and this beat the all-out-brawl that I could've started instead if I'd engaged and gone on the attack.

4. Reducing your level of expectation.

Expectation breeds disappointment so I've learned to assume nothing and hope for the best. Personal presumptions range from serious moral issues to mundane annoyances. Is it reasonable to expect to be treated EXACTLY the same as your mother-in-law's own daughter? Is it reasonable for your father-in-law to expect to be called "Dad?" My mother-in-law always has the grace to ask if she can help out in the kitchen, but her timing coincides with the drying of the last dish. This used to drive me up the wall, but no longer, as lowering my expectations has mitigated my exasperation. And when I'm pleasantly surprised with help when I need it, I embrace it.

I was raised by parents with equally high expectations for their male and female children. Our family discussions are dominated by raucous debates, requiring a loud voice and strong facts. My siblings and I weren't part of the debate team in high school. We had practice every night at dinner. That doesn't make my family right or good. It's just how I was raised and what became ingrained in my fiber. Don't get me wrong, my parents drive me nuts, but it's the kind of nuts I grew up with and know how to navigate. After 23 years of marriage, I'm still caught off guard by my in-law family's dynamics - not because they're worse than mine, but because they're different, and I wasn't groomed from birth to negotiate their particular set of rules. The law made me part of another family but my inherent training has not caught up to the law. For me, realizing this has been half the battle.

I know that in-law relationships range from the good and bad, to the downright ugly. While my journey hasn't always been easy, I'm at peace with my current situation and I'm appreciative that my in-laws will read this post with a nod of agreement and even a grin. Please post your comments and experiences below and may you not suffer marital or extended-familial repercussions as a result of sharing your experiences.