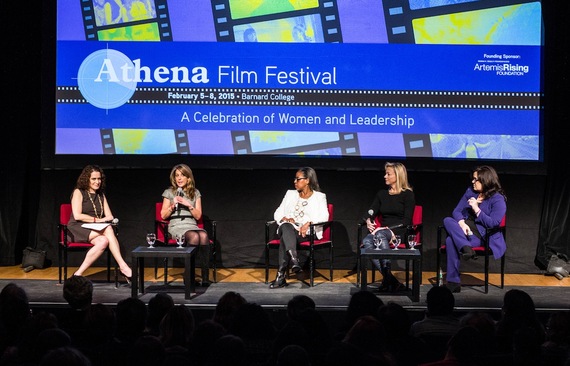 Women leaders at the 2015 Athena Film Festival at Barnard College in New York City. The festival is celebration of women in leadership -- a weekend of features, documentaries and shorts where a woman in a leadership role is the protagonist of every story. Photo courtesy of Barnard College.

When Sheryl Sandberg, COO of Facebook, was doing research in 2010 for her now-famous TED talk, "Why We Have Too Few Women Leaders," she came across a striking social pattern: When women are in positions of power and are ambitious, assertive and successful in their work, they are often labeled as aggressive, bitchy or unlikable, whereas a man exhibiting the same qualities is seen as confident and likeable.

It was somewhat shocking to hear this spoken out loud back in 2010. Now, even though it is discussed openly and widely, the problem remains deep, and a remedy hard to come by.

This is a real trap for most of us women because we care about being liked. In fact, our brains are wired for this.

According to Louann Brizendine, M.D., a neurobiologist and psychiatrist at the University of California, San Francisco, our distinct female biology provides an explanation of why we are so focused on gaining acceptance from others.

It turns out that compared to the male brain, the female brain has a larger communication center and a larger area for processing emotion and reading social cues, therefore leaving women and girls more emotionally sensitive than men and more aware of social disapproval.

In her bestselling book, The Female Brain, Dr. Brizendine explains that because baby girls are born interested in emotional expression, they take meaning about themselves from a look, a touch, every reaction from the people they come into contact with. "From these cues they decide whether they are worthy, lovable or annoying," says Dr. Brizendine.

She goes on to say: "Whether or not she is being listened to will tell a young girl if others take her seriously, which in turn goes to the growth of her sense of a successful self. If she does not connect, her sense is of an unsuccessful self," says Dr. Brizendine.

This makes it pretty clear why the female race spends so much of our time trying to be liked. The result, however, can be detrimental.

Feminist writer Jessica Valenti explored this dilemma in a 2012 essay in The Nation titled, "She Who Dies with the Most 'Likes' Wins?" In it, she discusses the countless hours she wasted arguing with people on the Internet, giving equal time to thoughtful and asinine commenters, all in an effort to show herself to be fair and open-minded. She laments over what she could have achieved if she had used that precious time for other purposes.

"Women adjust their behavior to be likeable and as a result have less power in the world," she said.

"Wanting to be liked means being a supporting character in your own life, using the cues of the actors around you to determine your next line rather than your own script. It means that your self-worth will always be tied to what someone else thinks about you, forever out of your control," says Jessica.

That's definitely not a place of power.

While we can't rewire our brains, we can stop the cultural pattern of demonizing and disparaging women's power by changing the direction of the conversation.

How do we do this?

5 Ways to Stop Bad Attitudes About Women in Power

This social change -- valuing, respecting and encouraging women's power -- can only come about when we women speak up and stand up for ourselves and what we believe in, and support our sisters and daughters in doing the same. All the while, cheering each other on for being opinionated, outspoken, assertive and ambitious.

It is up to us to find our voice. Trust our own authority. And stand up for what we believe in. That is how we create change.

Tabby Biddle, M.S.Ed., is a women's rights advocate, writer and leadership coach, specializing in helping women find their voice. She is the author of the #1 Amazon Bestseller, Find Your Voice: A Woman's Call to Action, now available in paperback. Get your copy here.