This past week my toddler was sick, and life seemed to stand still (even though he, of course, would not). Caring for a sick toddler is a unique challenge that would drive even the likes of Florence Nightingale insane. In the midst of restraining tears and the desire to stalk your kid's pediatrician, you have to chase a toddler with a runny nose and a thermometer sticking out of his armpit. It's emotionally and physically exhausting.

While my kids have had their share of illnesses, this was one of the longer bouts my son has experienced. Playing nursemaid, I learned a lot about how to care for my ailing toddler.

1. Keep him off the hard stuff. To control my son's fever, we followed the doctor's advice to give him children's Advil every 6-8 hours. For some reason, he took an intense liking to this medication, immediately demanding upon waking, "Give me my medicine!" Worried that he was turning into a junkie, we kept the hard stuff out of sight. And yet the thick, red liquid beckoned to him, filling his dreams, consuming his waking thoughts. Now that he's better, we're still watching for signs of withdrawal...

2. Gear up for Thomas the Train. I like Thomas the Train as much as the next mom (translation, not at all). I suspect the writers were actually designing a drinking game involving shots every time someone declared Thomas to be "a really useful engine." However, when it's the only thing that will get my sick toddler to sit still for five minutes, then I'm all for a marathon of Thomas, Percy, and those other functional engines. Hey, anything for my little guy... and a few moments of quiet.

3. Chicken soup for the soul... but not for his tummy. When my son was sick I stocked up on so many cans of soup, it looked like we'd just held a food drive. My son, however, wanted none of it. The only thing I could get him to eat were crackers, occasionally smeared with peanut butter. The books may advise a certain diet, but when you're in the trenches, anything edible will do. I'm not ashamed that my son subsisted on Saltines for a week (although I'm a bit embarrassed by how many I consumed in sympathy).

4. Forced weight training. My son generally doesn't have time to sit and cuddle with Mommy -- he's too busy exploring every corner of his surroundings. But when he's sick, he wants nothing more than to be held and carried everywhere Mommy goes. It's like having another limb... that weighs over 30 pounds and shrieks like a howler monkey whenever I try to rest it on the couch. Thanks to the five pounds of muscle I gained last week, I'm ready to take on a major project, like sweeping under the couch. Or binging on ice cream, because, hey, I worked out all week.

5. Lovin', is what I got. And yet I don't mind carrying my son everywhere. Those moments of closeness, when he rests his little head on my shoulder, seeking comfort and reassurance, are precious to me. While I would do anything to make him well, I'm glad that I can hold him close and make him feel better, if only for a few peaceful moments. My little guy depends on me. It's my job to care for him in sickness and in health, and I'm not going to let him down.

I was hardly the picture of serenity when my toddler was sick. My daughter couldn't stop giggling watching Mommy pace back and forth after taking her brother's temperature. But somehow we all persevered -- Thomas the Train marathons and all. I'm not sure I was "a really useful" Mommy at all times, but I did my best to make my son feel safe, comforted, and loved. Because in the end, that's the best medicine Dr. Mommy can give. 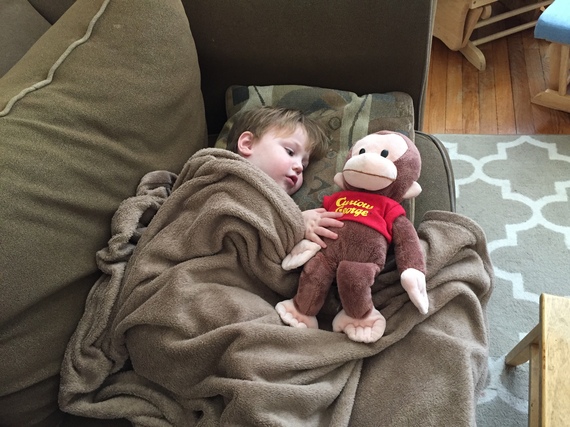 More:
Parentssick kidsparents-momsparents-having-a-baby
Newsletter Sign Up
Raise the kind of person you'd like to know
Subscribe to our parenting newsletter.
Successfully Subscribed!
Realness delivered to your inbox