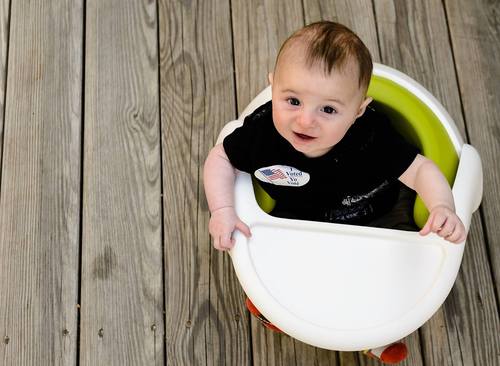 The Presidential election is just six months away and even young children have started to notice that political campaigns are in full effect. Weather you feel the Bern, Stand With Hillary, or think Trump can Make America Great Again, your children have probably picked up on the contentious nature of this campaign cycle.

It's impossible to shield young ears from political campaigns, but what they hear can be confusing. Politicians may treat each other in downright nasty ways and engage in name-calling and other behavior that we would not tolerate from our children - and the problem seems to be worse this year than it has been in previous years. So, how can parents talk to their children about contentious and mean-spirited political campaigns?

Dr. Craig Bach, Vice President of Education at The Goddard School, has some advice:

1) Focus on the child's interest. Provide opportunities for children to ask questions and tell you what specifically is bothering them. Focus the discussion on those things and make the conversation as child-focused as possible. If your child asks you about name-calling use the opportunity to talk about that issue at an age-appropriate level.

2) Limit exposure to the rough and tumble. Even though we cannot shield children completely, those on the campaign trail do not normally target anyone below 18. Thus, there are few, if any, good reasons to have your young children watch emotionally-charged political commercials or listen to such rhetoric. Find kid-friendly programming that is likely to be free of the rough and tumble and limit or avoid exposure to less-controlled programming.

3) Talk to children about political commercials. Even when parents try to avoid exposing their children to political ads, it is likely that their children will inadvertently hear one on the radio or see one TV, especially as the election draws closer. When your child does inevitably see or hear a political advertisement, talk to them about what the advertisement means, how they make them feel and why someone would want them to feel that way. Are the images happy, sad, scary or something else? You will find your children pick up the "game" pretty quickly, and it is a wonderful way to teach critical thinking. Or, you could preemptively show your child a political advertisement that you choose to discuss.

4) Tackle the rough stuff. If your children are worried about the "mean" messages they may have overheard during the political season, try to reduce their stress by focusing on how they would communicate or what messages they would create if they were in that same position. Remind them that in our system of government people disagree and sometimes become very emotional or passionate about their beliefs. Regardless of where your family falls on a certain issue the conversation can provide a great opportunity to talk to your children about the right we have in this country to discuss our opinions openly and freely, even when we disagree.

5) Focus on the positive. Find age-appropriate books on the political process and discuss the value and importance of the democratic system of government. There are many wonderful books on the topic for young readers, tweens, and teens. As you read with your children, ask them what they would do if they were president, what topics they would talk about on the campaign trail or what big issues are important to them. The idea is to put the conversation about politics within their frame of reference.

Deborah Johnson, from Annie and Aunt: Thoughts on Family Reading With Kids and a book buyer for Barston's Child Play, recommends these books for explaining the political process to kids, including the electoral college:

•Grace for President by Kelly S. DiPucchio
•Bad Kitty for President by Nick Bruel
•Where Do Presidents Come From?: And Other Presidential Stuff of Super Great Importance by Michael Townsend
Votes of Confidence: A Young Person's Guide to American Elections by Jeff Fleischer
•The Kid Who Ran for President by Dan Gutman 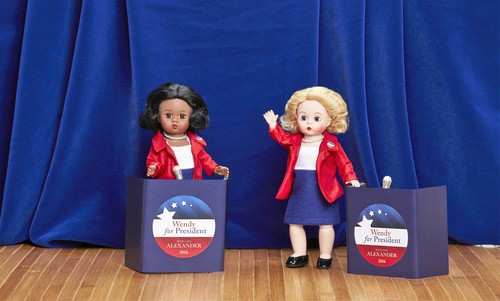 Teach children about political campaigns through books and dolls

My children also enjoy Duck for President by Doreen Cronin and I've found playing with Madame Alexander's new Wendy for President Doll (available with dark skin or blonde) complete with podium is a great resource to use to raise the topic of the campaign.

Whomever you are voting for in November, talk to your children about the campaign and bring them with you to vote on election day!