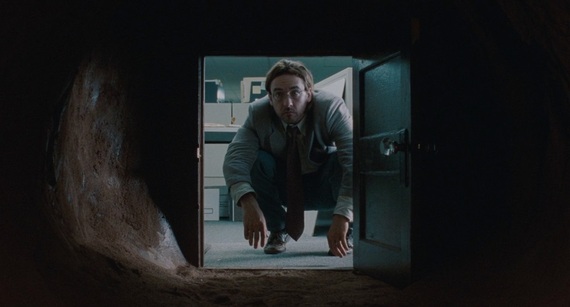 In the brilliant Spike Jonze film Being John Malcovich, John Cusack's Craig finds a portal into the mind of the title character.

"There's a tiny door in my office, Maxine. It's a portal and it takes you inside John Malkovich. You see the world through John Malkovich's eyes, then, after about fifteen minutes, you're spit out into a ditch on the side of The New Jersey Turnpike," he tells his girlfriend.

If only getting into the minds of our characters were that easy.

One of the most common elements of writing that writers struggle with most is writing believable characters that pop off of the page.

Believability has nothing to do with realism. Realism in film is often an oxymoron because most films and novels are fictional -- and even those that aren't usually take major creative liberties with the true stories that they depict in order to tell a more cinematic story within a couple hours of screen time.

Believability is about presenting a character in any given situation -- fantastical or not -- that seems real. Ellen Ripley in Alien and Aliens is obviously a character that is presented in a fictional scenario that clearly isn't real. However, had the scenario been real, we believe her as a character and we believe that such a character's actions and reactions would match what was presented by her in those two films.

A lesser version of that character would have her become some kind of action hero that feels no pain and experiences no range of emotions as she deals with these seemingly unstoppable aliens that are killing her friends, peers, and possibly her.

Writers must learn ways to be able to get into the minds of their characters. When that happens, the characters come to life.

Here are five techniques writers can use to get into the minds of their characters.

Much has been written about The Method in the realm of acting. We've seen actors like Marlon Brando, Robert De Niro, Al Pacino, Daniel Day-Lewis, and Christian Bale go to great lengths to truly become the characters that they represent. They physically change their bodies. They learn a language that their character speaks. They live in solitude to discover what it's like to waste away in prison. They walk the dark city streets to get a feel for what it would be like to be a killer.

This Method is something that all writers should explore -- at least on the surface. Actors are tasked with delivering a believable performance onscreen for all to see, thus they must dig a little deeper to portray the wide range of depth and emotions in what usually become Oscar-worthy performances. Writers can just touch the surface of any character type or situation that they put their characters in. If anything, their work is the door that is presented to the actors while the actors have the task of opening that door to explore further.

For Michael Mann's Collateral, Tom Cruise's preparation for his role had him disguising himself as a UPS driver in order to discover the feeling of having to blend in like his hitman character had to within the story.

Writers can take the same type of action to get into the mindsets of their characters. When I was developing my script One Shot -- which was eventually picked up by Lionsgate (thus far unproduced) -- about a Navy SEAL sniper, I wanted to get into the mindset of what it felt like to have that stature. I purchased a simple set of Navy shirts that had the SEAL emblem on it and wore them in the gym as I worked out. Having the utmost respect for those who serve, I would never claim to be something of that stature which I was not, however, I didn't have to. I just wore my ear buds and worked out.

Throughout those evening workouts, I could feel the eyes on me. The public respects men who serve and I surely could feel that respect with nods, eye contact, etc. I accompanied that feeling with my imagination of taking on that role and feeling as if I was the character I was writing. Those moments alone helped me to write a few scenes where the SEAL sniper was walking through a military base as soldiers looked on. And those moments provided the doorway that I needed into that character.

If you're writing a crime drama that involves detectives or police officers, go the distance and try to navigate yourself into a ride along. Jake Gyllenhaal and Michael Pena spent months on ride alongs with LAPD in preparation for End of Watch -- and it shows in their amazing performance. For writers, a single ride along could offer answers to scenes that require some form of authenticity. A simple discussion with detectives or police officers in their world could offer material for more character depth.

You would be very surprised how your perspective as a screenwriter can change if you step even partly into the shoes of your characters. It's the closest thing to finding a portal into their minds.

Research is key. Method writing is certainly part of that process, however, in this case we're talking less about getting into their shoes directly, and more about hearing and reading from real life people that have been in those positions or situations.

My research for One Shot lead me to the book and eventual HBO mini-series Generation Kill, which details a Marine Recon unit during the 2003 invasion of Iraq. It offered me a look into the relationships of brothers-at-arms. Many other books and interviews played a key part in that and I was never more proud when I connected with one of those men featured in Generation Kill -- Rudy Reyes, a former Marine Recon Sniper -- and was told during an amazing phone call with him after he read the script that I really captured the brotherhood of soldiers. That believability was a direct product of my research.

Research matters. Writers need to jump into the ocean -- books, movies, documentaries, etc. --of whatever world, topic, or character type that they are writing.

Personal interviews are key as well. Find police officers, doctors, soldiers, office managers, car salesmen, teachers, or whatever character type to interview. The material that you can get from them is so valuable by the time you sit down to write the script or novel. Anecdotes that they offer can turn into some amazing scenes. Personal ticks or traits that you see during their interviews can be applied to your characters.

Research feeds your brain. By no means does this mean that you need to use everything you find. Not at all. However, the way our brains work is beyond comprehension. If you feed your brain with information, it will subconsciously connect it with whatever applies -- in this case, your script or novel. You don't even need an extensive notebook of compiled research half of the time. If you immerse in your research, what matters will stick and what matters will always come to you in those moments of need.

Research helps with writer's block as well. If you get stuck somewhere in your writing, go back to your research. Watch similar movies, watch documentaries, read some books, etc.

The location you set your script or novel in is your canvas. That's where you lay down the foundation of your story and your characters. Having a sense for those locations and the atmospheres that they have will elevate your storytelling -- you can easily picture yourself as your character in those settings.

It's easy to say, "Well, I can't go off and climb a mountain because I'm writing a script about climbing mountains." However, you can just as easily find something close to that experience. And if you can't, then you revert to your research and use the many beautiful and well shot documentaries about mountain climbing and nearly any other location in the world.

Go the distance and do whatever you can to get yourself into those environments because the pay-off will be priceless in your writing. For One Shot, I was in Hawaii on vacation with family and learned that there was an elite sniper school on a base nearby. I utilized the internet, found the necessary phone numbers, and made a series of calls that eventually worked their way up the ladder of seniority until I had an official invite from the colonel that was running the base.

You've put yourself in your character’s shoes and surroundings. You've done the research. Now it's time to utilize that imagination of yours. This is where your characters are developed. This is where they grow from those seeds that you've been watering in your own mind.

You accomplish this by asking yourself questions.

"What would my character do in this situation?"

"What would hurt my character most?"

"How would my character react to this conflict?"

"How would my character shine in this scenario?"

These are just a few of the many questions you should be asking yourself now that you've gotten into the mind of your character a little more. The answers that you come up with using that imagination -- fueled by the information you've picked up about your character along the way -- are your story.

Only when you truly know your characters can you possibly write about how they react to any given situation or conflict that you throw at them. That's what makes cinematic characters believable.

This comes full circle to where Method Writing originates from -- Method Acting. When you're creating dialogue for your character in a screenplay, which is driven by what you've learned about the mindset of those characters, you need to do a little acting yourself.

No different than method writing, writers don't need to go all out in that respect. Just touch the surface of how the dialogue is delivered. You'll quickly find what works and what doesn't. You'll find those necessary rhythms, beats, and timing.

Written words aren't always cinematic when actors are asked to deliver them, so you need to become an actor yourself. Even if you're writing a novel, this process can help you write excellent dialogue.

It was Harrison Ford who said to George Lucas during the production of Star Wars, "George, you can type this shit, but you can't say it!" Don’t be caught in that situation as a writer.

When you utilize these five techniques for getting into the mind of your characters, you can rest assured that they will come to life on that page. The work you've done will be very evident. The story will be stronger. The script will be more castable in the eyes of executives, producers, representation, and talent.

It's the next best thing than finding a secret portal into their minds.