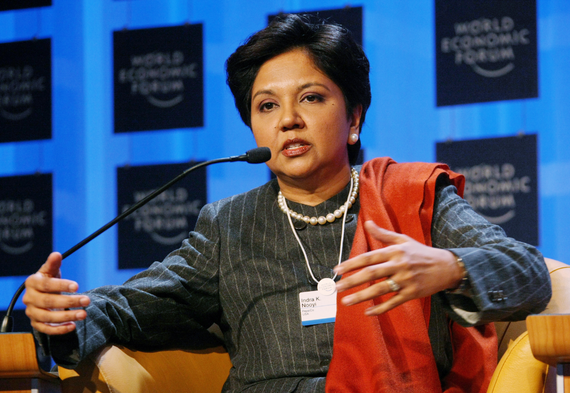 While men still enjoy a bigger piece of the corporate pie, things are starting to shift.

Twenty-three women now head Fortune 500 companies and hundreds more are in CXO positions, a definite sign of progress. But despite this achievement, 34% of the population still believes that men are better at assessing risk than women are.

Is one gender truly superior to the other in the boardroom? Or are company culture and regulation still holding women back from reaching their true potential?

Let's take a look at five of the most compelling female CxOs from high-profile companies:

Indra Nooyi is the leader of PepsiCo, a company with a current market cap over $150 billion. Much like its rival, Coca-Cola, Pepsi has been forced to make some tough decisions in recent years thanks to a more health-conscious America.

Nooyi chose to embrace this, producing healthier alternatives alongside the classics. This caused a rift in the company; Nelson Peltz attempted to tear the company in half and people thought Nooyi's days as CEO were numbered.

But they weren't. In fact, the last 10 years she's been CEO, Pepsi's stock has risen.

A great example is how Nooyi revamped vending machines to not only be healthier, but keep user-friendly design in mind. Interactive screens, the ability to mix products and save a user profile has turned the archaic vending machine an addictive, modern innovation.

This shouldn't be surprising -research has shown that female executives may drive more innovation and growth than their male peers because they have better empathy, which helps them hone in on customer pain points.

Sheryl Sandberg became a billionaire in 2014, making her one of the highest-paid COOs in the nation. Given her incredibly impressive history, this isn't too surprising.

After working for the World Bank, the Clinton Administration, and Google, she became Facebook's COO in 2008. Since joining, she's helped the company of "college kids" stay organized and growth-oriented. Facebook had $777 million in revenue in 2009 and $1.79 billion in 2015.

Sandberg, a single mother, reveals the secrets to her success in Lean In: Women, Work, and the Will to Lead, which has sold over 1 million copies. One of the keys to her success? Her willingness to take on any role, as long as it's mission critical. "If you're offered a seat on a rocket ship, don't ask what seat."

But another secret to her success lies in her COO role: research has shown that women may be better at meeting employee's essential workplace requirements.

Mary Barra came into GM right before one of the largest crises in its history. Her first task as CEO was to recall 2.5 million vehicles and pay $900 million to settle criminal charges, due to a fault that could stop the car's airbags from deploying.

This was one of those make-or-break-decisions that could define the CEO (and the company) going forward. Rather than take it out on middle management, Barra took full responsibility. And she was praised for it. "We're going to do the right thing, even if it's hard," she said in a recent interview.

By handling the situation with leadership and grace, Barra is now moving the company forward on a far less bumpy road, recently investing $500 million in Lyft and beginning research into self-driving cars. This year, she helped usher in the 2017 Chevy Bolt EV, which put GM ahead of Tesla in the race to engineer the first affordable electric car with a range of 200 miles.

The secret to Barra's success may lie in her savvy internal networking at GM. A lifer, she started working for GM at the age of 18 and has been in just about every role at least once. And it's paid off. Her $16.2 million pay package in 2015 was 80% higher than that of her predecessor, Dan Akerson.

Ursula M. Burns has the distinction of being the first black woman in America to run an S&P 500 company, which is even more impressive because she started with Xerox over three decades prior as an intern.

Burns may have single-handedly saved the company with her acquisition of CEO Affiliated Computer Services. This $6.4 billion purchase-derided by her critics-now produces more revenue than all of Xerox's original copier services combined. This move was the most recent headliner in Burns' attempt to rebrand Xerox as a services company, and it's working. In 2015, she helped generate $18 billion in revenue.

After six years in the CEO seat, Burns will step down when Xerox splits into two different companies. According to Burns, her success in the face of overwhelming odds ("I was black. I was a girl. And I was poor.") can be attributed to following the same mantra that Sandberg did at Facebook: the courage to lean in and sit at the table.

If women CEOs are unicorns, Irene Rosenfeld may well be a Pegasus. Not only has her tenure at Kraft resulted in a centuries-old company spinning off into two entities (Modelez International and Kraft Foods), Rosenfeld masterminded the split. And she did so while weathering criticism from Warren Buffett, one of Kraft's biggest investors.

The bold move paid off. Kraft Foods was eventually acquired by Kraft Heinz, which has a market cap of $75 billion. Meanwhile, Rosenfeld's baby, Mondelez International, enjoyed $33.2 billion in revenue in 2014. Compare that to Kraft's last fiscal year before the spit: $18.22 billion in 2012. Somehow, Rosenfeld managed to nearly double the revenue of Kraft's spiritual successor in only two years.

Rosenfeld's aggressive barnstorming at Kraft ruffled a lot of feathers, but it also paved the way for massive, unprecedented success at a company that hadn't done much to change the status quo in many years.

A new generation of leadership

Not only are women leaders just as capable of deciding between stressful, risky choices, they're much more likely to be altruistic and empathetic than men. As we've seen, many female CxOs make fantastic leadership decisions, even in the face of overwhelming criticism.

In 2016, only 5% of the nation's top CEO roles belong to women. Hopefully, with the success of trendsetting leaders like Nooyi, Sandberg, Barra, Burns, and Rosenfeld, we will see more women "lean in" to executive roles by 2040, when a third of all CEO seats may be occupied by women.