What is it about saying "five years" that makes it seem like you've reached a milestone? Reunions are in five-year increments, anniversaries seem more important on the fives, decisions just seem more finalized if they've reached a five-year mark.

"Grief doesn't have a milestone," my friend Wendy told me. Amen to that.

Things happen in our lives for myriad of reasons. It's only after the fact, sometimes years later, that we realize it. It was hard to find those reasons when I was doubled over in pain of heartache five years ago. I simply could not believe that my mother wasn't with me anymore. The emptiness was excruciating.

Grief is paralyzing, my friend Laura succinctly put it once. I had those days, wracked with guilt when I donated her clothes to a worthy charity, sitting on the couch, zoning out, holding onto a favorite pillow. It simply didn't sink in. My therapy was talking to friends and going through my treasure trove of e-mails and letters from her. I've got letters from college days, from Italy sojourns, my first job, second job and New York. My mom was a letter-writer and I'm very glad that she was. Put together, they're a record of our lives.

I have found in myself a strength that I never knew existed. I know that sounds like a cliché - you don't realize how strong you are until you need to be. I have to attribute that to my mom. My mom arrived in America from Italy when she was four years old. She came though Ellis Island with her mother and brother, my Uncle Charlie. Her father and older brother had been in America for two years by the time she arrived. For most of the next eight years, her mother was ill and she died when my mom was 12. So here she was, trying to assimilate in a new country, and she lost her mother.

But she came through it, taking care of things that needed to be taken care of, excelled at school, learned to write shorthand, learned how to play Bridge, was a fabulous cook, enjoyed a career.

So when I think about how much it hurts when I can't pick up the phone and laugh with her and discuss a recipe that Giada made or how Gail Collins always gets it right, I realize I'm pretty lucky. She was with me for 47 years.

The strength that she instilled in me got me through the sale of her house and writing about her has actually been therapeutic. I'm quasi-starting over and have rediscovered my love of Italy, not that it was ever really gone. Just lying in wait. Everything I do now is all about my quest to live and work in Italy. I feel like I've come full circle.

The first time I lived in Italy was 1986, in Rome. Mom came to see me at Christmas and then we went to Assisi, San Gimignano and Siena. We loved Siena. I still remember our wonderful dinner at a place called Medio Evo, complete with a bottle of Chianti Classico. I also remember our waiter tried to get away with overcharging us. Mom was having none of that!

I bought a poster of the Palio, the city's famous horse race, and it's currently framed and hanging in my apartment. Fast forward 30 years and I'm back in Siena in late 2015, I fall in love all over again and have finalized my plans to return this summer.

When my mom went back to work, as a Kelly Girl, she faced challenges and took them head-on, including dealing with a conniving boss at her first job. She eventually flourished and retired after a successful career at Procter and Gamble.

I had so much respect for her. She guided me through many rough patches and always had the right words to say; she could always find a solution. We were a good team. And I even forgave her for all those times she made me go to bed with pin curls and plastic curlers in my hair. (You try it!)

So here I am, five years later. It still hurts. I still cry. But then I think about how she'd likely be very happy about all the new things I've done in the past five years and how I've decided to follow the Italy dream. As I wrote in 2012, to stop reaching for a goal would be a disservice to her.

And I often read and re-read a few of her credos: "Remember: success equals effort. I hope you do what you need to do for yourself. Don't be scared. I'm right here to help."

"Believe in yourself. I believe in you. Get that 'get-up-and-go' spirit back. You have had a good year so far because you took risks and were willing to work hard. Let it continue."

And my favorite message from 1996: "Have a good weekend and stop worrying. Be positive. Be professional. Be good. I'm always thinking about you. Don't worry. Things will work out one way or another. Love, Mom." 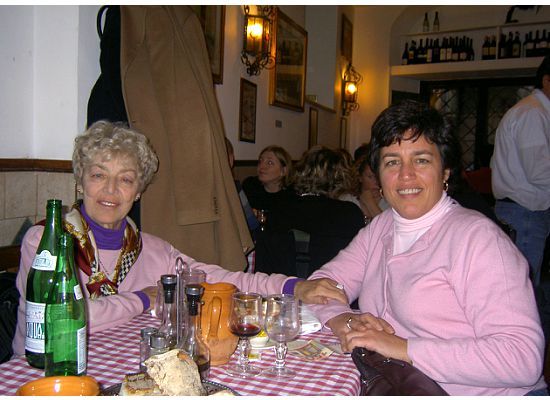