Much ink has been spilled over the January 25 revolution that shook Egypt in 2011. Now five years later, everyone is still analyzing what went wrong, what could have been done and what needs to happen in the future. Many of the Egyptian youth that took part in the 18 days of demonstrations, myself included, are frustrated and feel cheated. We yearn for that same hope and optimism we felt the night of February 11 when Hosni Mubarak stepped down.

My last day in Tahrir Square was February 10, the day before Mubarak's ouster. My parents decided to accompany me and this was a major achievement. They were paranoid and utterly fearful of all the rumors they heard, courtesy of Egypt's state-run media, about the atrocities and "sins" taking place in the square. Nevertheless, they supported the downfall of the regime, albeit from the luxury of their couches  --  Hezb el-Kanaba (The Couch Party).

"Yes, removing an authoritative dictator who ruled for nearly 30 years was indeed a challenge and a major feat. However, as the past five years have shown us, we clearly were not prepared for what came next."

My mother clutched onto the hood of my sweatshirt, afraid I would be kidnapped -- or worse. Minute-by-minute, they become more relaxed and enjoyed the warm and festive environment in Tahrir. Abdel Halim Hafiz's songs rang in the square through the speakers as we walked under a life-size effigy of a hanging Mubarak. Street vendors offered us tea and sweet potatoes. This was no surprise to us, Egyptians have a knack for transforming any situation into a celebration and an opportunity to make money.

Ten minutes later, it began to rain -- a rarity in Cairo. Rain is considered a blessing in Islam and a special supplication is made by Muslims once it occurs. At that moment, I could see everyone around us in the square pause and whisper, asking God for what we all wanted --  an end to Mubarak's reign. The next day, our prayers were answered. 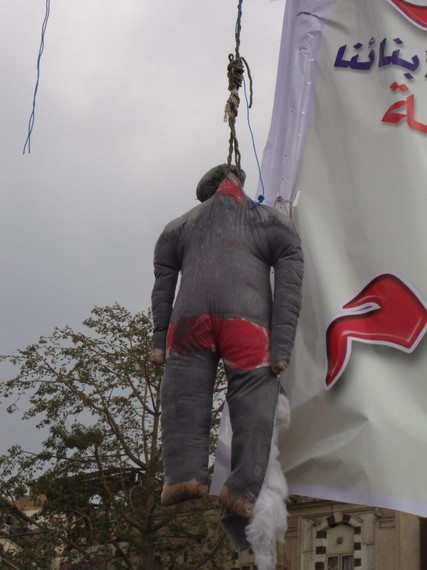 While I would like nothing more today than a repeat of the events in 2011, it occurred to me that removing a dictator is not always the solution. It will not provide a panacea for all of Egypt's problems as we naively anticipated would happen the morning of February 12. Yes, removing an authoritative dictator who ruled for nearly 30 years was indeed a challenge and a major feat. However, as the past five years have shown us, we clearly were not prepared for what came next.

I remember in the weeks following Mubarak's ouster, many were adamant in their resistance to corruption. My friends told me stories, with smiles on their faces, about how they could no longer bribe their way out of a traffic ticket because police officers refused. It was post-revolution fervor, but it was short-lived. Corruption runs deep in Egypt and removing Mubarak was not going to solve that or any of the country's wide array of grandiose problems. We learned that the hard way.

Last year, I attended a talk given by Amr Hamzawy. He discussed six mistakes made in the aftermath of the revolution and among them was the lack of any viable liberal opposition. Hamzawy accurately pointed out, "the opposition failed to offer its own road maps -- and has yet to shape a viable alternative government." Instead, the topic among Egyptians seemed to always shift to democracy.

"Egypt's "deep state" did not disappear with Mubarak and his regime, but merely reemerged with renewed vigor under its current president, Abdel Fattah el-Sisi."

Too many times I heard discussions on whether Egypt is ready for, or if our society is compatible with, democracy. I always thought those were the wrong questions to ask. Rather, how much time will it take, what are the steps necessary to achieve this, are we willing to invest the effort, preparation, messiness, uncertainty and trials and errors associated with this style of governance and -- more importantly -- do we even want democracy to begin with?

Egypt's "deep state" did not disappear with Mubarak and his regime, but merely reemerged with renewed vigor under its current president, Abdel Fattah el-Sisi. Sisi has become the face of counterrevolution and a neo-Mubarak dictator ushering in a phase of neo-authoritarianism in Egypt. But before the Egyptian people can think about or plan his removal, there needs to be political preparedness and viable alternatives. Otherwise, the country will find itself succumbing to a strongman in uniform once again.

Many Egyptians will recall a week into the protests people were already growing restless and anxious to resume their day-to-day activities. I remember thinking: "If, as a country, we are not patient enough to last more than one week, then how will we ever achieve our end goal?" The changes we set out to accomplish in 2011 were not going to occur overnight ,  they require time, patience and hard work. Five years later, we are still trying to figure out how to finish what we started.