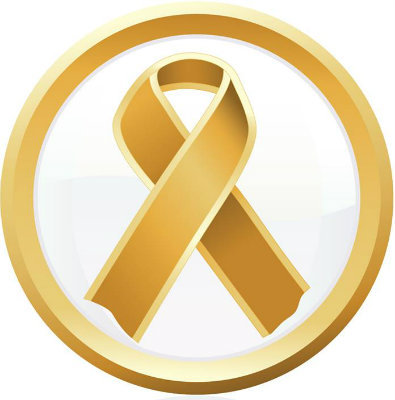 September is Childhood Cancer Awareness month and our color is gold. We gild our profile pictures and status updates with it in solidarity, driven to highlight the tiny warriors in our lives--the survivors, those still fighting and the dear ones we've lost.

The stories vary from child to child, family to family, connecting us from the moment we get that first, terrible diagnosis. They usually start with the words, "Your child has cancer."

Ours started with the word "tumor."

My family was initiated into this club five Septembers ago. Back then, I thought I was aware. I thought donating to charities like Make A Wish and St. Jude made me aware. I thought that since my younger daughter (I'll call her E) had been through three surgeries by the age of seven for her cleft lip and palate, I was aware. Kids get sick, sometimes really sick. I've had to stay with my child in the hospital. I get it.

But I didn't get it.

This month you'll see many statistics laid out neatly in black text. You can read about them here, or here, or here.

Statistics don't tell the whole story, so what I want to do is make you aware--just a little bit--of what it's like to watch your child live with this devastating illness.

It's important to understand that cancer isn't just one disease. Its many forms and iterations are as unique as the children who get it. Cancer plays out differently depending on the age of the child, the type of cancer, the stage of cancer and the prevalence of the disease. That last one is important, because rare cancers tend to have much lower survival rates than cancers with clinically proven protocols.

The disease trajectory for each child varies greatly. Some children get treatment, go into remission and grow up. Some children die within days, weeks or months of diagnosis. Some children, like my older daughter (I'll call her A), struggle with cancer for years before being categorized as terminal.

If you think the words, "Your child has cancer" are bad, try getting out of bed after your child's oncologist says, "There's nothing more we can do."

For A, the disease has become the defining characteristic of her childhood. Diagnosed at 11, she was just beginning adolescence when we discovered the tumor. She has clear memories of a time before she was sick--memories that fade with each passing year--but these formative adolescent years are dominated by her illness.

How it lingers. How it forces you to change your life. How it feels never ending, intractable, unyielding in its demands--that's something I didn't get before A's diagnosis. My limited experience with childhood cancer came from the brief glimpses I'd seen on the news or third hand, from people who posted fundraisers on social media. People rally around children who are newly diagnosed, they support the family with prayers, money, meals and more through the intense months of initial treatment, hospitalization and recovery.

Our children's stories float into your awareness briefly, then swirl away again. I understand this. It's so hard to live in this state of constant sorrow, of near desperation. Why would anyone want to stay here longer than they have to?

As we embark on our fifth year of A's illness, it strikes me (yet again) how little I was aware of the hardship aspect of a disease that lasts for years. It's not one trauma, it's many. There's no getting over this because it's still happening. We're still living with the reality that we're probably going to lose her--that each season, each holiday, each birthday and all the small moments in between might be her last.

"This sucks, but I don't want it to end," my husband said the other day.

My daughter had a particularly rough August. She started a new oral chemotherapy medication--a last hope kind of thing--in combination with a medication she was already taking.

The two potent drugs are causing profound anemia to the extent that she needed a blood transfusion during the first week of August. She might need another one soon. Because her body is so depleted, she got strep throat and has been sick for weeks. Her mouth hurts from sores (a side effect of the medication). She's tired, weak, and frustrated. She wants to travel, but we can't go far. She wants to see Iceland, Thailand, San Francisco, The Grand Canyon and so much more, but we have to stay in New York, close to her doctors and to our support system.

I've never been an incredibly ambitious person. But now I'm finding myself envious of those with the means to travel. I gaze out my window and fantasize about booking trips with a private nurse at our side, sitting in first class so my daughter is comfortable, and taking her wherever she wants to go.

We're in limbo and limbo is lonely. We can't plan, can't talk about the future, can only watch through the lens of social media as other families teach their kids to drive, send them off to college, walk them down the aisle...

Childhood cancer is holding us all hostage.

We live differently, but we haven't stopped living. My daughter still goes to school. She's still learning the guitar, going to parties, and going out with her friends.

Gold ribbons have an entirely new meaning for me these days--they are a reminder to cherish the moments and to share our children's stories.

My kids, now 15 and 12, have spent the long summer days together painting, swimming, and playing video games. This is a course correction for them. A few years ago, all they did was fight. A few months ago, E wouldn't come out of her room where she preferred the companionship of her computer and her sketchbook to her big sister.

The joy in watching my girls reconnect is overshadowed by the reality of this disease, but I'll take what I can get.

More:
Parenting Parentschildhood cancerTeenspediatric cancer
Newsletter Sign Up
Raise the kind of person you'd like to know
Subscribe to our parenting newsletter.
Successfully Subscribed!
Realness delivered to your inbox