We can't imagine any argument over a burger made from ground beef AND bacon, other than, Why haven't I tasted this yet. Right?

The bacon brouhaha began after Crain's Detroit Business reported that the stadium catering company that provides food for Comerica Park, home of the Detroit Tigers, served up one tasty burger at a recent playoff game. Dubbed the "50/50 Burger," the sandwich from Delaware North Sportservice is a carnivorous marriage of ground smoked bacon and ground chuck. This hefty hamburger comes topped with an onion ring, barbecue sauce and more strips of smoked bacon layered on top.

But the news report stirred Slater's, a California restaurant mini-chain, to call foul on the CoPa burger. Slater's already has a ground bacon/ground beef explosion of a burger, which they call -- you guessed it -- the "50/50 Burger." 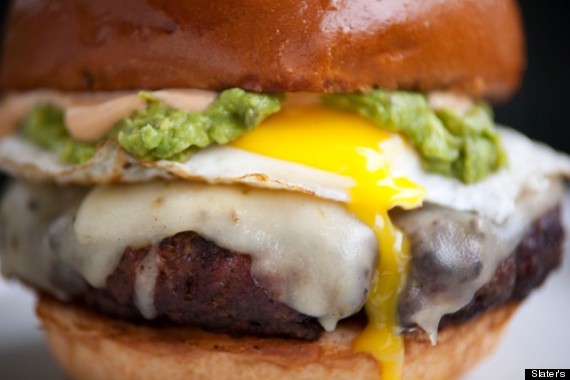 The Slater's 50-50 burger is a hefty half-pound of ground smoked bacon and chuck, lovingly topped with sunny-side up egg, avocado mash, pepperjack cheese and chipotle adobo mayo. It's devoured on a white brioche bun. Photo courtesy of Slater's.

"I created the "50/50 Burger" for my buddies after we were hungover at a San Diego Chargers tailgate one morning and we were all craving bacon," Scott Slater, founder and CEO of Slater's 50/50, told The Huffington Post in an email. He said he began by throwing slices of bacon on the grill, but it was messy and the bacon caught fire. He then moved onto making patties out of 100 percent ground bacon, but those caught fire, as well.

"So I started trying different ratios of ground bacon and ground beef, trying to achieve something that would hold up on the grill, but more importantly deliver the awesomeness that is the flavor of bacon, but not in a traditional "bacon burger" way," he continued. "Once I struck the 50 percent balance of ground bacon and ground beef, I knew we had a game-changing combination."

Slater's says the company has trademarked the "50/50 Burger" name. Their signature 50/50 burger is weighed after cooking, so you know it's a full half-pound of meaty goodness. It comes topped with a sunny-side up egg, avocado mash, pepperjack cheese and chipotle adobo mayo on a white brioche bun.

The California restaurant chain, which has opened six locations since 2009 and is expanding nationwide, wants Comerica Park to stop selling the stadium's version of the 50/50 burger, citing "reputation concerns and market confusion."

"We have reached out to the concessionaire and have asked them to permanently stop all use of the registered trademark "50/50 Burger" or any confusingly similar variations, including no longer serving a 50 percent ground bacon, 50 percent ground beef burger," the statement read.

Delaware Sportservice told The Huffington Post saying that while they plan to change the name, they won't stop selling the bacon/beef burger at Detroit Tigers games. 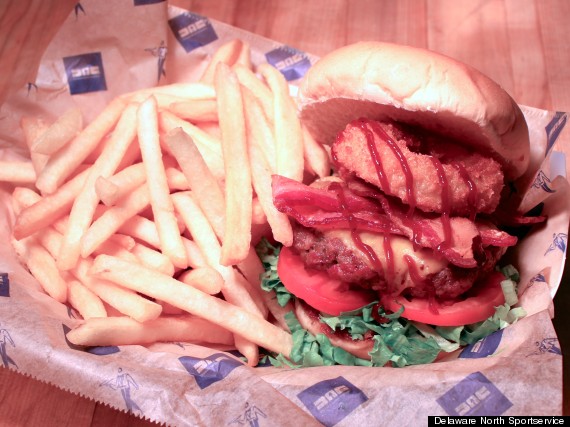 The Delaware North Sportservice concessionaire debuted their own "50/50 burger" at Comerica Park. It's a half-bacon, half-ground chuck patty topped with onion ring, barbecue sauce and strips of smoked bacon.

"When our chef created the burger for the postseason, we were unaware of Slater's trademark," Victoria Hong, director of corporate communications for Delaware SportsService, said in an email. "As soon as we were made aware of it, we immediately pulled the 50/50 name."

But Hong pointed out that their 50/50 burger's toppings show that the Slater's sandwich bears "no similarities to ours."

"We will continue selling the bacon burger in the postseason at Comerica Park," Hong said.

The statement from Slater's founder says that the "50/50 patty" is the foundation of the restaurant's concept.

"While we have a specific burger that we serve called the '50/50 Burger,' the patty itself is used in combination with many other menu items and toppings. It is the signature of our restaurant brand, and has earned us fans all over the country," owner Scott Slater said . 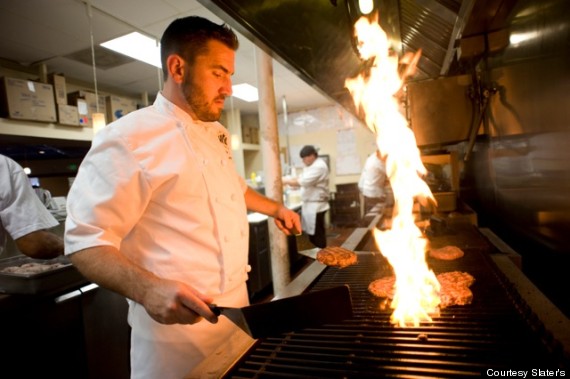 He said the company hopes to work out a resolution with the concessionaire, whom he acknowledged hadn't formally responded to Slater's complaint.

For all you bacon fans out there -- the 50/50 burger isn't even the baconiest bacon offering Slater's of California has put on its menu, which also includes delicious-sounding entrees like jalapeno mac & cheese and beer cheese fries.. Behold the B’ B’ B’ Bacon Burger: another 50/50 patty bearing bacon American cheese, sunny-side up egg, thick-cut bacon and bacon island dressing on a bacon pretzel bun. 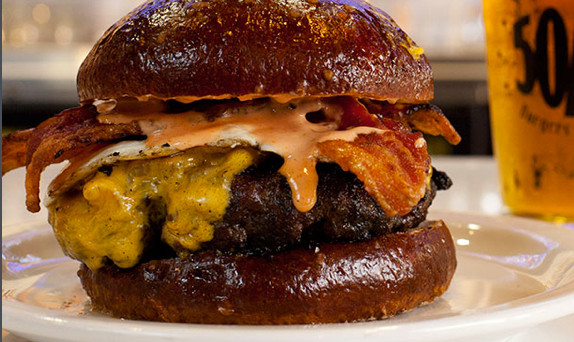 The Slater's B' B' B' Bacon Burger is a bacon-lover's dream. Behold the 50/50 patty bearing bacon American cheese, sunny-side up egg, thick-cut bacon and bacon island dressing on a bacon pretzel bun. Courtesy of Slater's.