Obama will speak during the "Let Freedom Ring and Call to Action" commemoration on the steps of Washington's Lincoln Memorial, the site of King's address on Aug. 28, 1963, the White House said.

Other speakers include former Presidents Jimmy Carter and Bill Clinton. The ceremony will follow an interfaith service at Shiloh Baptist Church in Washington, organizers said.

The speech by Obama, the first black U.S. president, will come as almost half of Americans say much more needs to be done before the color-blind society that King envisioned is realized.

Obama said last week that the legacy of discrimination had left a persistent economic gap between blacks and whites, but that the civil rights movement's impulse for equality had spread to Hispanics, immigrants, gays and others.

"What's wonderful to watch is that ... each generation seems wiser in terms of wanting to treat people fairly and do the right thing and not discriminate," he told a Binghamton University audience in Vestal, New York. "That's a great victory that we should all be very proud of."

The Lincoln Memorial ceremony will include bell-ringing at 3 p.m. EDT (1900 GMT), 50 years to the minute after King ended his call for racial and economic justice with the words "let freedom ring."

About 50 communities or organizations around the United States have said they will ring bells. The Swiss city of Lutry and Tokyo are also taking part, said Atlanta's King Center, one of the event's organizers.

Other organizers include the National Action Network of civil rights leader and talk show host Al Sharpton, the Southern Christian Leadership Conference and the National Council of Churches.

A "Jobs and Justice" march before the event is expected to snarl traffic around the Mall, an open area stretching two miles (3.2 km) from the Capitol west to the Lincoln Memorial.

Obama's address will wrap up more than a week of Washington events marking the 50th anniversary of King's address. They included seminars, conferences and a march on Saturday that drew tens of thousands of people urging action on jobs, voting rights and gun violence.

"What we must do is we must give our young people dreams again," Sharpton told marchers.

King, a black clergyman and advocate of non-violence, was among six organizers of the 1963 "March on Washington for Jobs and Freedom," where he made his address.

King's address is credited with helping spur passage of the landmark Civil Rights Act of 1964 and the Voting Rights Act the following year. A white prison escapee assassinated the Nobel Peace Prize winner in 1968. (Reporting by Ian Simpson; Editing by Scott Malone and Leslie Adler)

Black Voices March On Washington Martin Luther King Jr. I Have A Dream

On 50 Anniversary Of Martin Luther King's 'Dream' Speech, Bells To Ring For Freedom
1963 March On Washington 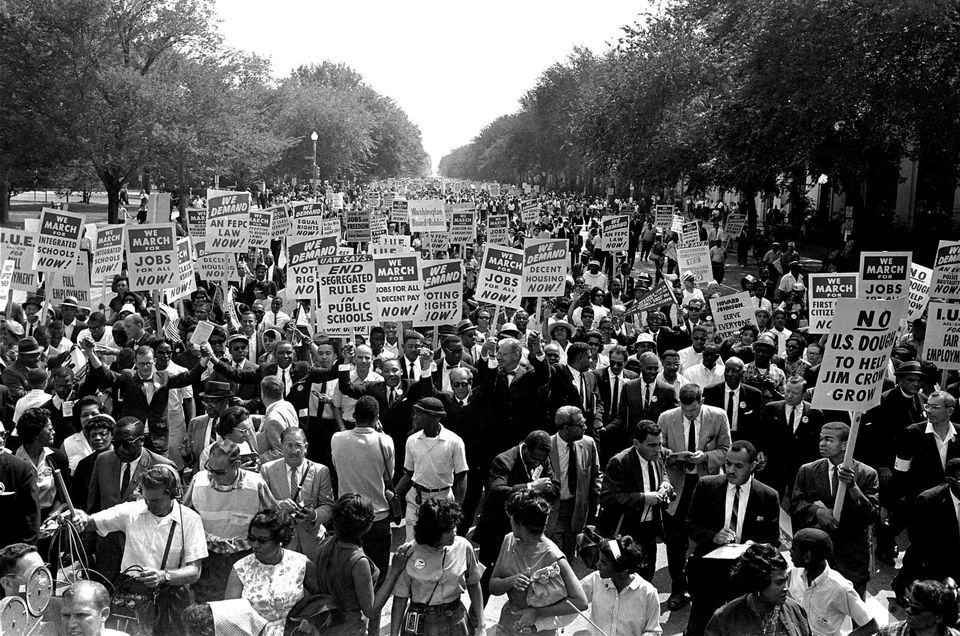