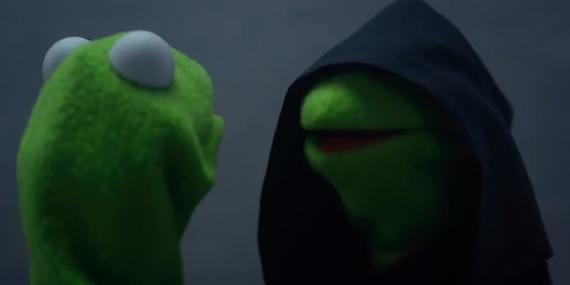 There's no shortage of memes that Kermit the Frog has helped inspire. While the most famous one is arguably a picture of him sipping some tea which inadvertently spun into the Tea Lizard debacle, a new Kermit meme has taken the internet by storm. Evil Kermit and his villainous temptations have spread through online culture, memorializing the Muppet once more through internet jokes and sparking a slew of remixes.

The scene on which Evil Kermit is based comes from Muppets Most Wanted, the 2014 musical comedy starring Kermit and company. In the movie, Kermit is approached by his evil doppelgänger Constantine who's dressed in a dark cloak, just like a Sith Lord from Star Wars. Within the film's context, it's a look-a-like of the protagonist. But in the meme, it's as if your evil side tells you to do something you know you shouldn't do.

Twitter user @aaannnnyyyyaaaa looks to have started the viral phenomenon.

me: sees a fluffy dog
me to me: steal him pic.twitter.com/XuJFCBi7st

Here are the 50 best Evil Kermits, including notable spin-offs like Evil Miss Piggy:

Me: *sleeps late*
Me to me before class: Skip it pic.twitter.com/pJtNAwnOfq

Me: *sleeps late*
Me to me before class: Skip it pic.twitter.com/QdCLf221tI

48. But think of the staleness.

*Gets a piece of bread *

Me to me: "Now close it without the twist tie." pic.twitter.com/kn9bYAhMiQ

Me: *Reads well articulated 5 paragraph text message about how she feels.

Evil Me: *Picks two things out of paragraph 3 to address alone.* pic.twitter.com/yLvVWiJDEh

Me to me: but he just ordered fries so let's eat some of his food. pic.twitter.com/mBoQJdRdXy

Me to myself: ITS TIME FOR A NEW FOOD NIGGA. pic.twitter.com/sqoUsDBlEI

*every time I pass chick fil a*

me to me: you need it pic.twitter.com/MH9fU7qIEx

me: I'm going to be more social, go out with friends, and enjoy life

also me: alienate all your friends because they secretly hate you pic.twitter.com/EsALF0m9EW

42. For couples that always fight.

Me: he apologized. I should just say okay & let it go.

Other me: bring up that thing that pissed you off 3 weeks ago too. Finish him. pic.twitter.com/21Q06Qhxr4

me: you're not gonna eat all of that, just come back for more if you want, no more scoops

me to me: and another one pic.twitter.com/rxqlHllJ9G

40. What happened to trust?

Me: everything's going good. love my man
Me: go thru his phone pic.twitter.com/u7oWD1Iqrc

39. When guests are the worst.

ME: Damn she's out of paper towels.

ME to ME: Fam, look at those decorative towels hanging there though... pic.twitter.com/zNRN44GnAB

Me: *decides to eat healthier*
Me to me: order a pizza pic.twitter.com/p9qUSEL8Rw

Me: He hasn't texted back. That's fine. He's probably busy.

My mind: Tell him that b**** can have him. pic.twitter.com/oqEAb6lQ8E

Me: This is a cute pic I'm sure bae would like it

Other me: The timeline would like it way more pic.twitter.com/D8FWxlE1WI

34. Everyone's guilty of this.

Me: "I'm sure there's a logical explanation for this"

Me to me: "Overreact." pic.twitter.com/1WgwnDZpjs

Me: I know he's not cheating rn cause he's with me
Me to me: unless... a clone...? pic.twitter.com/4wVumHfNFu

31. The source of the worst hangovers.

Me: no more shots man I'm fucked up

Me to me: didn't know you was a bitch pic.twitter.com/Lel0CrMNSC

30. Who needs a gym membership.

Me at 5:30 AM: You've been pulling niggas with this same body for years pic.twitter.com/ezomxOybTB

29. When the fuckboi tendencies take over.

Me: "I really click with this girl, she's funny too. I'm not tryna mess this up"

Me to me: "dm her friend." pic.twitter.com/LumdohRNXo

"She's a really nice girl, I wanna see where this goes."

27. This is how procrastination happens.

me: damn, i have a lot of homework
me to me: no you don't pic.twitter.com/Bk2dmfPcoK

me: but thats none of my business
me to me: make it ur business pic.twitter.com/i0cwoK9Lh4

21. How to get away with everything.

17. Getting those rage clicks.

Inner me: But imagine how many
people it's gonna piss off. Send it. pic.twitter.com/U5B2n9RTSj

Me: "He a jerk and he dont treat me right"

Inner me: "He got a big dick, let him" pic.twitter.com/eWXZeB5XM6

12. Anything for a cheeseburger. 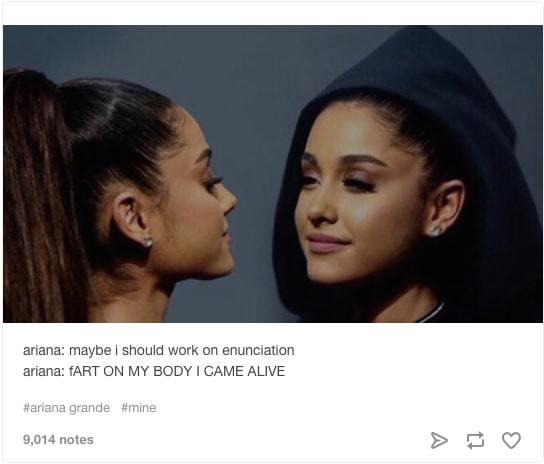 9. Now we know what was going through her head.

Me: I should sing live for once...my fans deserve it...
Me 2 me: No they dont. pic.twitter.com/tSc8DO6tZn 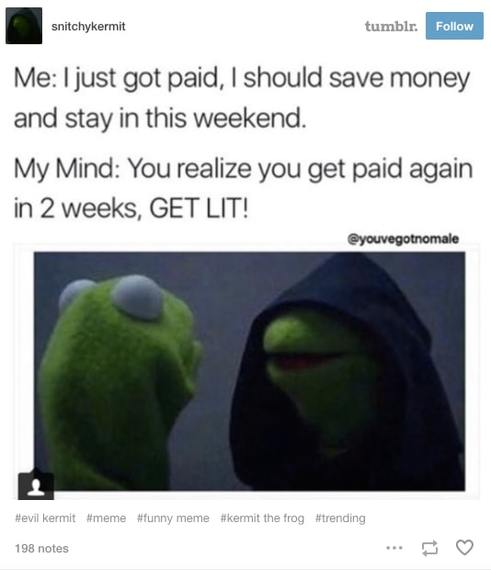 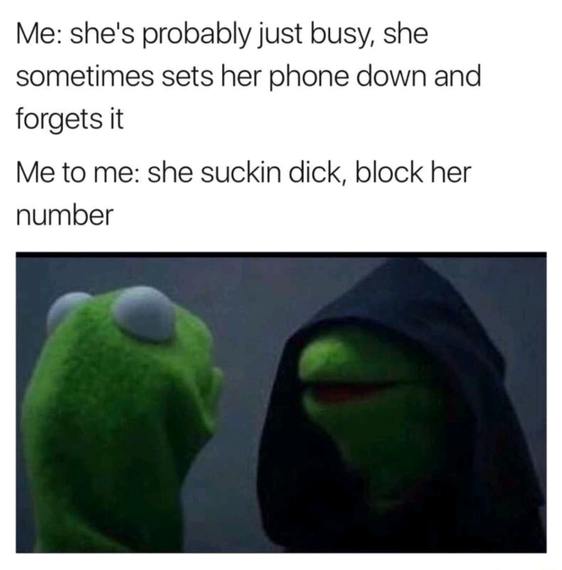 Me: The fam sleeping

Me: he's playing games just drop him
Inner me: so let's play a game. pic.twitter.com/0TPJ8799et

MORE FROM INVERSE:
It's a 'This is Fine' Dog Eat Dank Meme World
The Best Political Memes of 2016
Why Hate Couldn't Burst the Pepe Bubble
The 35 Best 'Pokémon Sun' and 'Moon' Memes
The 50 Best Joe Biden Memes