The beef is over: Oprah and 50 Cent have officially hugged it out.

The duo had quite the tete-a-tete on "Oprah's Next Chapter," hashing out a number of the conflicts that had led to a six-year feud. Chief among the TV queen's complaints was the rapper's criticism that Oprah was creating television for "white women as old as [his] grandmother" -- and the fact that he named a female dog after her.

"That was not a compliment," the TV host told Curtis Jackson. "I heard you had a bitch named Oprah!"

"At the time, I was just looking at the situation and I saw I was developing negative feelings for someone who doesn't even know me - and I gave it to the dog," he responded. 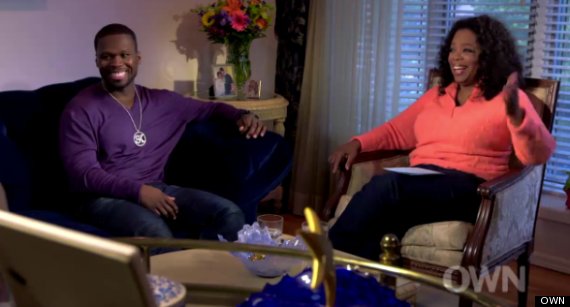 Oprah's famed crusade against the use of the N-word in rap also rubbed Jackson the wrong way, though they eventually agreed to disagree on the matter. "When you're actually using it with malice in your heart, you can feel the difference," Jackson said.

The interview -- which took place at his grandmother's house in Queens, where he was raised -- also revealed a softer side of Jackson. "I've had to be my grandmother's baby in the house and be more like what people perceive 50 Cent as outside," he said. "I'm not even allowed to curse around her."

Perhaps most surprising, however? 50 Cent is a pro-toenail painter. He revealed that he used to rub his grandmother's feet and paint her toenail's "like we in a nail shop." What a guy!

Watch some clips below. For more, head over to the Daily Mail.

1 / 25
Hilary Duff vs. Lindsay Lohan
Take two Disney starlets and one prepubescent popstar and you have a recipe for one of the most discussed celebrity feuds of the 2000s. Back in 2002, Aaron Carter reportedly broke up with or cheated on Hilary Duff, who he was dating for two years, to hook up with Lindsay Lohan. The 15-year-old Casanova then left Lohan to get back together with Duff. Though the girls should have been furious with Carter, they instead turned on each other. Their feud played out in the pages of magazines with both actresses <a href="http://today.msnbc.msn.com/id/8669450/ns/today-entertainment/t/lohan-says-duff-rebuffed-her-peace-attempt/" target="_hplink">taking shots at each other for years. </a> By 2007 the girls put their past behind them and made up. "We are both adults and whatever happened, happened when we were young," Duff <a href="http://www.people.com/people/article/0,,20033534,00.html" target="_hplink">told <em>People</em></a>. "It's over."
Getty