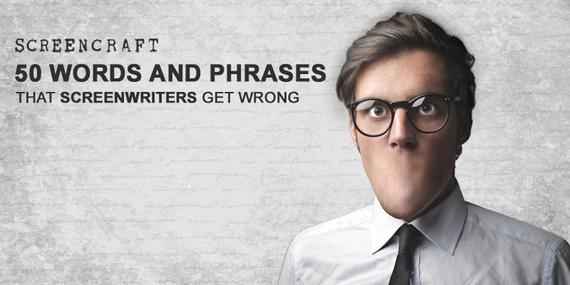 Whether it's through dialogue or scene description, writers all too often get some of the most commonly used English words and phrases wrong. Sure, it's true that most script readers and the powers that be within the film, television, and literary industries likely get them wrong as well, however, better safe than sorry.

Here's a comprehensive list of commonly used words and phrases that many writers get wrong in their screenplays and stories. Some are debatable to be sure, and others are listed to offer the origins of such common phrases or variations of them throughout the years.

Leeway means extra space or freedom. Leadway is not a word.

A rein is a leather strap used to control a horse. Free rein comes from equestrian terminology, meaning to give your horse freedom of motion. A reign is the period of time dominated by one ruling power or to possess power or authority over someone or something. While one could argue that giving someone the power or authority over something or someone applies, that’s not really what giving someone free rein is about. It’s about giving them some freedom in what they do.

3. One and the same NOT One in the same

One and the same means that two things are the same. One in the same makes no sense.

Exact is to demand and enforce while extract is to draw out or forth; to pull out; to remove forcibly from a fixed position, as by traction or suction, etc.

This is a figure of speech used to imply that a statement or other production is humorously or otherwise not seriously intended, and it should not be taken at face value. The phrase is taken from a facial expression attributed to the phrase. We all have a tongue and cheek. When our tongue is in our cheek, that can be the facial expression we’re showing when being humorous.

7. I couldn't care less NOT I could care less

The proper phrase is used to describe a situation in which people compete with each other for success in a cruel and selfish way. A “doggy-dog-world” would actually be a pretty cute and cuddly world, wouldn’t it?

Granite is a very hard, granular, crystalline, igneous rock consisting mainly of quartz, mica, and feldspar and often used as a building stone. I wouldn’t take much for “granite.”

Moot means subject to discussion; arguable, debatable, unsolved or impossible to solve while mute is not having the power of speech.

A Statute is a written law passed by a legislative body. A statue of limitations would be an interesting work of art.

Irregardless has been adopted as a common spoken word -- used hilariously in a famous SNL skit with Rachel Dratch -- but most literary and copy editors will get rid of it. One could argue that since screenwriters would use it for dialogue, it may be permissible, however, you may want to consider using regardless for those characters that are more articulate and educated.

This one is tricky, but technically pangs, which means a sudden sharp pain, is the proper usage.

Originally a biblical term, meaning a goat sent into the wilderness after the Jewish chief priest had symbolically laid the sins of the people upon it. Sadly, there is no goat escaping from anywhere.

The correct phrase means to put an end to something before it develops into something larger. The “bud” part alludes to destroying a flower bud before it blooms. Nobody is touching anyone’s butt.

16. Scot-Free NOT Scotch-Free or Scott-Free

If you get off scot free you avoid punishment for doing something that deserves punishment. It has nothing to do with Scotch tape or a guy named Scott.

Wreak means to cause or inflict. Reek means you smell. Wreck would be to destroy havoc.

18. Beck and call NOT Beckon call

If you are at someone’s beck and call, you respond immediately whether he or she beckons or calls.

If each was worse than the next, then you can tell the future and the future is not looking so bright.

20. By accident NOT On accident

Prepositions are difficult, but by is the correct usage.

If you go into a coffee shop and order an expresso, be ready for a few stares and giggles.

A memento is an object kept as a reminder or souvenir of a person or event. Momento is from the Spanish language meaning moment.

Conversating is an unofficial word that a lot of people use in place of the correct term, conversing.

24. Brothers-in-law NOT Brother-in-laws (same for sisters, mothers, and fathers)

You’re not pluralizing law, you’re speaking of more than one brother, sister, mother, or father.

To faze is to disturb, bother, or embarrass, while a phase is a stage or step.

Why would you want to be the first one there if you have to serve everyone else?

You’re sneaking a peek at someone with your eyes, not sneaking up the pointed top of a mountain.

Sure, one could argue that a seed could be planted deep, thus deep seeded would make sense in that context, however, deep seated simply refers to something being seated (in the sense fixed firmly in place) deeply in something else. Okay, English is sometimes weird.

Your and You're. New and Knew. To and Too. Their and They're. Its and It's. Then and Than. Effect and Affect. Cache and Cachet. Break and Brake. Principle and Principal. Breath and Breathe. Rain, reign, and rein. There, their, and they're. By, buy, and bye.

Know (not no) the differences. This is perhaps the most common example of errors that screenwriters get wrong.

The term uses the verb shoo, which means to urge something in a desired direction, usually by waving one's arms. This pertains to the idea that the person being shooed is such a lock that you can shoo him or her in without hesitation. No actual shoes are involved.

Bated means in great suspense; very anxiously or excitedly. The phrase has nothing to do with taunting someone or sticking a slimy worm to a fishing hook.

33. Peace of mind NOT Piece of mind

You don’t want anyone to give you an actual piece of their mind. That’s gross. You could argue that figuratively speaking, you could give someone a piece of your mind by sharing your thoughts, but all too often the usage of either version above (peace or piece) is meant to convey putting ones mind at ease. Piece of mind in that case would not apply.

Whet means to stimulate. To make your appetite wet makes no sense, unless you are referring to taste buds getting wet, which is a little too literal for our taste (see what we did there?).

Make do is short for make something do well enough.

By and large means for the most part or on the whole. The phrase is based on a nautical term from the late 17th century, which stems from the practice of sailing by (which means close to the line of the wind) or sailing large (which means with the wind on the quarter). These sailing techniques were sufficient to keep the ship heading in approximately the right direction, but they were not very accurate, hence the phrase meaning for the most part or on the whole.

37. Due Diligence NOT Do Diligence

Due Diligence is used as a noun, meaning the care that a reasonable person exercises to avoid harm to other persons or their property or research and analysis of a company or organization done in preparation for a business transaction.

Do diligence would be improper or lackluster grammar with Do as a verb and Diligence as a noun (meaning careful and persistent work or effort).

Pique means to stimulate. Peak, in this case, would mean that you’ve taken my interest to the highest of levels. Sure, they may sound the same to some with those definitions, however, the phrase is really about someone stimulating another’s interest.

39. Case in point NOT Case and point

Case in point is a noun meaning a relevant illustrative example.

The phrase originated with the custom of marking bar tabs and scores on a slate in pubs, often with chalk or something similar. Chock means a wedge or block placed against a wheel or rounded object, to prevent it from moving.

A suppository helps with hemorrhoids or constipation. A repository is a container that stores things.

To fall by the wayside means to fail to continue; give up. It has nothing to do with garbage or your waist line.

The extra “s” is unnecessary, but you could do worse as far as grammatical errors.

Ado suggests an interruption. Adieu is French for good-bye.

47. The spit and image NOT The spitting image

This is at least the correct original phrasing. The phrase spit and image is Biblical, referring to where God made Adam out of "spit and mud" in order to make him in his own image. No one or thing is spitting on anyone. However, the spitting image has been used more so in contemporary times.

49. On tenterhooks NOT On tender hooks

By the mid-18th century, the phrase “on tenterhooks” came to mean being in a state of tension, uneasiness, anxiety, or suspense. Tenterhooks are a sharp hooked nail used especially for fastening cloth on a tenter, which was originally a large wooden frame that was used as far back as the 14th century in the process of making woollen cloth. Tenterhooks are certainly not “tender.”

And major props to you if you work this lesser known phrase into your scripts without most readers having to look the term up.

Okay, we’re being picky here, but the original term is cardsharp. If you’re writing dialogue for a British character, when referencing professional card players or those that are excellent card players, cardsharp is the word to use. The American version eventually became card shark so feel free to use it because that’s how we say it in ‘Murica.

Some are more forgivable than others while many may slip through the cracks irregardless, er, regardless of how versed the reader or the powers that be are in grammar or vocabulary. While most writers may feel such mistakes pale -- not pail -- in comparison to striving for engaging concepts, story, and characters, it’s always good to be a master of the finer details as well.