Rarely do artists dead for nearly 50 years manage to continue to influence the music industry today. Sam Cooke, Eddie Cochran, Cole Porter, and so many more formidable musicians who died in the 1960's still sell music today, but few come close to the voracity of John Coltrane's music-selling ability. All at once, his music is spontaneous and calculated, permanent and ephemeral, and relaxing and intense. Few artists can list that on their resumes.

John Coltrane was a jazz musician and visionary for certain, but his musical catalogue delves far deeper than surface jazz. His organic proficiency in jazz fundamentals, music theory, and chord progression (to name very few) allowed him to take creative risks, to turn the genre on its head, and to experiment with his music. Today, doctorate students are still baffled when they try to recreate so much of Coltrane's work. Coltrane's level of craft mastery is what keeps his legacy at such an unattainable high -- we all want what can't have.

A Love Supreme, Coltrane's most critically-acclaimed and most awarded collection of work, was released in 1965, this year being 50 years since its release. Comprised of four movements entitled "Part I: Acknowledgement," "Part II: Resolution," "Part III: Pursuance," and "Part IV: Psalm," A Love Supreme is meant to be a spiritual experience from start to finish. The words "a love supreme" become a mantra toward the end of "Part I: Acknowledgement," repeated over and over until the track's end. A Love Supreme is confusing, hypnotic, erotic, and deeply emotional. The four-track masterpiece features John Coltrane exploring licks and motifs, which bring forward his almost religious connection with jazz that does not simply begin and end with A Love Supreme. To the contrary, his catalogue is riddled with tracks with titles like "Om," "Ascension," "Serenity," "Amen," and "Love."

What's astonishing is just how much John Coltrane's style inspires musicians so many years after his death. U2 mentions the album in their lyrics for "Angel of Harlem," Carlos Santana and John McLaughlin recorded A Love Supreme for a side project, and Gil Scott-Heron and Joni Mitchell sourced John Coltrane as immense inspiration for their respective art forms. Today, John Coltrane's great-nephew Steven Ellison, known more popularly as Flying Lotus, incorporates a substantial amount of jazz influence into his music. Flying Lotus is also cousins with acclaimed musician Ravi Coltrane, yet another angle from which the Coltrane legacy lives on. And just last week, Kendrick Lamar's To Pimp a Butterfly was released with impressive amounts of jazz woven into it, most noticeably in "For Free? (Interlude)." John Coltrane's work influenced his son Ravi Coltrane, who guided his cousin Flying Lotus, who worked with Kendrick Lamar, and here we are 50 years after John Coltrane's death with a new, exciting, and fresh reinterpretation of his work.

John Coltrane is worth much more than the sum of his parts. His work permeated the collective conscience of those concerned with disrupting the norm, with challenging their own mastery of their crafts. In 2015, we can still peel back layers of John Coltrane's extensive collection of recordings to discover more about a musical giant gone too soon. Follow this Spotify playlist of John Coltrane's work to hear A Love Supreme and much more. 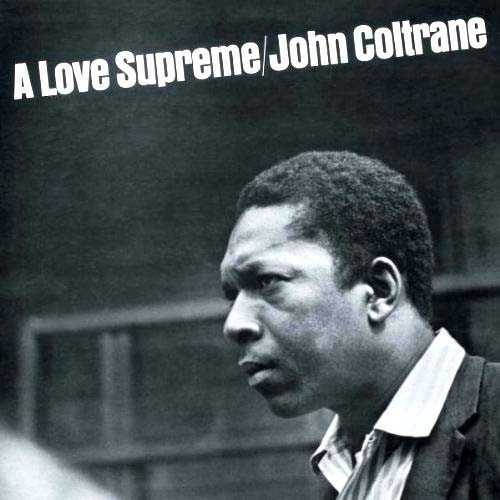