When Comet ISON was discovered and a preliminary orbit for it was worked out, it was initially announced that it could be the "comet of the century."

Of course, the 21st century is only 12 years old (from 2001) and ISON turned out to be a dud. But out there in the far recesses of space there is certainly some unknown comet worthy of such an honorific title that will ultimately put on a unique and memorable show sometime during this century.

Take note that four of these five dazzlers appeared in the latter half of their century and that the average time between appearances amounts to 97 years. Considering that Comet Ikeya-Seki passed by in 1965, the next prospective "Comet of the Century" might not appear — according to our small sampling — until maybe 2029 at the earliest … and maybe not even until the next century (in 2103!). [Incredible Photos of Comet ISON]

Then again, stupendously bright comets are totally unpredictable and can suddenly appear at almost any time.

Greatest Comet of the 16th Century: The Great Comet of 1577

This comet passed to within 16.7 million miles (26.9 million kilometers) of the sun on Oct. 27, but was not sighted until five days later, when it was described in an account from Peru as an exceptionally brilliant object. Contemporary descriptions note that it was seen through the clouds like the moon. 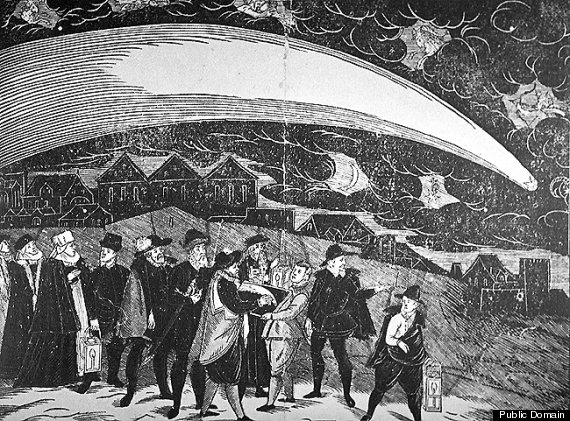 The Great comet of 1577, seen over Prague on November 12. Engraving made by Jiri Daschitzky.

By Nov. 8, it was reported by Japanese observers as a "broom star," appearing "as bright as the moon" with a white tail spanning over 60 degrees (your clenched fist held at arm's length measures 10 degrees). The famous astronomer Tycho Brahe first saw the comet as a reflection in his garden fish pond on Nov. 13, and likened its brightness to Venus. The comet was still as bright as zero magnitude inDecember before it finally dropped below the limit of naked-eye visibility on Jan. 26, 1578. (Magnitude is a measure of a celestial object's brightness, with smaller numbers corresponding to brighter objects.)

Greatest Comet of the 17th Century: The Great Comet of 1680

The great excitement that accompanied the first announcement of the discovery of Comet ISON was that initially its orbit appeared strikingly similar to this spectacular 17th century comet; it was hoped that perhaps ISON was either a return of this amazing object, or at the very least a large fragment. But later calculations showed this was not so. 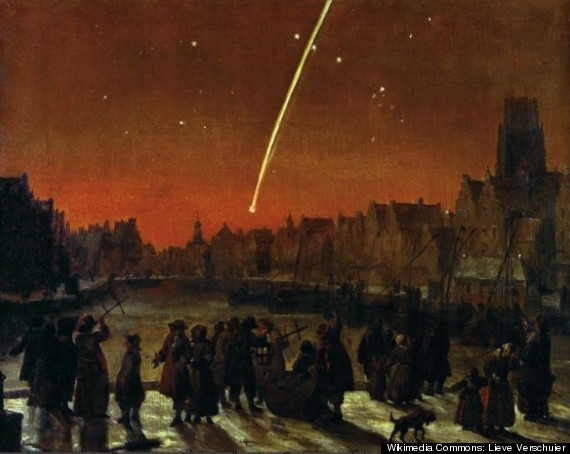 The Great Comet of 1680 over Rotterdam. People in the drawing are using cross-staffs which were early devices for measuring angles and a predecessor of the sextant.

The German astronomer Gottfried Kirch became the first person to ever discover a comet with a telescope when he sighted this comet on Nov. 14, 1680, when it was at fourth magnitude. By Dec. 2, it already had a 15-degree tail and had reached second magnitude (as bright as Polaris, the North Star). On Dec. 18, it was at perihelion (the closest point to the sun in its orbit) coming to within 128,000 miles (206,000 km) of the sun's surface.

At least one report (from Albany, NY) indicates that the comet was visible in the daytime. Several days later it could be seen in the evening twilight sky with a tail stretching straight up from a second-magnitude head from the southwest horizon for 70 to 90 degrees. By Jan. 10, 1681, the tail had shrunk to 55 degrees and by the Jan. 23 it measured "only" 30 degrees, with its head having faded to fourth magnitude. It remained visible to the naked eye until early February 1681.

Greatest Comet of the 18th Century: The Great Comet of 1744

First sighted on Nov. 29, 1743, as a dim fourth-magnitude object, this comet brightened rapidly as it approached the sun. Many textbooks often cite Philippe Loys de Cheseaux, of Lausanne, Switzerland, as the discoverer, although his first sighting did not come until two weeks later. 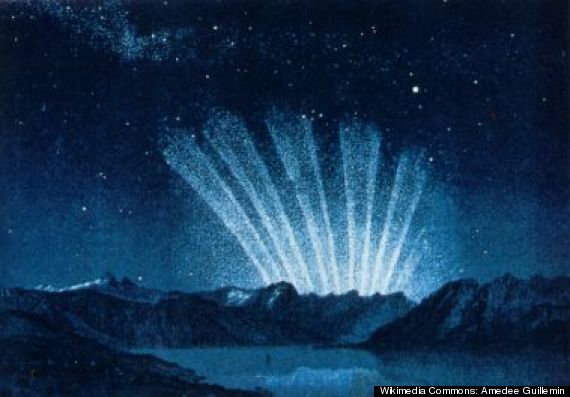 By mid-January 1744, the comet was described as first-magnitude with a 7-degree tail. By Feb. 1, it rivaled Sirius (the brightest star in the sky) and displayed a curved tail, 15 degrees in length. By Feb.18, the comet was equal to Venus in brightness and displayed two tails.

On Feb. 27, it peaked at magnitude -7 and was reported visible in the daytime, 12 degrees from the sun. Perihelion came on March 1, at a distance of 20.5 million miles (33 million km) from the sun. On March 6, the comet appeared in the morning sky, accompanied by six brilliant tails, making it resemble a Japanese hand fan. [The 9 Most Brilliant Comets Ever Seen]

Greatest Comet of the 19th Century: The Great September Comet of 1882

This comet is perhaps the brightest comet that has ever been seen and was a gigantic member of the Kreutz Sungrazing Group of Comets. First spotted as a bright zero-magnitude object by a group of Italian sailors in the Southern Hemisphere on Sept. 1, this comet brightened dramatically as it approached its rendezvous with the sun. 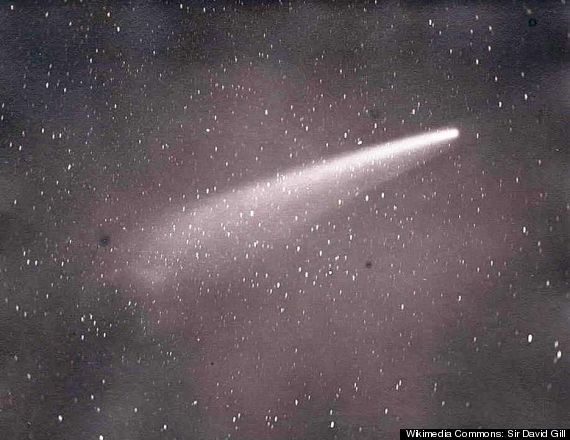 Photograph of the Great Comet of 1882, as seen from South Africa.

By Sept. 14, it became visible in broad daylight, and when it arrived at perihelion on Dec. 17, it passed at a distance of only 264,000 miles (425,000 km) from the sun's surface. On that day, some observers described the comet's silvery radiance as scarcely fainter than the limb of the Sun, suggesting a magnitude somewhere between -15 and -20 (the latter magnitude would register nearly 1,000 times brighter than the full moon!). The following day, observers in Cordoba, Argentina, described the comet as a "blazing star" near the sun.

The nucleus also broke into at least four separate parts. In the days and weeks that followed, the comet became visible in the morning sky as an immense object sporting a brilliant tail. Today, some comet historians consider it a "Super Comet," far above the run of even great comets. [See Amazing Stargazer Photos of Comets from 2013]

This was the brightest comet of the 20th century, and was found just over a month before perihelion in the morning sky, moving rapidly toward the Sun. Like the Great Comets of 1843 and 1882, Ikeya-Seki was a Kreutz Sungrazer and on Oct. 21, swept to within 744,000 miles (1.2 million km) of the center of the sun. 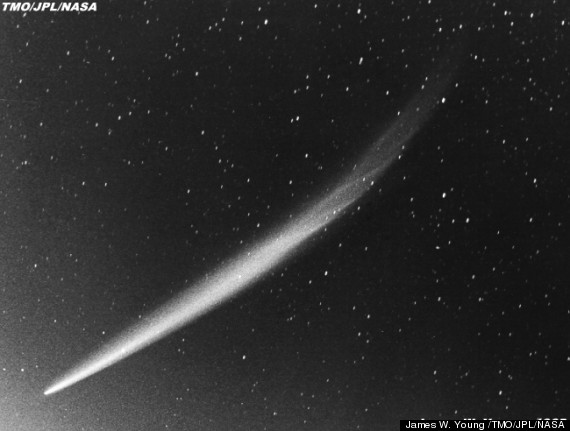 This picture was captured on October 30, 1965 showing the full extent of this great comet's tail of some 30 degrees.

The comet was then visible as a brilliant object within a degree or two of the sun, and wherever the sky was clear, the comet could be seen by observers merely by blocking out the sun with their hands. From Japan, the homeland of the observers who discovered it, Ikeya-Seki was described as appearing "10 times brighter than the full moon," corresponding to a magnitude of minus 15. Also at that time, the nucleus was observed to break into two or three pieces.

Thereafter, the comet moved away in full retreat from the sun, the head fading very rapidly, but its slender, twisted tail reaching out into space for up to 75 million miles (120 million km), and dominating the eastern morning sky right on through the month of November.

ISON fizzled, so we continue to wait…

Joe Rao serves as an instructor and guest lecturer at New York's Hayden Planetarium. He writes about astronomy for Natural History magazine, the Farmer's Almanac and other publications, and he is also an on-camera meteorologist for News 12 Westchester, N.Y. Follow us @Spacedotcom, Facebook and Google+. 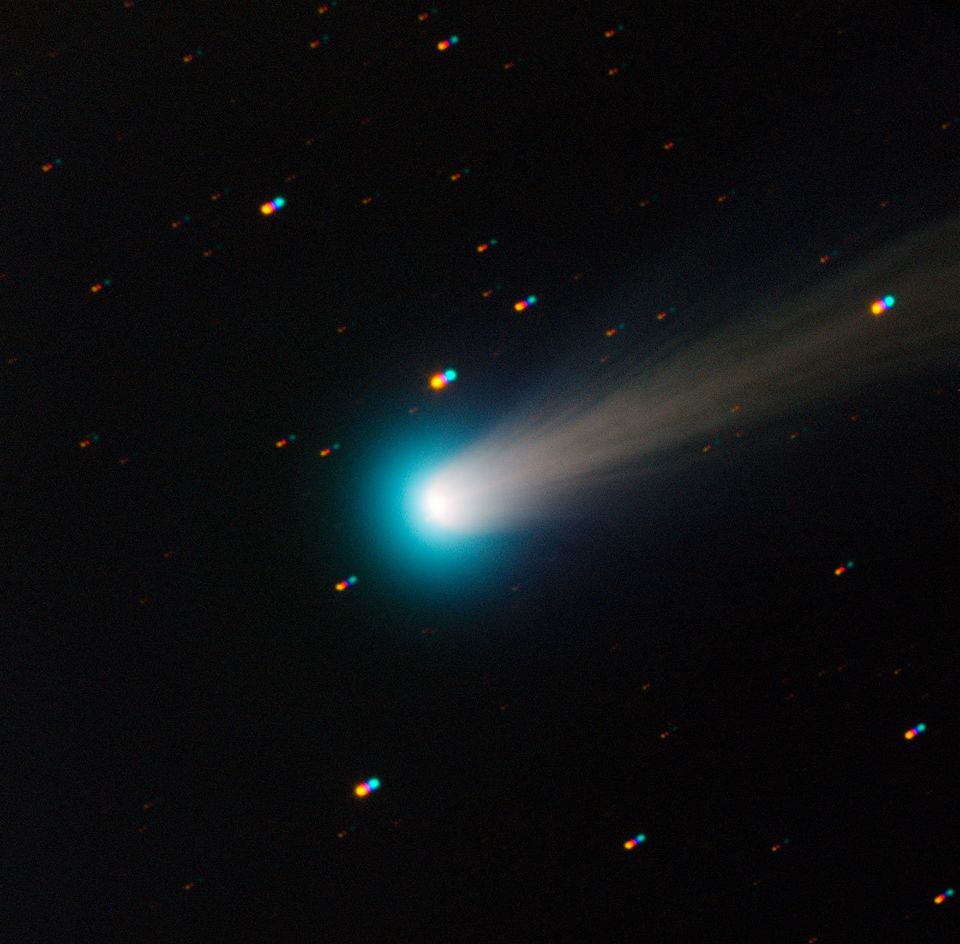 1 / 18
This new view of Comet C/2012 S1 (ISON) was taken with the TRAPPIST national telescope at ESO's La Silla Observatory on the morning of Friday 15 November 2013. Comet ISON was first spotted in our skies in September 2012, and will make its closest approach to the Sun in late November 2013.
ESO