More than 5,000 people from all over the nation, and various parts of the world, including Australia, united on July 28 on the west lawn of the U.S. Capitol demanding Congress take immediate action to stop fracking. After the rally that began at 2 p.m., rally participants marched for more than one hour, stopping at the headquarters of the America's Natural Gas Alliance and American Petroleum Institute.

People impacted by fracking in their communities joined forces with 136 local and national organizations to call on Congress to Stop the Frack Attack and protect Americans from the dangerous impacts of fracking.

"As the increasingly bizarre weather across the planet and melting ice on Greenland makes clear, at this point we've got no choice but to keep fossil fuels underground. Fracking to find more is the worst possible idea," said McKibben.

This weekend's rally was part of the first national event to stop the frack attack. The rally is the culmination of three days of training to further escalate the movement to stop abuse by the fossil fuel industry. Large groups from swing states including Ohio, Colorado, Pennsylvania and North Carolina attended the training and rally to make sure that fracking is a key part of the upcoming election.

"Just weeks ago in North Carolina, our legislature ripped up decades of groundwater protections for rural drinking water, in order to allow fracking and invite in dirty industry campaign dollars. So we add our voices to the national movement calling on Congress to protect our homes, our drinking water and our health by repealing the 2005 oil and gas exemptions," said Hope Taylor, a farmer near Durham and executive director of Clean Water for NC.

Rally participants have three key demands: an end to dirty and dangerous fracking, closure of the seven legal loopholes that let frackers in the oil and gas industry ignore the Safe Drinking Water Act, Clean Air Act and Clean Water Act, and full enforcement of existing laws to protect families and communities from the effects of fracking.

"It is time for us to come together as a people and let the law makers that work for us know that we are tired of being run over by the out-of-control oil and gas industry," said Tillman.

While at the headquarters of America's Natural Gas Alliance, rally organizers delivered six jugs of contaminated water in hazmat suits and then headed to the American Petroleum Institute where a 20-foot-high mock oil rig was smashed to the ground.

This event was a launching point for the movement, and will be followed by events in Albany, NY on Aug. 25, Philadelphia on Sept. 20 and Sept. 21, and subsequent events in other states and regions affected by fracking. 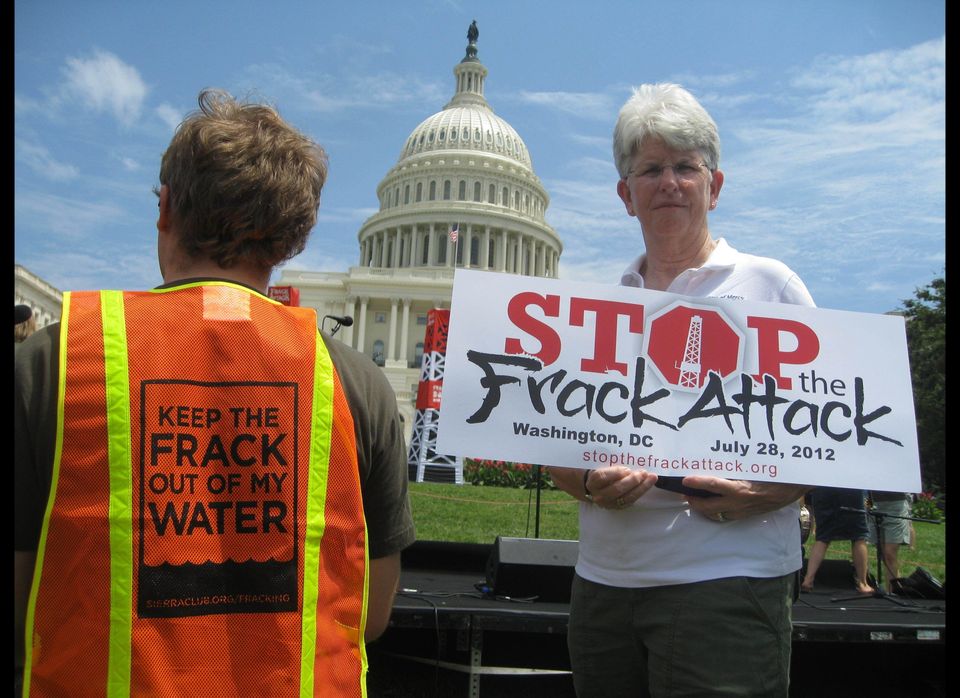