I'll say it up front: I never thought I'd be married to the same man for 50 years. According to Google (and it must be true!), only 5-6 percent of marriages last that long. By anyone's calculations, it's a long time. Think about it. That's half a century. Good grief!

I'm on the very early end -- might even be fudging a year or two -- of the baby boomer group. Many of that era's marriages ended in divorce, at times because women wanted "to find themselves." I remember when one of my friends came over and said she had to find herself. My son, who was about three at the time, overheard her and told me he could help her, "I can find Carol. She's right there in the bathroom." I wonder if truer words were ever spoken.

"Finding oneself" was a pretty common buzzword during those years. I was one of those who decided to "find myself," but for whatever reason, I was able to search in ways that were socially acceptable and didn't upend the family unit. Not that there weren't thoughts of it from time to time. I tease my husband that the only reason we didn't get divorced was that one of us always had the sense to talk the other one out of it. And I'm glad we did.

There's pros and cons to being married this long. A pro is a shared history. He knows who I'm talking about or what my reference to a band or event is. The downside -- he's not only heard my stories -- he's lived them. So much for being the glamorous mystery woman. Fifty years of waking up to me without make-up is a huge leap of faith!

It really never occurred to me that I'd be married 50 years. I thought that was for old people and I certainly wasn't that old. And that's been a lesson to me in and of itself. I wonder if the reason I never thought about it was that then everyone would have a pretty good idea of how old I was. It's not that I ever tried to hide my age. I just didn't think about it. I always thought age was a relative thing, not all that important. But is it? I'm active, healthy, and don't think I look or act "old." But when you've been married 50 years, it probably needs to be addressed.

Wherever we went in the months leading up to the anniversary, my husband would tell everyone, "In June, we will have been married 50 years." Swell. I told people he was really into smart 2 year olds who just happened to be in college when he was there. No one challenged me, but I don't think they bought it.

Then what to do on the actual day? A couple of years ago family members asked where we wanted the party and how many should be invited and how many could we put up at our house. As a boomer who really wasn't into conformity, the mere thought of wearing a menopausal purple dress and corsage while our guests gathered at some local hall and congratulated us made my stomach turn. I politely thanked everyone for their well wishes and told my husband I'd rather go on a trip, just the two of us. Well, yes, I told him, the dog could probably accompany us.

He graciously acquiesced to my strong objections for the big party and found a fabulous rental house right on the beach in Carmel, California. Now that's my kind of a party. The two of us with a good bottle of wine, a fire and roaring surf in the background! Yup, guess we earned it and deserved it. What made it even more special was the appearance of our son and daughter-in-law who flew in from Seattle to be with us. (Wonder if they wanted to just make sure we'd make it to the big day?) We spent a week at the cottage, watching seals and birds and listening to the surf. I could not have asked for a better anniversary, topped off by a wonderful dinner at a Carmel restaurant.

Am I glad we stuck it out? Oh yes. Probably didn't mention, sappy as it sounds, that he still is my best friend. And to think the naysayers said it wouldn't last. We got married six weeks after we met. We actually decided to get married 2.5 weeks after we met. To say our parents were not happy would be the understatement of the half-century. We did have a proper church wedding, but everyone in the wedding party is now divorced. You just never know how life's going to turn out! And even though everyone knows approximately how old I am, I'm glad it turned out this way!

PHOTO GALLERY
Married Couples: Then And Now
Download
Calling all HuffPost superfans!
Sign up for membership to become a founding member and help shape HuffPost's next chapter
Join HuffPost

Senior in Age Only -- Thoughts on a 50th Wedding Anniversary
Married Couples: Then And Now 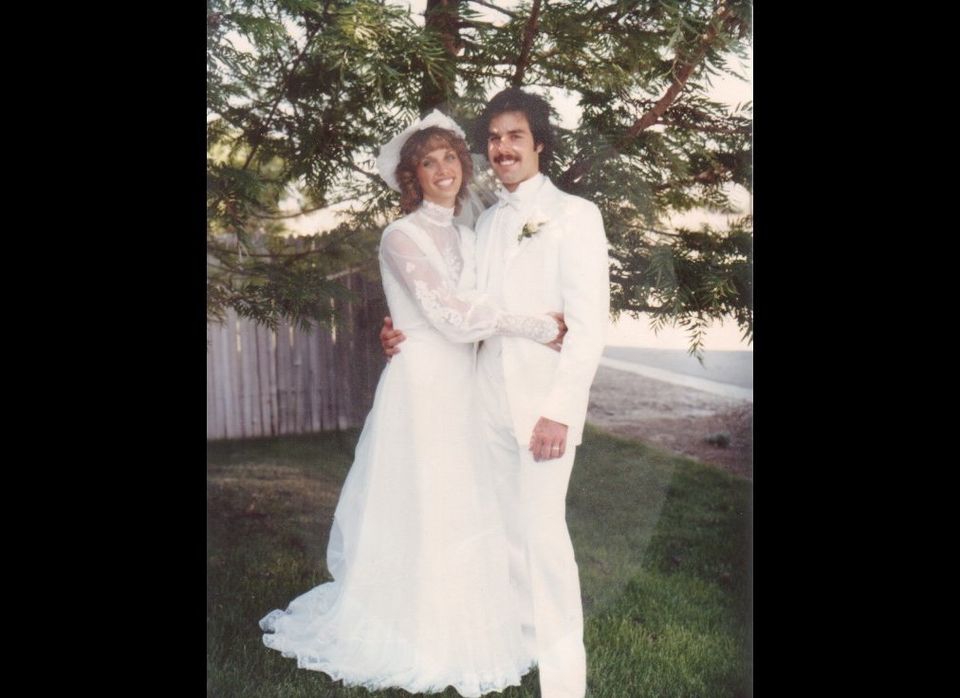