Let's face it folks, Sasha and Malia are adorable.

There's just something about young kids in the White House: JFK Jr. and Caroline, Amy, Chelsea... 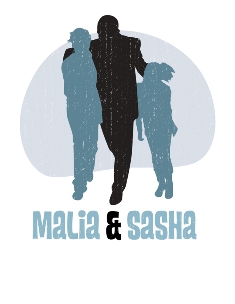 Smiles, laughs, innocence, adolescence -- all these things serve as gentle reminders that the decisions that are made day in and day out in the White House have real consequences, sometimes for generations.

Children help keep things in perspective and remind us of what's really important. They ensure we stay young at heart, even if they make us go gray. And they definitely make sure we don't take ourselves too seriously, even if you are the president of the United States.

"Voters like a family man in a President," says Fordham University Prof. Monika McDermott. "There's a strength there, but also a softness that is appealing. People like hearing about [Obama's] family and seeing him with his family," McDermott added. "It's a very warming, human aspect."

Like all children, Sasha, eleven, and Malia, fourteen (born on the Fourth of July!), influence their parents and open their eyes to a new generation's perspective and outlook on the world, something from which Barack and Michelle are not immune. President Obama even made reference to this fact when he spoke out in favor of the freedom to marry for gay and lesbian people, saying:

Malia and Sasha -- they've got friends whose parents are same-sex couples. And there have been times where Michelle and I have been sitting around the dinner table. And we've been talking about their friends and their parents. And it ... wouldn't dawn on [Malia and Sasha] that somehow their friends' parents would be treated differently. It doesn't make sense to them. And frankly, that's the kind of thing that prompts a change of perspective: not wanting to somehow explain to your child why somebody should be treated differently when it comes to the eyes of the law. -- President Barack Obama, Robin Roberts ABC News Interview

Malia and Sasha make President Obama the tenth consecutive U.S. president who has been the father of at least one daughter. Romney has no daughters. Why buck the trend? ;-)

I encourage you to join in the conversation and share your thoughts on Reason #41 or your own reasons by visiting 52 Reasons to Vote for Obama on Facebook... I'd love to hear from you!