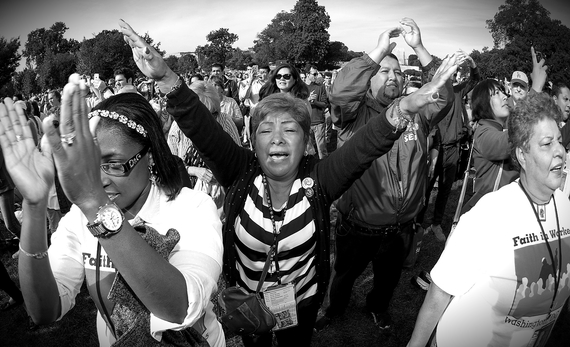 Only days are left before the 5th Circuit Court of Appeals can issue a ruling which the Supreme Court can review on President Obama's deferred action initiatives, better known as DAPA and expanded DACA.

That's days before the lives of 5 million parents and DREAMers are again put on hold -- and again face the risk that going to work or school means risking getting kicked out of their country and leaving their families behind.

But without DAPA and DACA that risk and fear remain. The 5th Circuit has not ruled and time is running out. Without a ruling, this case cannot ultimately be decided by the Supreme Court.

The fact that this serious timeline is upon us undermines our nation's promise -- the very one so many presidential candidates and members of Congress eagerly boast of -- the promise to protect all American families.

Because when we say this wait affects 5 million people, we're talking about real families, not numbers, but everyday people who work, go to school, pray at the pews, buy food in your neighborhood market, and wave American flags on the Fourth of July.

They are daughters and sons; fathers and mothers like Genoveva Ramirez, a 64 year old mother who would qualify for DAPA. She came to this country 14 years ago looking for a better life in the United States for her children. She made Chicago her home.

When most of us are having dinner with our families and putting our children to bed, Genoveva is working vigorously all throughout the night as a janitor. She works hard, pays her taxes, owns her own home and enjoys spending time with her grandchildren and great-grandchild.

Last year, Genoveva was driving home after finishing her night shift when she was pulled over by policeman for not using her blinker light. Genoveva was questioned about her immigration status, arrested, held in detention, and almost set to be deported immediately. Those two weeks were her worst nightmare.

This caring and law-abiding grandmother, mere years from a retirement she will forgo in order to help her family, feared that she would never see her children and the grandchildren whom she helped raise.

Thanks to members of her community, Genoveva was released from detention after two weeks and authorities decided that she was not a priority for deportation given her clean criminal record and ties to her community.

Today, she is an active member in her community and supports other women who face deportation. Last month, during the Pope's visit to the U.S., Genoveva walked the 100 miles with The 100 Cities, 100 Miles Women's Pilgrimage from Pennsylvania to Washington, DC to call for immigration reform.

Genoveva's story and determination reminds us of our past and present American life: an immigrant in pursuit of happiness, safety and a dream.

She represents what we call the "mixed status" family... or really, today's modern family from legal permanent resident children to U.S. citizen grandchildren. She is the matriarch of the American family we've always known - the Italian nonna, the Greek yaya, the Irish mamó.

And just like before, our leaders must support fair and just immigration reform. It's time: Not just for our leaders, but for the 5th Circuit to deliver on the justice they swore to administer.

So help them God.

2016 is coming and if we've learned anything from our American past, it's that we will exercise our right to speak out and vote.