This post is part of the Global Moms Relay. Every time you share this post, Johnson & Johnson will donate $1 (per action), up to $325,000, to four causes helping improve the health and wellbeing of moms and kids worldwide: MAMA, Shot@Life, U.S. Fund for UNICEF and Girl Up. Scroll to the bottom to find out more.

Last year I helped launch The Girl Project, Glamour's initiative to help girls everywhere get the educations they deserve. Of all of the incredible work I get to do at Glamour -- the Women of the Year Awards, putting heroes like First Lady Michelle Obama on the cover -- this is the stuff that fires me up most. Why? Because this next generation of girls has really got something. They are smart, passionate and hell-bent on leaving the world better than they found it. Don't take my word for it. As part of the Global Moms Relay, I spoke with Celia Buckland, a sophomore at New Trier High School in Winnetka, Illinois (straight after a chemistry exam, no big deal). She preached truth about just about everything you need to know about living an exciting, purposeful life. The high points of our conversation:

"People like to say that social media campaigns aren't involved enough," Celia tells me. "I think it's just part of the way that activism is evolving. Look at #BringBackOurGirls. People all over the world are supporting those families and girls, which isn't something that would've happened even just a few years ago. Having protesters come together on Twitter or mobilize on Facebook -- it's so powerful. Yes, it's just a piece of the puzzle, but it's an important one, especially with young people. We shouldn't discount it."

2. Ask Your Grandmother -- She Knows Everything

"I come from a line of strong women. My great-grandmother lived in eastern Russia, and her family was killed by the Bolsheviks. She became a street performer in Shanghai, then moved to the Philippines. She and my grandmother were put in a prison camp there," Celia says. "My great-grandmother lived through war, lost her husband, her family. But she, and my grandmother, became incredibly powerful and resilient. You don't always need to look beyond your living room for inspiration."

"There's a bill called the Girls Count Act that will authorize the United States to help girls in developing countries to get birth certificates and other documentation. My Girl Up club made more calls to our local representative than any other club in the country, and our representative co-sponsored the bill. Through this small act we learned about the different branches of government -- how bills and laws get made. The stuff you learn in AP U.S. History but really only understand in theory. We can't vote yet, so it was great to engage our government like this. We got to watch as it passed the House and the Senate -- and just this week, it was signed into law by the President. That's incredibly cool!" 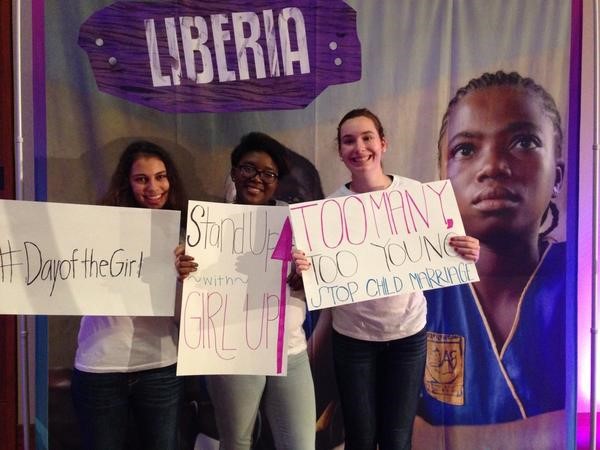 "The things the Girls Count Act is fighting for -- documentation like birth certificates and identification cards. Those don't even feel like benefits to us, and they are game-changing for people in other parts of the world," says Celia. "We're so fortunate to be born into the society we're born into, and that makes me feel we are obligated to help other girls across the world."

5. Is It Hard to Change Things? You Bet. Do It Anyway.

"The things I want for the world -- a future where all girls are equally respected members of their communities -- will be hard to accomplish. They will mean undoing deeply engrained cultural norms. But if we take small, pragmatic steps -- give a girl a pencil, see what she does with it; give a woman a microloan, watch her start a business -- we can get there." 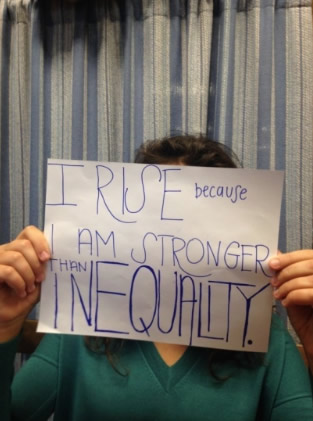 "We have so much to learn from each other," says Celia. "The fight for gender equality and common respect are totally interconnected."

All photos courtesy of Girl Up / UN Foundation.

You share, they give: Each time you 'like' or share this post via the social media icons on this post or comment below, Johnson & Johnson will donate $1 (per action) up to $325,000, to improve the health and wellbeing of moms and kids worldwide through MAMA, Shot@Life, U.S. Fund for UNICEF and Girl Up. $1 means one day of school for a girl in Guatemala through Girl Up.

You can also use the Donate A Photo* app and Johnson & Johnson will donate $1 when you upload a photo for Girl Up or UNICEF, up to $100,000. You can help make a difference in seconds with the click of your mouse or snap of your smart phone.

Share this post with the hashtag #GlobalMoms, and visit GlobalMomsRelay.org to learn more. The United Nations Foundation, Johnson & Johnson, BabyCenter and The Huffington Post created the Global Moms Relay with a goal of improving the lives of women and children around the globe.