If you are not aware of the horrors of factory farming, then you are not paying attention. Treating animals like heads of lettuce -- "Forget it's an animal," said one farmer magazine -- has created institutionalized ruthlessness toward animals, workers and the environment at the same time it harms humans who eat the products. Factory farming even damages the economy thanks to meat-related obesity, diabetes, heart disease and cancer and greedy, short-sighted land-use policies. Eating has never been a more political act.

While many procedures on factory farms are cruel, some practices like breeding animals into mutant-like parodies of their original species and violating mother/offspring bonds are truly crimes against nature. 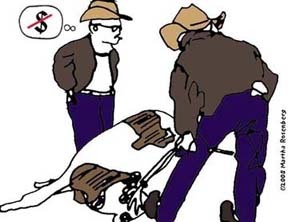 Male calves are an unwanted byproduct of the dairy industry to keep cows pregnant and yielding milk. Calves to be sold for "bob veal" arrive at slaughterhouses weak and injured, testified a federal meat inspector to Congress.

"[After their truck journey, they are forced to endure] yet another 12-18 hours without food, when already they had been deprived of sustenance for perhaps days, since they were usually removed from their mothers immediately after birth," said veterinarian Dean Wyatt. "It always broke my heart that employees would carry the bodies of these dead baby calves out of the pen because they died of dehydration and starvation."

Male calves not sent to slaughter at birth are grown for marketed veal products in crates in which they can't turn around or in outdoor sheds.

Of course, such treatment is tolerated because the allegedly dumb animals don't know what's happening to them or don't suffer psychologically. But undercover videos clearly show mother cows rushing after their babies as they are taken away for veal. And the haunting bellows of mother cows deprived of their young are so loud, they regularly inspire people living near the farms to call the police. The newborn calves also know their loss. Calves being sold at Cambridge Valley Livestock Market for $40 a head, some with their umbilical cords still attached, swarmed a Rolling Stone reporter who entered their pen.

"Since being ripped from their mothers, they've barely been fed and will nurse anything resembling a teat," he wrote. "They find one, of sorts, in my leather jacket. Its worn-in hide must taste like love."

Like male calves in the dairy industry, male chicks are unwanted by-products to the egg industry because they won't turn into laying hens. While the egg industry regularly disputes the mistreatment of grown laying hens documented on many videos -- sick, infected, featherless hens sometimes standing on dead cage-mates -- they do not dispute the fate of newborn male chicks: They are ground up alive in a process called "maceration."

"There is, unfortunately, no way to breed eggs that only produce female hens," said spokesman United Egg Producers Mitch Head to the Associated Press after release of video showing the newborns being fed into the blades.

"If someone has a need for 200 million male chicks, we're happy to provide them to anyone who wants them. But we can find no market, no need."

Other egg-related industry tactics, while not as cruel, are just as shocking. In 2008, the USDA caught Tyson injecting antibiotics, directly into the eggs, according to the Associated Press, despite its "no antibiotics" advertising claim. Tyson spokesman Gary Mickelson said the vaccinations with the human antibiotic gentamicin are "standard practice," though the drug is far from harmless and comes with a rare black box FDA warning for renal, auditory and vestibular toxicity. Eggs with embryos are also sprayed with ammonia, phenolics and peroxides. They used to be fumigated with formaldehyde, but the Occupational Safety and Health Agency (OSHA) objected -- those nannies.

Animal husbandry can be practiced in a way that an animal only has "one bad day," but thanks to factory farming, which packs animals together over their own waste, they endure a lot of additional suffering. For example, chickens are "debeaked" during their second week of life "to prevent cannibalism and feed wastage," says an online for chicken growers -- though the industry's abusive battery egg cages, not the animals, are responsible for the "cannibalism." Debeaking, partial or total removal of a bird's beak with a hot knife or laser while it is fully conscious, causes "intense pain, shock and bleeding," said veterinarian Nedim C. Buyukmihci, emeritus professor of veterinary medicine at the University of California. A similar fate awaits pigs who respond to unnatural conditions by biting each others' tails. The factory farm solution? Cut off their tails with pliers and no pain killer -- an institutionalized mutilation called tail docking.

Cows also have their tails docked for what factory farmers call "hygiene" and "milk quality" reasons as well as their horn buds burned off with no pain killers. When video footage depicting both procedures at Willet Dairy in New York state aired on ABC's Nightline, there were calls for laws against the cavalier cruelty.

Debeaking, tail docking and horn bud burning are not factory farming's only mutilations. Animals also endure "dubbing," the removal of combs on birds, detoeing and declawing, and mulesing -- the removal of a sheep's hindquarter skin. If veterinarians practiced the same procedures on pets without pain killers, they would lose their licenses and face criminal charges.

Martha Rosenberg is an investigative journalist covering the food, drug and gun industries. Her Random House exposé, Born with a Junk Food Deficiency, was cited in the Amercian Society of Journalists and Authors 2013 Outstanding Book Awards and featured on CSPAN.