Take a look around your house. Is every outlet being used -- or almost? In the kitchen, you have a coffee maker, microwave, the fridge, a TV. In your bedroom, an alarm clock, phone charger, another TV. 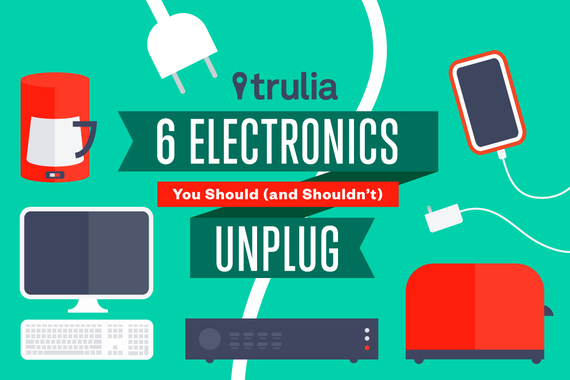 Did you know that those gadgets -- the ones that are always plugged in -- are constantly adding to your electric bill? It's called phantom power use: Even when not turned on, these devices are using power just by being plugged in.

It's estimated that households on average have 40 appliances that are constantly using power, contributing to 10% of household energy use. That adds up to about $100 a year.

So do yourself a favor and unplug those devices you aren't using all the time. Here's a short list of which ones you definitely should unplug, and those you can afford to leave plugged in.

Obviously there are some kitchen appliances that would be unwise, and almost impossible, to unplug. But others are worth the extra effort. Coffee makers, food processors, microwaves, and the like are easy to unplug but not so easy on the power grid. See the digital clock on your coffee maker and microwave? That clock means it's using energy. So if you don't need to know the time at opposite ends of the counter, go ahead and unplug.

We're probably all guilty of leaving our chargers plugged in. From our phones and laptops to cordless phones and electric toothbrushes, those chargers are adding to your electric bill every minute they're not actually charging. So once your device is at 100%, unplug it.

One of the worst offenders of wasting power is your entertainment system. Think of all those little LED lights blinking at you from the TV, cable box, and maybe even your stereo system. These are all wasting energy. While unplugging all your devices each time you've finished your favorite show just to plug them all in again and wait for them to reboot may not be very practical, unplugging them all when you leave for vacation is a smart idea. Or if you're really committed to the idea, just unplug them as you leave for work in the morning; at least you'll be saving eight or so hours of energy.

Screen savers don't save a thing. And standby or sleep mode isn't making much of a difference either. Make it a habit to unplug your computer every night. Not only is this a real energy saver, but it also can protect your computer from serious damage. It's not an old wives' tale -- a power surge caused by lightning can completely fry your computer. To be on the safe side, at least unplug your computer during a storm.

While most electronics do use small amounts of power when plugged in to power digital clocks, buttons, and so on, older models usually don't have all those bells and whistles. For example, state-of-the-art washers and dryers with digital displays will certainly use power when turned off, but older models and less fancy options with manual dials most likely won't.

One gadget you can definitely leave plugged in -- and should probably have more of -- is smart power strips. Let's say you plug your computer, printer, scanner, etc, into the power strip. If you flip the switch on the power strip, power will be cut off to all your devices. But that also prevents phantom power usage. Easy-peasy!